The Daily Nexus
Tennis
UCSB Completes Weekend Sweep in Pair of Home Matches
February 19, 2018 at 4:30 am by Brandon Victor 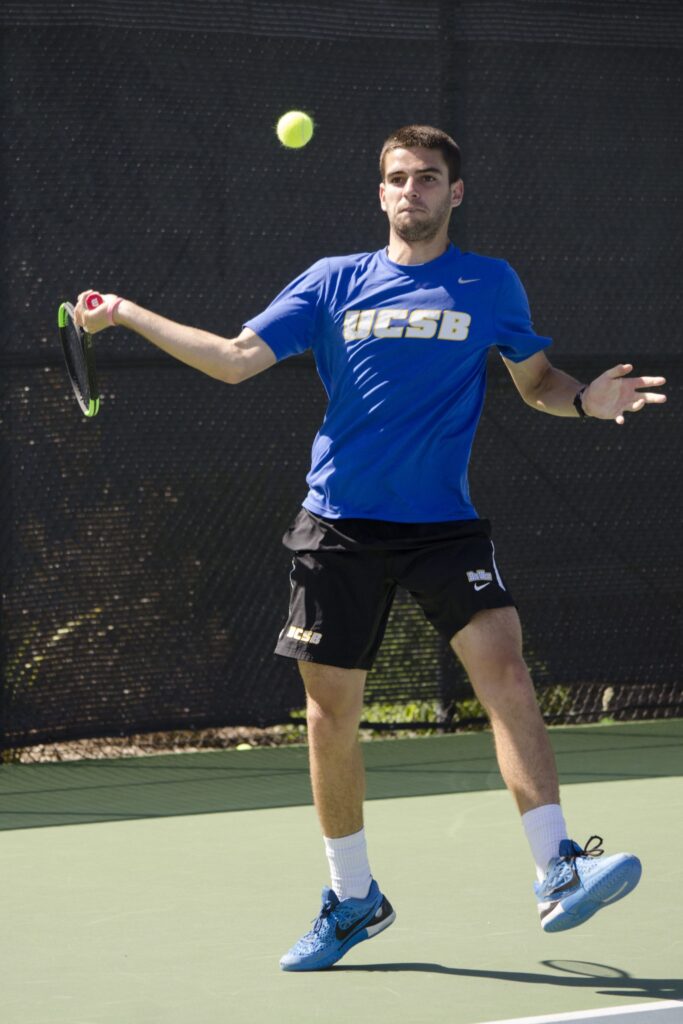 Santa Barbara now sits at 5-2 on the season, including a 3-0 home record. USF fell to 2-4 after being handed its third-straight loss. The losing woes continued for Pacific too, as the Tigers lost their fifth consecutive match and are 1-8.

Despite dropping the doubles match on court one, the Gauchos were able to secure the doubles point when senior Simon Freund and freshman Joey Rotheram defeated their opponents 6-2 on court two, giving Santa Barbara some much needed momentum heading into singles play.

“I love the fact that we feel like we can win on every doubles court this year,” Freund said. “Last year we were dominant on doubles courts one and two, but three was always up in the air. I’m really glad court three stepped up today and got us the first doubles win.”

In singles, it was freshman Henrik Atlevi who secured his first ever match victory for the Gauchos after a last second substitution for Rotheram on court six due to injury. Sophomore transfer Joseph Guillin then handled his opponent in two sets on court four, 6-4, 6-3, to give UCSB a comfortable 3-0 lead.

But USF continued to battle. On court one, junior Nicolas Moreno de Alboran took the first set, 6-1, but fell behind early in the second set. After finding himself behind 4-3 in the set, Moreno de Alboran used his strong serve to catapult him into the lead. He was able to tie the match at five, and ultimately won the set 7-5 to give the Gauchos the victory over USF.

“We know a team like this will never go away,” Freund said. “I’m really glad we kept fighting and kept going.”

Even after UCSB clinched the match, it was able to get confidence-boosting victories on the remaining courts. On court three, after struggling in doubles and dropping the first set, junior Anders Holm bounced back to take the last two sets. And on court two, Freund also came back from a 1-0 set deficit to get a key personal victory.

“That was a very important victory for me personally because I’ve been struggling a little bit and I really needed to get a good win on the board,” Freund said.

In their victory Sunday over UOP, the Gauchos started off quickly once again behind improved play from court one tandem Holm and Moreno de Alboran. Despite their saturday loss, the duo combined to defeat the number 24 doubles team in the nation, senior Bernardo Oliviera and sophomore Akram El Sallaly.

“I think yesterday we focused too much on the [other team] rather than us,” Moreno de Alboran said. “Today we just wanted to play the tennis we like to play, and even though we went a break down early we didn’t let it affect us.”

Just like on Saturday, court six put the Gauchos up in front 1-0; this time, however, it was Rotheram who did the job, finishing off his opponent in consecutive sets. Freund then followed his victory yesterday on court two with a dominant victory in straight sets as well, putting UCSB up 3-0, meaning the team needed only one more point to secure back-to-back victories.

“I feel like the forehand is definitely my best shot,” Moreno de Alboran said.  “When I have time with it, I can hit it big … my coach always tells me to look for it.”