The Daily Nexus
Sports
Gauchos Dismantle Irvine by 28 points for Third-Straight Win
February 19, 2018 at 5:00 am by Calvin Thrift 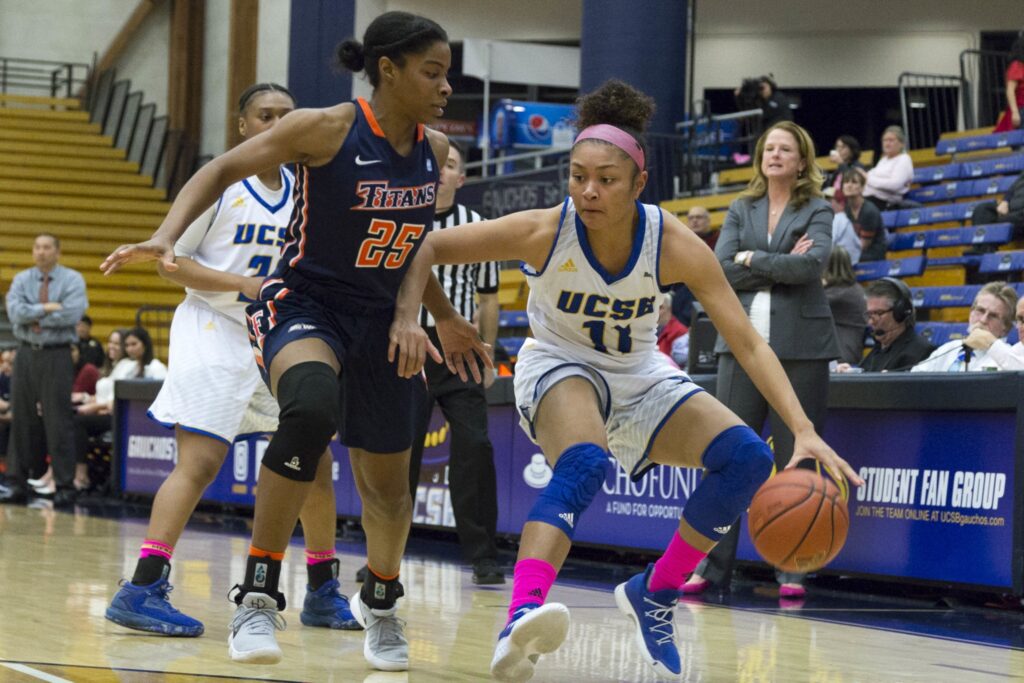 “We didn’t stop attacking,” Head Coach Bonnie Henrickson said. “We stayed aggressive and we buckled down and still defended when we couldn’t score. Those two things we haven’t been consistent with but we were pretty good tonight. We kept our foot on the gas pedal.”

The Gauchos have won their last three games and are now tied with rival Cal Poly for third in the Big West at 8-5 in conference play and 11-14 overall. With the loss, Irvine remains second in the Big West standings at 9-3 and 17-9 overall.

A barrage of scoring late in the first quarter and into the second gave Santa Barbara its early lead. Redshirt senior forward Drew Edelman tallied another double-double with apparent ease as she recorded 12 points and 15 rebounds. It was Edelman’s fourht double-double finish in the team’s last five games.

Fellow redshirt senior point guard Drea Toler joined Edelman with a double-double of her own that featured 10 points and 10 assists.

Makala Roper’s game-high 15 points combined with Sarah Bates’ 11 and Sarah Porter’s 12 put the game out of reach for Irvine.

In the first quarter, both teams got into foul trouble early, as Bates picked up two fouls and Irvine’s star junior guard Morgan Green got called for her third foul around the five minute mark.

An odd display of foul calls paired with back and forth scoring resulted in Santa Barbara and Irvine being tied at 12 following a jumper by Roper with 3:10 remaining in the quarter.

A minute later, Irvine took the lead via freshman forward Jordan Sanders’ mid-range jumper. Unfortunately for Irvine, Sanders’ shot would be the Anteaters’ last field goal until 4:22 remained in the second quarter.

Down 14-12, the Gauchos flipped the script on Irvine in a huge way. Sophomore guard Aliceah Hernandez sunk a three to start the scoring-frenzy for Santa Barbara, which featured two more threes from Roper, an Edelman layup and a Tal Sahar buzzer-beating corner three to close out the quarter up 26-15.

UCSB started the second quarter on a 9-0 run as part of its 23-1 run carried over from the end of the first.

Edelman scored six-straight herself and another Sahar three-ball made it 35-15 in favor of the Gauchos. Down 20, Irvine finally got a shot to fall junior guard when Andee Ritter knocked down a jumper.

The Anteaters made just 3 of their 13 shot attempts in the quarter but avoided the 20-point deficit at halftime, as they trailed 40-24. Irvine’s struggle to scoring nine points in the quarter was due much credit to UCSB’s defensive prowess during the game as the Anteaters had reached triple digits in scoring twice in their last three games.

After sitting out for the entirety of the second quarter with two fouls, Bates knocked down a three to start the second half and followed it up with a jumper for five-straight points.

The freshman guard Bates continues to impress this season, as she scored 7 of her 12 points in the third to maintain the Gauchos comfortable lead.

Haleigh Talbert knocked down a jumper for Irvine just over the 6-minute mark and a 9-6 run by Irvine put the Anteaters within 18 to start the fourth.

The final quarter opened with yet another bucket from beyond the arc via Roper, extending UCSB’s lead to 21. Sophomore center Natalia Bruening gave the Gauchos good production off the bench, as she scored five points in the fourth and allowed Henrickson to rest Edelman when needed.

Bruening’s layup and then another Roper three-pointer gave UCSB a 24-point lead with still over 8 minutes remaining. A short burst of scoring from Irvine placed the Anteaters within 16 at the 6-minute mark, but their Hack-a-Shaq strategy of fouling Drea Toler everytime she got the ball didn’t play out well for them.

UCSB made 13-of-22 free throws in the fourth quarter to secure the win down the stretch. Toler herself was 8-14 from the line and had 10 points as part of UCSB’s 29-point quarter. Despite managing a 20-point quarter as a team, Irvine simply couldn’t catch up to the hot-handed Gauchos, falling 82-55.

Morgan Green, who came into the game averaging 24.5 points per game, got locked down by UCSB. The Gauchos switched on screens to contain Green and forced her into 9 turnovers on 0-8 shooting from three.

Green led her team with 13 points on a less-than efficient night finding the net. Irvine shot 29.9 percent from the field and only 10.5 percent from beyond the arc.

Santa Barbara outrebounded Irvine 51-37 and outscored the Anteaters in the paint 24-18, but it was UCSB’s capitalization off turnovers that separated the two teams. While UCSB committed 22 turnovers, Irvine turned those turnovers into only 13 points whereas the Gauchos converted Irvine’s 19 turnovers into 31 points.

On a three-game winning streak and tied with Cal Poly for third in the Big West, the Blue-Green rivalry this coming week will have high stakes for each team seeking to make a run in the standings as conference play nears its end.