The Daily Nexus
Tennis
UCSB Returns to Play With Matchups Against St. Mary’s and No. 15 Cal
February 15, 2018 at 5:04 am by Andrew Bishop 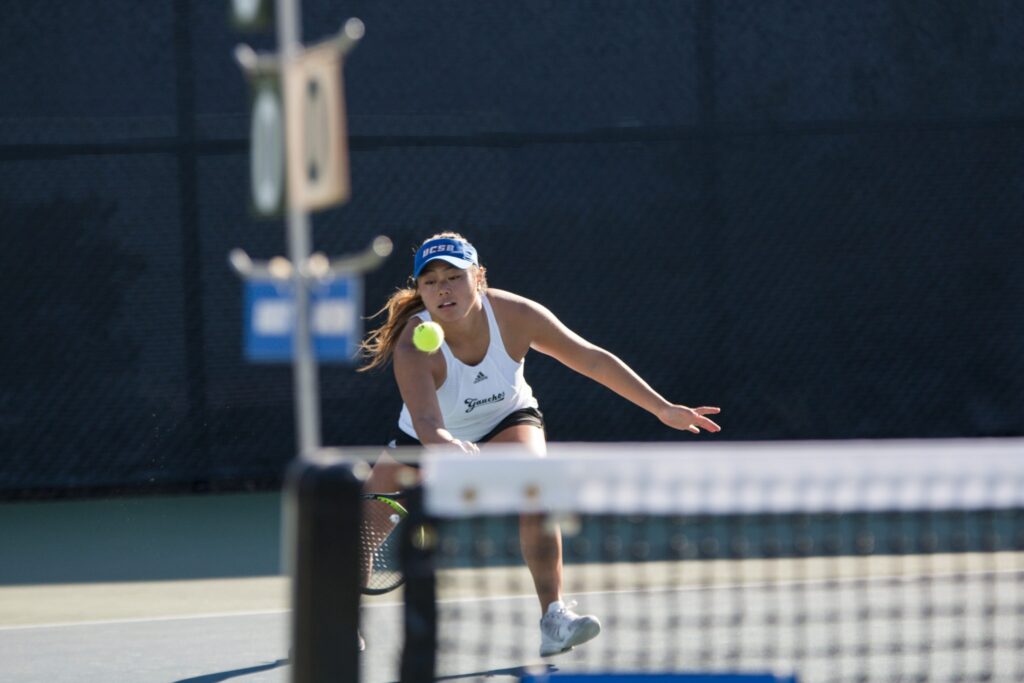 After a much-needed weekend off, the UCSB women’s tennis team will travel to the Bay Area to compete against Saint Mary’s of Calif. on Saturday, followed by the No. 15 California on Sunday.

The Gauchos have spent the past weekend recovering from their strenuous weekend before, which consisted of three matches over just two days. After a decisive 7-0 loss to Pepperdine on Feb. 2, the Gauchos split their home opening matches the day after with a 4-0 victory against the University of San Francisco and a nail-biting 4-3 loss to Kansas State.

After going 1-2 during the weekend of their home opener, Head Coach Simon Thibodeau knew his players needed some time to recover and work on aspects of their game that might need improving.

“With three matches in two days with one player injured, we just tried to take a nice week off,” Thibodeau said. “We were back at it [Monday] morning, hitting with more heights and more consistency and always better percentage shots. We served a bit more and played points with more discipline, and we’ll play in more point situations as we lead up to the matches.”

As things appear to be back in full swing, the 3-4 Gauchos gear up for a challenging Saturday matchup against Saint Mary’s. The Gaels, who are 2-4 on the season, are a familiar opponent to the Gauchos, who defeated the ’Chos 4-3 last year.

Both Saint Mary’s and UCSB have only one opponent in common this season in No. 13 UCLA, whom they both lost to, 4-0 and 4-2 respectively. Based on last year’s match and their scores against a common rival, it is fair to say that the match slightly favors the Gauchos.

Despite a possible advantage, Thibodeau and his players know they are in for a contentious Saturday afternoon against the Gaels.

“They’re tough. We beat them 4-3 last year, and it took everything, so we’ve got to be ready. We’ll have to just execute and play well at each position. It’s very winnable everywhere, but it’s also very competitive everywhere, so anything can happen,” Thibodeau said.

While the Gauchos currently have their sights set on defeating Saint Mary’s, they are continually mindful of their looming battle against No. 15 Cal on Sunday. The 3-1 Golden Bears have been dominant this season, dropping only one match to another ranked opponent, the then No. 11 ranked University of Texas.

The Bears roster features two nationally ranked singles players in No. 33 junior Olivia Hauger and No. 61 senior Karla Popovic and the No. 40 doubles pairing, which consists of the two as well.

Sunday’s match is shaping up to be one of the most challenging matches of the season for the Gauchos, who are currently 0-3 against ranked teams. Despite the difficult road ahead, the Gauchos are determined and intend on taking things one match at a time without letting their ranked match on Sunday distract them from the task at hand.

“They’ve dealt with a bit of injuries, so we’re looking to go there and try to get two wins. Right now we’re focused on Saint Mary’s, and we haven’t touched Cal too much yet in preparation,” Thibodeau said. “It’s nice to get some ranked wins, but the big picture is really to play well and get better to win the Big West.”

Unfazed by yet another ranked matchup, the Gauchos head into this weekend rested and well prepared in search of finishing the weekend off above the .500 mark.