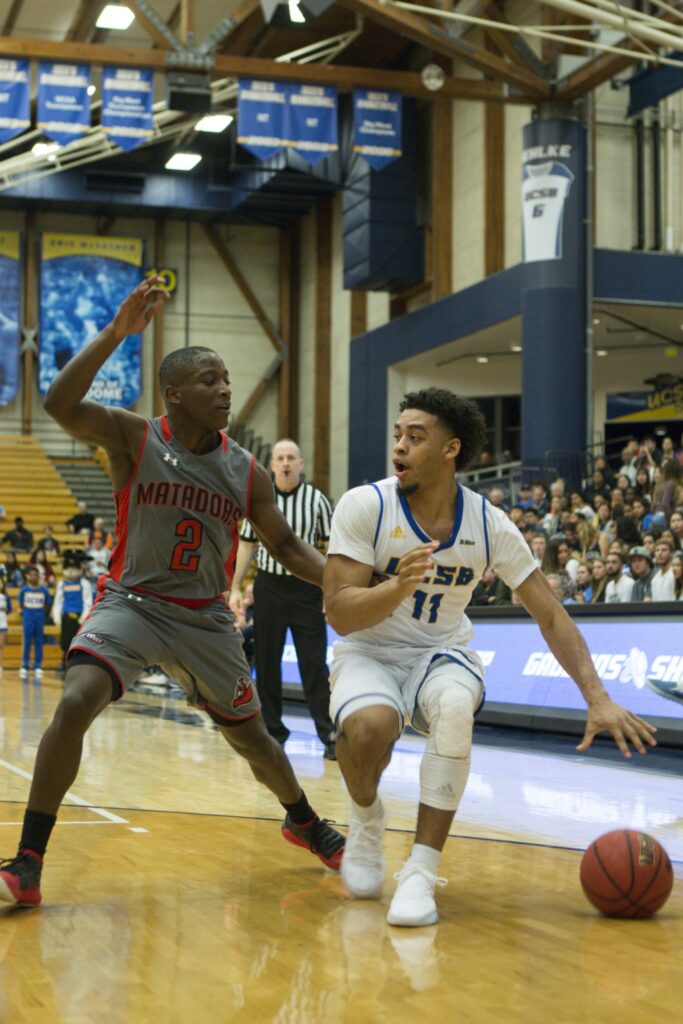 Brandon Davis dribbles the ball before passing it to his teammate. Stephen Manga/Daily Nexus

The UCSB men’s basketball team is riding high. Winners of their last seven games and sitting in first place in the Big West with a conference record of 8-2 and an overall record of 19-5, the Gauchos can afford to be proud of their season so far.

What they can’t afford, however, is complacency.

The next week and a half will likely be UCSB’s toughest stretch of basketball until the Big West Tournament with games against Long Beach State, UC Davis and UC Irvine.

All three teams are within two games of the Gauchos for first place.

It’s a brutal stretch of games, but it’s also a chance for UCSB to solidify its position atop the standings and to set the tone before the Big West Tournament in early March. The road to the NCAA Tournament will likely go through at least one of these three teams, after all.

The first two teams on the schedule, Long Beach State and UC Davis, are both locked in a three-way tie with Cal State Fullerton for third place in the Big West. They are behind the Gauchos and the Anteaters, respectively.

First up are the Long Beach State 49ers, who have struggled against their peers in the Big West standings. The 49ers are 1-4 in games against UCD, UCI and CSUF, with the lone win coming against the Titans back in January.

Those four losses make up the entirety of Long Beach’s conference blemishes.

The 49ers are 7-4 in the Big West, and they have suffered from some bad luck with three single-digit losses.

Offensively, the Long Beach game plan revolves around transfer senior Gabe Levin. The 6-7 forward is averaging a team-high 18.1 points and 7.2 rebounds per game in around 30 minutes of action a night.

Levin has outright led the 49ers in scoring in all but two of their Big West games, and is leading the conference in scoring in Big West play. Unsurprisingly, the senior is key to Long Beach success, and is a common focal point for defenses.

Opposing defenses can afford to focus on Levin because his supporting cast hasn’t done much to make them pay for doing so.

The Gauchos have four players – Max Heidegger, Jalen Canty, Leland King II and Gabe Vincent – between Levin and his next closest teammate in conference scoring.

Part of that is due to junior transfer guard Bryan Alberts’s nine-game absence due to injury, but the Gonzaga transfer has been slow to readjust since returning to the lineup four games ago.

Junior forward Temidayo Yussuf has stepped up to give the 49ers another low post threat, and put up a 17 point, 11 rebound double-double in his most recent game against Cal Poly.

The 49ers will host the Gauchos on Thursday, which plays to a major advantage for a Long Beach State team that is 7-4 at the Walter Pyramid and just 5-8 in away games.

The Gauchos, on the other hand, have proven themselves to be able road warriors with a 7-5 away record, including a major win in Davis over the Aggies most recently.

That win last Thursday is what propelled UCSB to their solitary perch atop the standings, but it’s unlikely to be a comfortable position.

Even if the Gauchos are able to fight off the 49ers on Thursday, they’ll then have to take on the Aggies once more on Saturday, this time in the Thunderdome.

With a home winning streak of 11 games to start the season, the longest such run in school history, the Gauchos have reason to feel confident even against such formidable and motivated guests as the Aggies.

In the first matchup, UCSB controlled much of the game, aside from a strong stretch run by UC Davis to make things close late in the game. Junior forward Jarriesse Blackmon, receiving extra minutes in the absence of Canty, was instrumental late in the game with eight points, all in the second half.

The Gauchos have been able to overcome Canty’s absence due to a suspension for violating team rules, but the team has made no announcements on the timetable for his return. Barring a change in status before Thursday, UCSB will likely have to adapt once again.

Against UC Davis, the Gauchos were able to do so thanks to a balanced team offensive effort. Four players finished in double-digits, with Leland King II leading the way with 19 points and 15 rebounds, his fifth double-double of Big West play.

UCSB won’t be the only team dealing with a mysterious and impactful suspension on Saturday.

UCD’s star forward, Chima Moneke, has missed the team’s last three games after being sent home prior to the team’s Feb. 3 game against Long Beach State.

While the Gauchos are 2-0 without their suspended forward, the Aggies have struggled a bit more, going 1-2 while sliding down from first place in the Big West to a tie for third.

The reasons and timetable for Moneke’s return are still up in the air, so it’s quite possible both teams will once again be shorthanded on Saturday.

Junior guard TJ Shorts II has stepped up in Moneke’s absence with almost 27 points per game in the last three games. Junior Siler Schneider has also taken on an expanded role, but the Aggies haven’t been able to fully replicate Moneke’s production.

The Gauchos have a tough midterms week ahead of them, with two games against teams with a combined conference record of 14-8.

A successful week however, would cement the team’s status as the one to best in Big West play, and push UCSB past 20 wins for the first time since 2009-10.

The Gauchos take on Long Beach State on Thursday in Long Beach at 7 p.m. The ’Chos then host UC Davis in the Thunderdome on Saturday at 2 p.m.