The Daily Nexus
Science & Tech
AWMAT Combines Women in Art with Technology
February 15, 2018 at 12:32 am by Stephanie Pernett

When women help each other, amazing things can happen. That is the principle that is at the core of the Alliance of Women in Media Arts and Technology (AWMAT). Technology is often seen as a male-dominated field, but the community at AWMAT offers a broad range of support, programs and resources to advance women in technology.

One of those resources is the conference they hosted over the weekend. New Perspectives: Innovations by Women Intersecting Science, Meid and Sonic Arts was a three-day conference celebrating the achievements of today’s generation of female media artists who use technology in their work. Women from backgrounds in engineering, music, science, art and many others gave talks on how they were able to take technology and bend it to their needs to create incredible and new pieces of art. 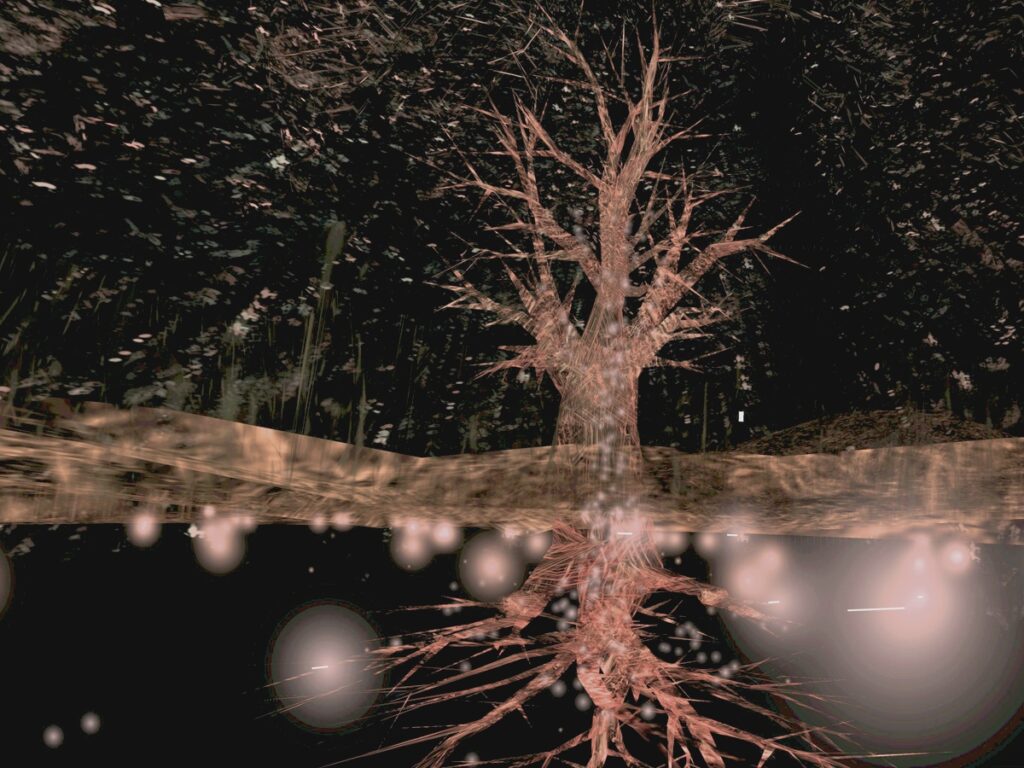 Char Davies experimented with virtual reality and art in the ‘90s. Above is her installation Osmose. It is an immersive interactive vitural reality environment installation with 3D computer graphics and interactive sound, a head-mounted display and real-time motion tracking based on breathing and balance. It is a space to explore the perceptual interplay between the self and the world. / Courtesy of magpieaesthetic.com

One such woman was the keynote speaker during day two, Mari Kimura. Kimura is a violinist and composer known for her original technique that she named Subharmonics. Subharmonics is the production of pitches of sound up to an octave below the violin’s lowest string without returning. This technique has led to her becoming a pioneer in interactive computer music.

In her address, Kimura explains how being at the forefront of her field is something she grew up with.

“[My mother] is the current president of ILO in Japan. It’s the International Labour Organization, and my grandmother was the first Japanese female politician,” Kimura said.

In addition to strong female figures, her father is a pioneer in solar energy, as he designed Japan’s first solar house where Kimura grew up.

Kimura gave anecdotes about how her parents met, how she met her husband and her move from New York to Irvine. While she is successful in her field, she speaks about the sexism her mother faced in Japan and the sexism she faced in the U.S.

“My mom went back to Japan with my dad when she was eight months pregnant with me. She was the only female law student. Then her adviser comes from the other corridor and he says, ‘Oh, Mrs. Kimura, there’s a job opening next month,’ and then she says ‘I’m having a baby next month.’ That was the last job offer she got in three years,” Kimura said.

All these stories and experiences she spoke about were to support her message.

“If you want to advance or if you want to say something about women in academia, give her some help,” Kimura said.

In this instance, Kimura was speaking about her children and the problems other faculty with young children face. Many of the guest speakers got to where they are now because of the help they received from people who supported them.

This idea of helping one another was also seen in Kathy Rae Huffman’s talk. Huffman is an independent curator, currently based between Berlin and Los Angeles. She is also the co-founder of F.A.C.E.S., an international online community for women in media arts.

F.A.C.E.S. was founded after Huffman and her female colleagues in European media arts wanted to answer the question, “Where are the women?” Its purpose is to bring women together in order to form a network among them.

In addition to talking about why it is important to help one another, other guest speakers spoke about how that network could benefit bigger issues, such as climate change.

Victoria Vesna, an artist and professor at the UCLA department of Design Media Arts and the director of the ArtSci Center at the School of the Arts and California Nanosystems Institute (CNSI), spoke about an exhibition she co-curated that challenged reductive, binary mindsets and aimed to foster artistic interventions on feminist and ecological activism.

According the Vesna, even environmentalists who generally refer to non-human nature as the environment, the natural resources for human use and often still hinge on the anthropocentric view are confused with ecologists who see the Gaia.

It is known that hundreds of species of life are disappearing, deforestation is worldwide and increasing global pollution is exacerbated by the rampant consumerism, says Vesna. Denigration of women, people of color, women and animals is connected to the basic dualism of Western culture.

The conference concluded with another keynote speaker, Joan La Barbara, followed by her performance.

It is clear that female artists and technologists are navigating their way through the endless possibilities of the integration of science, technology and digital media, leaving their own mark in an ever-expanding creative and science field.