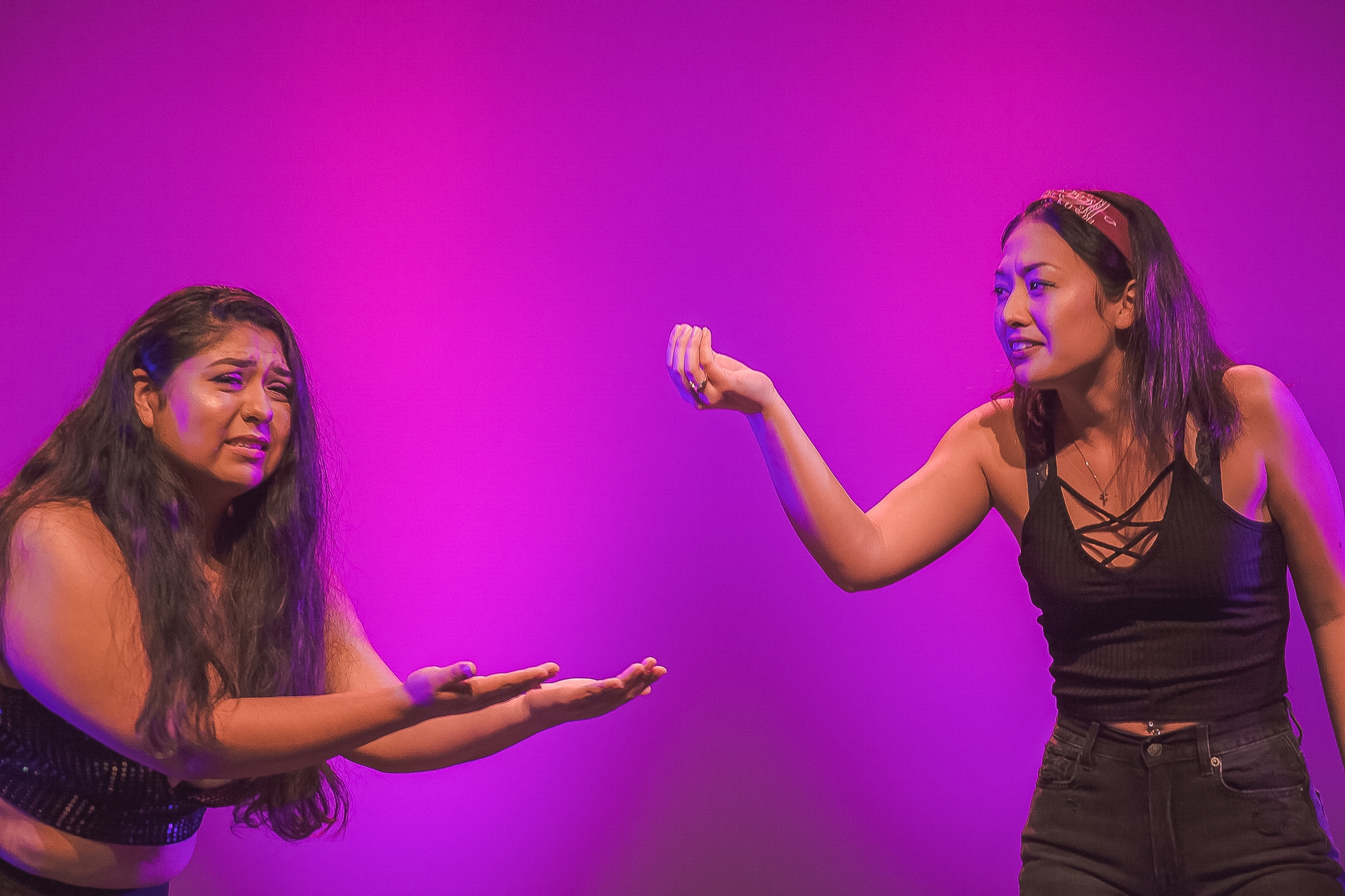 Campbell Hall was filled with a resounding chorus of “Vagina! Vagina! Vagina!” as the UCSB Women’s Ensemble Theater Troupe rang in its annual performance of “The Vagina Monologues” on Friday night. Its successful opening night was one of three possible showings for audiences to attend, with two more being offered on Saturday.

This year’s “Monologues” spoke especially to the increasing diversity and individual empowerment within the feminist movement and within the production itself, but the MC’s did not fail to note that equal representation of all women — regardless of whether those women possess a vagina — is still something that the show has yet to achieve. Yet its monologues and Herstories (pieces written originally by their performers) that spanned different ethnicities, sexual orientations, gender identities, shapes, occupations and experiences seemed to mark a step in the right direction.

The atmosphere in Campbell Hall was buzzing with excitement before the show. Some people were finding seats among their friends, while others were out in the lobby making purchases from an assortment of vagina-related merchandise that the production had to offer, which included anything from “Pussy Pops” to “Vagitarian” T-Shirts. All the proceeds from these purchases went to the Santa Barbara Rape Crisis Center and the One Billion Rising Campaign, a campaign dedicated to ending violence against women.

Two MC’s guided the show’s course, often prefacing monologues and Herstories by explaining their origins or to whom they are dedicated. They immediately made the show an interactive experience by getting the audience involved in the repeated chanting of “vagina.” If there had already been an excited feel in the theater before this moment, it was no match for the exuberance that vibrated throughout the entire hall during this communal chant. It was an exercise in turning the word “vagina” into one of triumph and pride, and it started the performance off in an enthusiastic way.

There was no invisible thread pulling the monologues and Herstories along in a linear fashion — each story was unique from the one before it in both its commentary and in the character(s) who delivered it. Every monologue provided a different depiction of feminism and often did so in order to refute feminist stereotypes.

The Herstory “On Feminism” took every cliché of the feminist persona and targeted them against the performer: a sorority girl who wears bras and likes to have sex with men. She argued that these qualities do not make her any less of a feminist, as feminism does not represent a certain type of woman but instead represents a set of ideals that any individual can live by. In another monologue titled “Because He Liked to Look at It,” the speaker acknowledged the controversy of learning to love her vagina by seeing it through the eyes of a man who loved it first. As the speaker pointed out, this does not follow the archetypical portrayal of a feminist discovering her vagina (without the help of a man). Yet, perhaps these perspectives that do not fit precisely into the mold of what society deems as “feminist” are doing their part to break that mold.

While many of the monologues and Herstories combined humor, wit and metaphor to create messages of empowerment, others used grim anecdotes in order to reflect on the work that still needs to be done to protect women against sexual assault, both in the United States and globally. The monologue “My Vagina Was My Village,” for example, graphically depicted the story of a Bosnian refugee woman who had endured sexual assault at the hands of multiple soldiers over the course of a week. Some of the last words spoken in the monologue were, “I do not touch now.” The performance was a chilling reminder that for so many women throughout the world, the vagina is not associated with strength and love but with pain and suffering, both physical and emotional.

One characteristic that was constant throughout each of the performances was the passion with which they were delivered. Lines were often spoken with fervor, accompanied by unabashed moans and roaming hands if the moment demanded it. During somber performances, the distress and sorrow could be heard palpably in the speakers’ voices. This visceral emotion was especially present during “My Angry Vagina,” as the speaker paced across the stage animatedly venting about the entire existence of tampons. As she spoke, one got the sense that she had the voices of a million women who felt the exact same way speaking though her.

After leaving the audience in hysterics with the classic “The Woman Who Liked to Make Vaginas Happy,” the show was ended with “My Revolution Begins in the Body.” As would only make sense, the body had been commented on frequently throughout the night. It had been explored from the perspective of different heights in the especially creative and insightful Herstory, “The Animal Kingdom of Femininity,” and its universal beauty had been reflected upon in, “An Ode to the Shy Latina.” Throughout the show, the performers had found beauty in every part of the body, and they ended the night with one simple command: “Go ahead, love.”