The Daily Nexus
Music
Femme in Rap: How Black Girls Changed Hip-Hop for the Better
February 13, 2018 at 2:54 pm by Annika Pearson 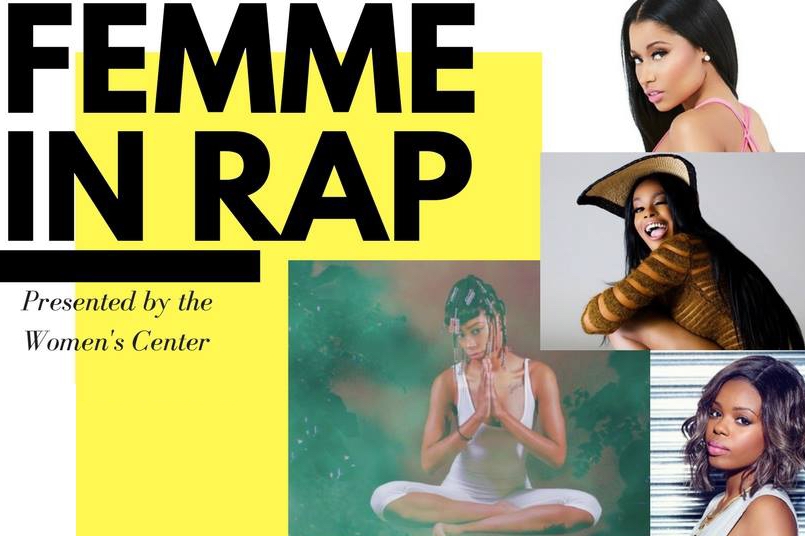 While the lyrics “I got melanin” from hip-hop artist Secrett’s song “Melanin” bounced off the walls of the multipurpose room of the Student Resource Building, fourth-years Gabby Felder and Nkechi Ikem prepared to present “Femme & Rap” last Tuesday, an exploration of the presence and impact of black women in the rap and hip-hop genre.

Twelve female rappers including Azealia Banks, Lorde Narf, Noname and Lil’ Kim filled the opening slide of the Powerpoint titled “Femme & Rap: How black girls changed rap and hip-hop for the better.” Over the course of an hour Ikem and Felder detailed the onset of black female rappers in the industry, labelled the Godmothers, and moved through the first, second and new waves of hip-hop artists. With each artist they emphasized the role that the specific women had in breaking traditional rap binaries as they reclaimed and redefined the misogynistic and homophobic themes and language commonly found in the genre. Members of the audience were encouraged also to voice their thoughts and ideas on the subject throughout the presentation.

Ikem and Felder began by describing the Godmothers, the women who boldly laid the foundation for black femme in rap. Among them were artists Roxy Brown, Queen Latifah and Lil’ Kim. In a highly sexualized, male-dominated genre, they explained that the Godmothers each sought ways to claim and depict their own sexuality. They interpreted Lil’ Kim’s song “Suck My Dick” as an expressive and provocative response to the way the men had been and were talking about women in their own songs. With lyrics like “Look I ain’t tryin’ to suck ya / I might not even fuck ya / Just lay me on this bed and give me some head,” Lil’ Kim confidently inverts the traditional roles of men and women.

Ikem and Felder then transitioned into what they term the “First Wave” of femme rappers. Artists such as Missy Elliot, Eve and Diamond defined this wave in their mission to make rap more fun, “less street” and more accessible to listeners. As public figures, they focused more on chic presentation and their image as fashion icons. The presenters proceeded to show Missy Elliot’s music video for her iconic song “Work It” to explain the light-hearted musical transition the women took.

The presentation next featured Nicki Minaj and Lil’ Mama on the cover of the “Second Wave” slide. In a transitional period for the genre, non-traditional influences and a distinct sense of sex appeal and femininity started to paint not only the new sound of rap but a new face for the genre. The mention of the women’s involvement in pop crossovers was met with laughter from the audience as Lil’ Mama appeared rapping in Avril Lavigne’s music video for her hit single, “Girlfriend.” Ikem called the integration of rock and rap “groundbreaking,” accrediting the women with paving a path for current/rising rappers like Lil’ Uzi. She continued to point out Minaj’s role in “making hip-hop less serious” and “more creative” as evident in her many ad libs throughout her songs. For the next two minutes we listened to “Nicki Minaj’s Favorite Noises Pt. 1,” a hysterical compilation of “Wobbeley wabba wa wat’s,” “owa’s” and “Ishucumonacoo’s” among other ad libs and shout outs that Minaj uses.

Placing their jokes aside, however, Ikem and Felder discussed the racism, colorism and sexism surrounding black femme rappers. In an emotional interview shown to the audience, Banks tackles major issues regarding cultural smudging and appropriation by white female rapper Iggy Azalea, whose success sprouted from a song in which she calls herself a runaway slave master. Despite the growing presence and popularity of black femme rappers, the lack of representation in award shows, magazines, etc. reinforces a much different message.

Ikem and Felder presented last the “Fuck it, I do what I want” rappers including Angel Haze, Mykki Blanco, Young M.A., Siya and Quay Dash who played a major role in infiltrating the cisgender, heterosexual-dominated rap world.

Felder, one of the presenters and a fourth-year ecology evolution and biology anthropology double major, reflected on the importance of the representation of queer rappers: “…Personally growing up as black and queer…seeing these women on screen, seeing the way they act and dress and behave and talk about themselves is relatable to me and something that wasn’t necessarily always seen in other genres of music.”

Femme rappers’ presence has forced rap to deal with the anti-queer undercurrent in both the genre’s artists and music.

Ikem concluded the presentation with this: “[These rappers have] made so many changes such as addressing …homophobia and introducing new beats, so I would be like, take women and femmes in the rap and hip hop genres seriously.”