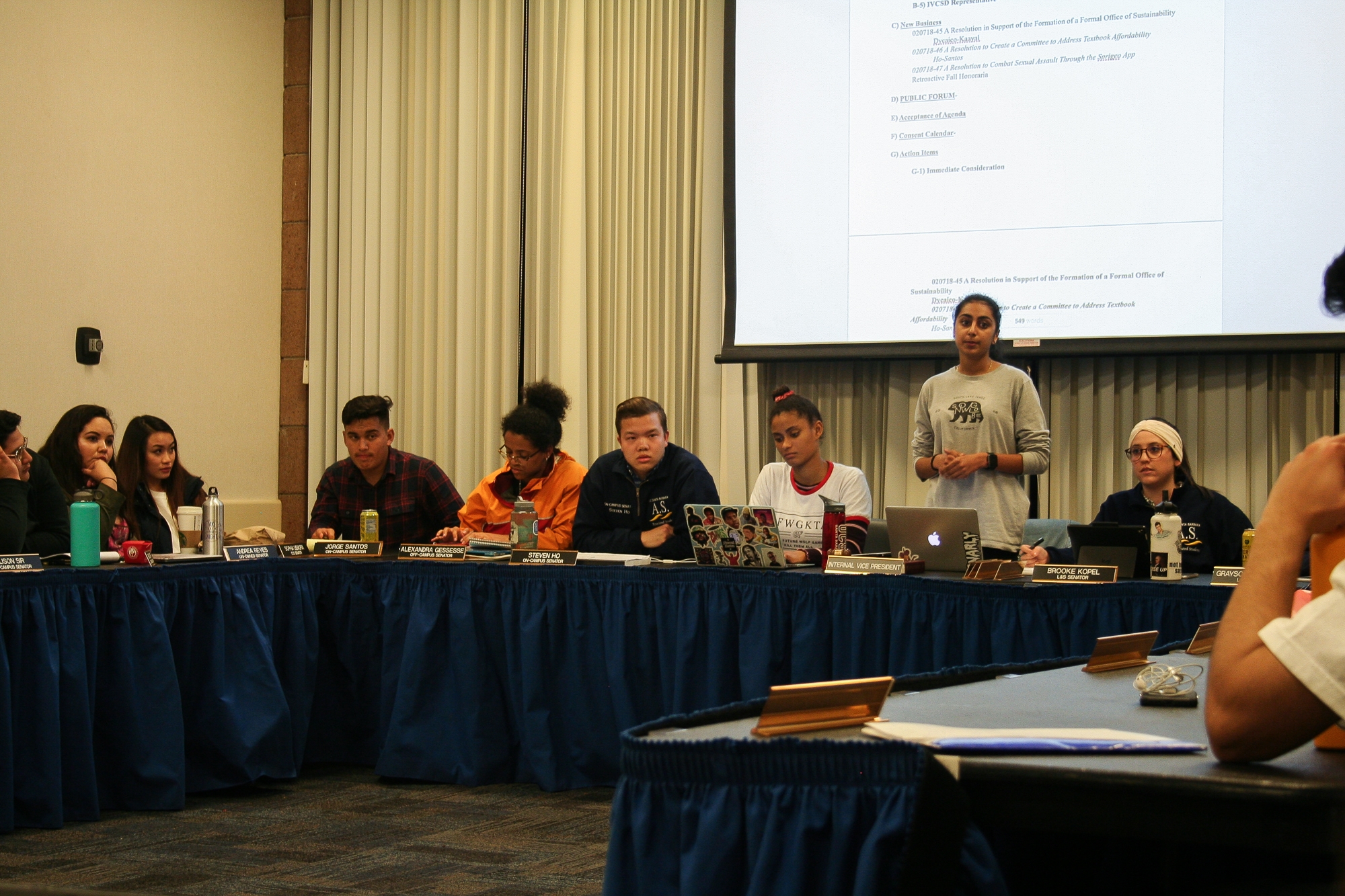 A resolution that would allow students to report sexual assault through a mobile app was introduced during a Senate meeting on Wednesday. Victoria Gurrola / Daily Nexus

The resolution proposing the app was brought to the table at Wednesday’s A.S. Senate meeting. It states that UCSB should partner with Sprigeo, a third-party vendor, to offer students a 24/7 mobile application, webform, text hotline, phone hotline and email hotline to report a crime.

If the Senate passes the resolution, A.S. would establish a contract with Sprigeo for the service and “widely publicize” the app to incoming students as a way to report sexual assault on campus and in Isla Vista.

“The purpose of partnering with this company is that so many resources in Associated Students are available and we pay for them, but no students know they exist or they don’t know how to access them, and that’s a huge issue,” said Senator Kristen Armellini, who co-authored the resolution with Senator Grecia Martinez.

The Sprigeo app would allow students to anonymously report offenses that would then be processed by “designated university officials and [be] appropriately and confidentially responded to in prompt fashion,” according to the resolution.

Following a lengthy debate, the Senate sent the resolution to External Affairs to be discussed further.

Before voting, some senators expressed disappointment with how the subject was approached.

Senator Alexandra Gessesse said that the Senate had last spoken to Bostick two weeks before, but that the updated resolution was “slapped on” the night before the meeting.

She added that the resolution should have been created in conjunction with current student efforts to combat sexual assault.

“The reason why I have a problem with [the resolution] is that no one is doing anything unless it makes them look real good, or they care about it and they’re caring about it when they’re not prioritizing other issues,” Gessesse said.

The amount of time allotted to work on the resolution was also a point of concern for some senators because of the sensitivity of the topic.

“This resolution shouldn’t be worked in a week. It should be worked in one month, two months, three months,” Senator Andrea Reyes said.

Another issue addressed was the use of the names of two UCSB alumni in the resolution.

The alumni mentioned have previously hosted sit-ins regarding sexual assault. The first was held by Alejandra Melgoza in May 2015 and lasted for 13 hours; the second was led by Ro’Shawndra Earvin in May 2017 and lasted for nine hours.

In both instances, Chancellor Henry T. Yang agreed to the students’ respective demands, although Earvin has continued fighting for the completion of the demands, most recently at a Feb. 8 Town Hall meeting.

Both Melgoza and Earvin said they were not contacted by the authors of the resolution or asked to have their names included.

“Using my name without consent is perpetuating the same acts of violence,” Melgoza said during public forum.

Armellini spoke about the intentions of the resolution, saying it came “prematurely” to the senate and that it “needs work”.

“In no way was this resolution supposed to produce this anxiety and uproar,” she said.

Currently, students can report incidents of sexual assault through the UCSB Police Department (UCPD) if the incident occurs on campus or through the Title IX & Sexual Harassment Policy Compliance Office. Local law enforcement like the Isla Vista Foot Patrol can address an incident if it occurred off campus.

Campus Advocacy Resources and Education (C.A.R.E.) is another campus resource students can use to anonymously report sexual assault. Students can go online to file a report, which will then be forwarded to UCPD and other campus offices.

Sounds like another redundant use of resources. I don’t want my student fees to be used for this. There are many existing ways to report sexual violence on campus or Isla Vista already so let’s not spend money on ways to make a few elected officials look and feel good.