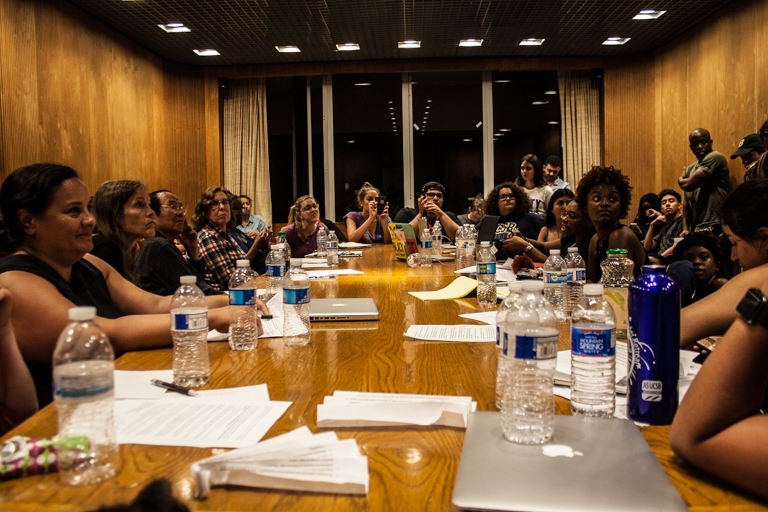 Students first presented the demands to Chancellor Henry T. Yang during a May 2017 sit-in. Yang agreed to the demands but students are still concerned that the university has not taken enough action to reform sexual assault policies. Jose Ochoa / Daily Nexus

Students at a town hall on Thursday continued to express their frustration with UC Santa Barbara administration, which they say has not fully addressed previously agreed-upon demands to reform sexual assault policies at UCSB.

The town hall, hosted by Student Activist Network, addressed one of the demands, which requires UC President Janet Napolitano to tour sexual assault and sexual violence town halls on UC campuses once a year.

Robin Holmes Sullivan, vice president for Student Affairs at the University of California Office of the President (UCOP), attended the town hall as a representative for Napolitano.

Students initially presented the demands to Chancellor Henry T. Yang during at a May 2017 sit- in. These demands elaborated on a previous list of 13 demands, which students presented to Yang at a May 2015 sit-in in Cheadle Hall. In both cases, Yang agreed to the students’ demands.

The panel was composed of UCSB administrators, Title IX Student Advisory Board representative Jennifer Selvidge and Ro’Shawndra Earvin, who led the initial sit-in when Chancellor Yang signed the 2017 list of demands.

Yang did not attend the meeting because he was in Sacramento advocating for UC funding, Vice Chancellor for Student Affairs Margaret Klawunn explained at the meeting.

Klawunn said Yang had made a personal commitment to Earvin prior to the town hall that he would raise money for the Survivor Fund at UCSB.

On Monday, Earvin posted on social media a screenshot of an email she had sent to Yang, in which she told the chancellor that he had been unresponsive to her emails.

“It worries me that you have not consistently followed up with the issues presented to you on that day,” she wrote. ”I am sure you understand that directing me to your assistants is insufficient, as your name is on the contract as well.”

Klawunn said all of the demands from 2015 had been addressed. Some of the demands from last May are still in progress, like a demand for a Survivor Resource Center and an Isla Vista report card for sexual assault incidents, she said. She suggested partnering with a family justice center to address the former demand.

But Selvidge disagreed with Klawunn and said three of the original 13 demands have still not been met. Selvidge, who told the Nexus she is a survivor of assault, read through the demands she considers incomplete.

One of the demands requires increasing female presence on the I.V. Foot Patrol (IVFP) and training all IVFP personnel to deal with sexual violence and harassment. Another states that there should be accountability and oversight of the Office of Judicial Affairs (OJA) for past mishandling of sexual assault cases.

Still another of these demands requires placing an additional Campus Advocacy, Resources and Education Office (C.A.R.E.) advocate in the Santa Catalina Residence Hall.

“I just need the university to run what they signed for,” Earvin said. “That’s the reason why I am here. Our agenda is ‘demand completion.’”

Earvin also expressed frustration that her name had been used without her permission in an Associated Students (A.S.) Senate resolution. The resolution proposed using a mobile application called Sprigeo to combat sexual assault and sexual violence.

Senators Kristen Armellini and Grecia Martinez authored the resolution, which was presented at the Feb. 7 Senate meeting.

“I have never felt so disrespected,” Earvin said. “Apparently you had a story when you created the app, why did you use my story?”

During the Feb. 7 meeting, UCSB alumna Alejandra Melgoza also expressed concern  because her name was mentioned in the resolution without her permission.

“Using my name without consent is perpetuating the same acts of violence,” Melgoza said.

Senators Alexandra Gessesse and Andrea Reyes said the authors of the resolution should have approached the individuals before including their names. Gessesse said that regardless of when the resolution was written, the fact that Earvin and Melgoza had not been contacted was “exploitation.”

Earvin emphasized that her main initiative since the May sit-in was to fulfill the list of demands, including full payment of her UC tuition.

“Run that tuition and run this resource center,” Earvin said.

Lmfao I like how 2 of the 13 resolutions are grimey cash grabs. Why should you get any free money? Deligitmizes the cause..

Do not ever trust Klawunn. There must be ways that you can learn about her work history before she came to UCSB.