Riparian forests are ecosystems that are rich in life and biodiversity, providing a critical habitat for a range of organisms spanning from understory and brush to amphibians and mammals. However, climate change threatens the functionality of these environments, as less rainfall and warming atmospheric conditions endanger the life of the trees and consequently, the numerous species that rely on them.

In order to analyze and impede the decline of these fundamental forests, a team of scientists from UCSB and the State University of New York is conducting a series of projects to study how riparian forests located in drought-prone environments are responding to climate change. With the support of $2.5 million in combined funding, three discrete grants are transpiring in hopes of monitoring these essential habitats and discovering relevant management solutions.

The three projects are focusing particularly on riparian forests in drought-prone environments because of the additional strains of heat and dryness in those areas. While local climatic factors act as a source of stress for many organisms, the riparian corridor — the ribbon of trees along the river channel — provides a shady, cool and water-filled place for many species to congregate, resulting in a type of oasis for a wide range of species.

One of the scientists collaborating on all three projects, Michael Singer from UCSB’s Earth Research Institute (ERI), highlights that these benefits to the broader ecosystem are only provided by the forests if the water in those areas is readily available and the trees remain healthy, factors which are typically influenced by climate change.

“With less rain falling and therefore less water being infiltrated into the soil, there is reduced water availability to the trees. Additionally, under warming atmospheric conditions, the water that arrives at the surface will evaporate at higher rates,” Singer said. “If the environment starts drying up or the water source to the particular tree species begins to disappear, then the trees start to suffer, dropping branches and leaves and ceasing photosynthesis.” 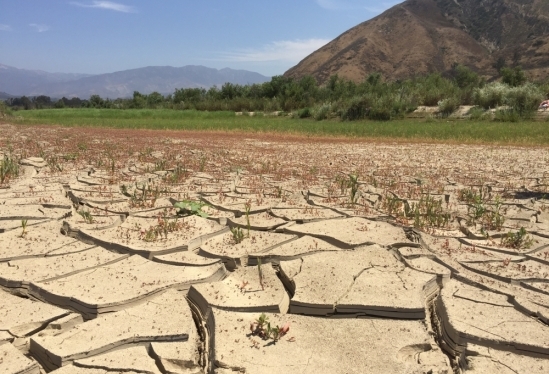 The Santa Clara basin, because it goes dry, relies largely on subsurface groundwater. Continual pumping of groundwater from the aquifer for agriculture, when that aquifer is not recharged by rainfall, causes wells to go dry and forces pumping efforts to reach deeper and deeper. / Courtesy of John Stella

The first of the three projects focuses on the Santa Clara River Valley, which is a multiple-use basin with conflicting interests between ecological, agricultural and urban uses. Funded by the National Science Foundation’s (NSF) Geography and Spatial Sciences Program, the grant concentrates on groundwater-dependent areas, where trees that are more deeply rooted rely on a deeper groundwater source.

Singer and his colleagues, UCSB geography professor Dar Roberts and associate professor from the State University of New York College of Environmental Science and Forestry, John Stella, are utilizing a variety of water stress indicators in order to determine how the trees are performing with respect to the water table elevations and trends through time.

These indicators include remote sensing metrics, which utilize space satellites to reveal greenness index changes, inventories of forest health via ground perspective, and isotope analysis, which involves extracting cellulose from each ring in a tree core to determine what water source was used by the tree in each year of growth. In combination, these water stress indicators will help the scientists establish groundwater depletion trends, which heavily influence the success of these riparian forests.

The second project, supported by the NSF Hydrologic Sciences Program, focuses on the Rhône River in southern France. This river extends through Europe and has a powerful climate gradient ranging from wet and cool to hot and dry. 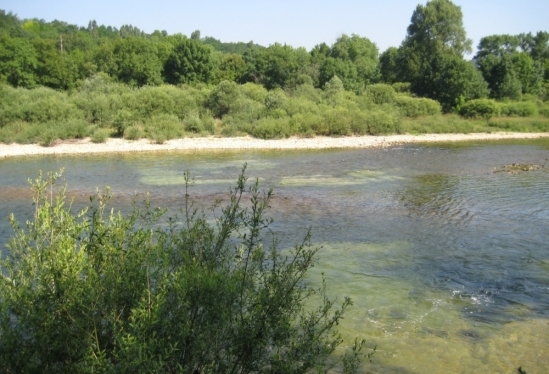 The Rhône River in southern France. /Courtesy of John Stella

Singer, Stella and ERI director and UCSB Bren School of Environmental Science & Management professor Kelly Caylor are utilizing isotope analysis to determine water use of two different species of trees in the riparian forest in France. Specifically, they are using carbon isotopes to reveal the health of the tree and sap-flux measurements to indicate tree water uptake. The project also involves mathematical modeling to project 50 years into the future and predict what might happen to the forests along the climate gradient.

The final project is funded by the Department of Defense (DoD) through the Strategic Environmental Research and Development Program and is focused on identifying various management solutions for riparian forest ecosystems in DoD areas.

“The DoD has bases located all over the U.S. and abroad, and those bases tend to be hotspots for biodiversity because most of the area is not being used for training and gunneries. It’s just wild land that acts like a buffer, and since that land is not under any development pressure, it has attracted a lot of endangered species,” Singer said. “Because of the Endangered Species Act, those species and their habitats need to be protected. So increasingly, the DoD is spending money on the conservation of these species, and our project is meant to try to come up with different management solutions that could minimize that expenditure.”

In this project, Singer, Roberts, Caylor and Stella are utilizing water stress indicators such as isotopic information from the tree rings, remote sensing and some numerical modeling of water fluxes and climate change to explore how to arrive at effective management solutions.

The primary goal of the cumulative projects is to understand the scientific systems underlying riparian forests and their response to climate change; however, the researchers would like to focus on the management context as well.

“All these projects were written with some sort of management involvement to help benefit the managing of water, resources and forests,” Singer said. “The core of it is science, but ultimately if we could provide some tools for management, then that’s a net benefit as well.”