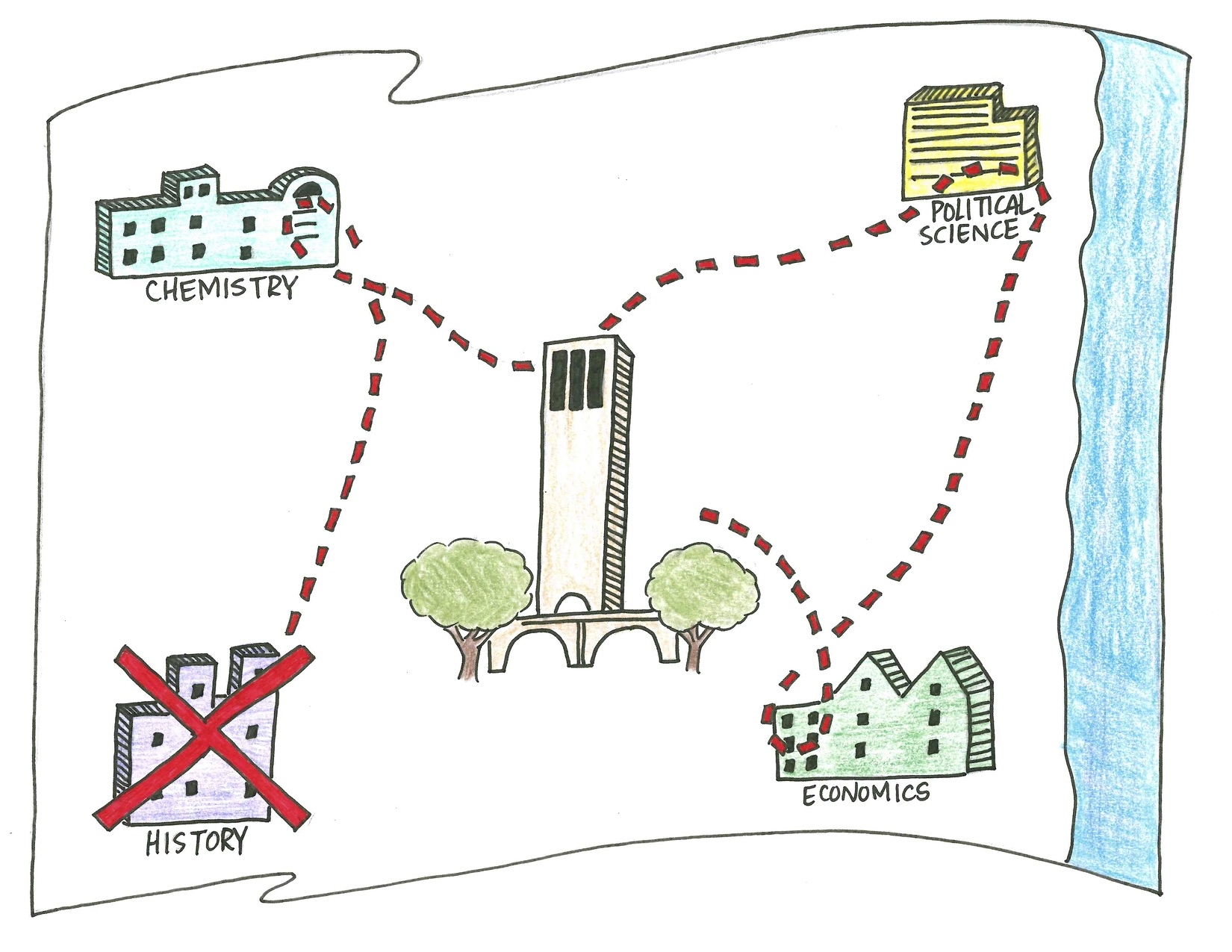 Every one of us remembers this moment: You were filling out your UC application in mid-November when you got to a page that had you scroll down a long list of majors with an open box waiting to be checked next to each one. Maybe you were one of those lucky few who knew exactly what they intended to study for the next four years. Maybe you checked that certain box, submitted your form and shook the hand of Chancellor Yang four years later as he handed you a diploma with that major written on it in crisp black script. If so, congratulations –– you’re a unicorn.

However, if you’re not one of these single-minded wunderkinds, you’re probably familiar with the frustration that accompanies major-related confusion. After all, the university is essentially asking seventeen-year-olds to decide the foundation that their lives will be built upon.

Sure, perhaps you really enjoyed your history class junior year. Does that mean you are ready to commit yourself to the academic rigor of pursuing a degree in history? The difference between high school classes and college classes is vast. It’s impossible to gauge what studying something in college will be like based on your high school experience.

What’s more, you shouldn’t have to. College is supposed to be a time of self-discovery, of finding out who you are and what you want to do in life. The implicit expectation that you should already know your passions is detrimental to the very core of that philosophy. By asking students to declare their major a year before they even matriculate, the university risks putting students in a box.

By categorizing students from the very beginning, colleges reinforce the idea that you have to have everything figured out at the ripe old age of seventeen.

After all, it’s not at all unusual for college students not to know what they want to do in their four years at UCSB, let alone in life. Even though applying undeclared is an option, there is immense pressure to come in completely dedicated to one major –– any major –– in order to feel like you’ve got it all together. It makes sense; the idea that you have your place in the world is comforting, but it can be dangerous.

This kind of insular mindset can result in a loss of opportunities you never thought to explore.  By categorizing students from the very beginning, colleges reinforce the idea that you have to have everything figured out at the ripe old age of seventeen. This inevitably encourages students not to delve into new and exciting things because it doesn’t advance you in your major.

For this reason, people view general education courses as laborious or just annoyances you slug through, complete and forget about. People dread GE courses, yet they are a fundamental part of the self-improvement that is key to a fulfilling college experience. The plethora of GE courses offered allows students to experiment with different fields of study while completing requirements. Who knows, the random GE course you take to fulfill Area Whatever could parlay itself into a passion that follows you throughout your whole life.

By entering college free of any self-imposed restrictions, you are in an advantageous position to grow, to change and to evolve. By not waiting, not exploring your options, you could be closing off a realm of possibilities to yourself or wasting time on academic ventures you will eventually abandon. So many students fail to embrace the adventurous side of their academic careers. The result is a system that is completely counterintuitive to the point of college: expanding yourself and expanding your horizons.

The motto of the University of California system is fiat lux, or “Let there be light.” By placing restrictions on students before their academic career even really begins, universities are setting them up for a life in the dark.

Even at freshman orientation, it is stated that most students won’t graduate in the major they applied into, which is usually met with awkward giggles and nervous glances. I myself will have been in three majors by the end of second quarter. It’s no secret that students change their majors at high rates, so why is there an expectation that you should know what you want to study when the reality is so different? College has so many more options than high school, so it doesn’t make sense to base your college life on the person you were at seventeen. You should not end your four years of college as the same person you were early in your senior year of high school.

I say embrace the exploration, take interesting classes and experience things you might’ve never imagined. Even though they say college is about the journey, not the destination, a fulfilling –– if convoluted –– journey will ultimately lead to a better destination.

Kate Adler believes it is unfair to ask students to pick a major upon entry that they probably won’t stick with.