The Daily Nexus
Sports
Gauchos Aim to Keep Momentum Ahead of 2-Game Road Trip
February 8, 2018 at 4:44 pm by Calvin Thrift 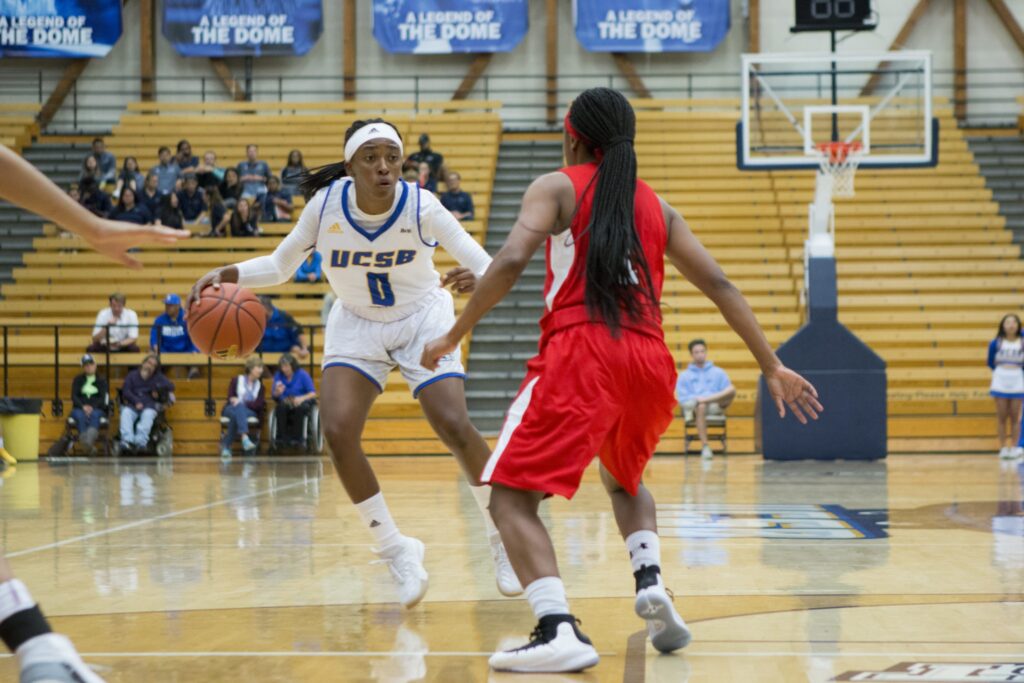 In the midst of conference play, the UCSB women’s basketball team will be on the road for its next two games in which it will face off against UC Riverside and Cal State Fullerton.

Saturday’s win over Hawaii snapped a two-game losing streak for the Gauchos, who sit at fifth place in the Big West standings at 5-4 and are 8-13 overall. Santa Barbara will face UC Riverside tonight and Cal State Fullerton on Saturday.

The Highlanders are sixth in the conference at 6-17 and 3-6 in Big West play. Meanwhile, the Titans sit right behind UCR at seventh with a 7-14, 2-6 Big West record.

Although the Gauchos have gone 2-4 since starting conference play 3-0, they understand that what’s in the win-loss column at the moment isn’t the end-all-be-all of their season.

During a stretch in November and December to start out their campaign, the Gauchos lost nine-straight games. However, they then went on to win five in a row.

UCSB has shown resilience and the ability to heat up, two very useful attributes as the second half of the season progresses. As per usual, Head Coach Bonnie Henrickson is focusing on what’s to come and how to improve.

In preparation for Thursday’s contest against Riverside, Henrickson stressed the unique nature of the Highlanders’ offense and how her team will defend it.

“Riverside is a lot of five-out motion, cuts, slips, curls, guards posting. It’s a lot of difference. It’s a very different style than anyone else in the league, so it’s been trying to get comfortable with how we’re going to play it,” Henrickson said. “We need to minimize the number of catches in those spots by their players because it’s their motion and movement but players have tendencies. It’s a little bit of recognizing who am I guarding and what does my guy like to do.”

Additionally, Riverside’s offense has taken its toll on teams this season through exploiting mismatches.

“They’re pretty balanced, so they bring some mismatch problems for us,” Henrickson said. “Their guards are going to post, which we don’t see a lot.”

Fortunately for Henrickson, the Gauchos have plenty of options at the guard position and can continue to lean on their freshman point guard Sarah Bates as senior guard Drea Toler works toward returning to 100 percent.

Bates leads Santa Barbara in scoring during conference play, averaging 14.6 points per game, but she’s not just finding the net. Also leading the Gauchos in the assist category, Bates has dished out an average of 3.1 dimes per game in conference matchups.

Looking closer at Riverside, the Highlanders have fallen in their last four games, so they’re likely eager to get back on track. UCSB’s last meeting with Riverside was in last season’s Big West Quarterfinals, where the Gauchos won 81-71 to advance.

Win or lose against Riverside, Santa Barbara will turn around to visit CSU Fullerton on Saturday.

Similar to Riverside, the Titans are in a rut of their own, having lost five in a row. Despite Fullerton’s recent struggles, Henrickson again understands that records aren’t everything.

“They’ve got good size inside,” Henrickson said. “Good shooters, good athletes. They’re much improved, playing with a lot of confidence. They’ve had big wins at home and been in one-possession games, so they’re much improved from last year.”

Last season, the Titans went 1-15 in conference play and a dismal 4-25 overall, losing both games in their series against the Gauchos.

With the potential to climb the rankings on the road, Santa Barbara is aiming to keep up its pace as well as defensive prowess.

“I think for us, how aggressive we were in transition, we scored 23 points in transition which is a season-high for us,” Henrickson said, “I thought we had tremendous energy [against Hawaii] where we were able to take away some of their go-to looks, which is what we want to do against Riverside.”

The Gauchos will take on UC Riverside tonight at SRC Arena at 7 p.m. UCSB and CSU Fullerton will play at 6 p.m. on Saturday, Feb. 10, in Titan Gym.