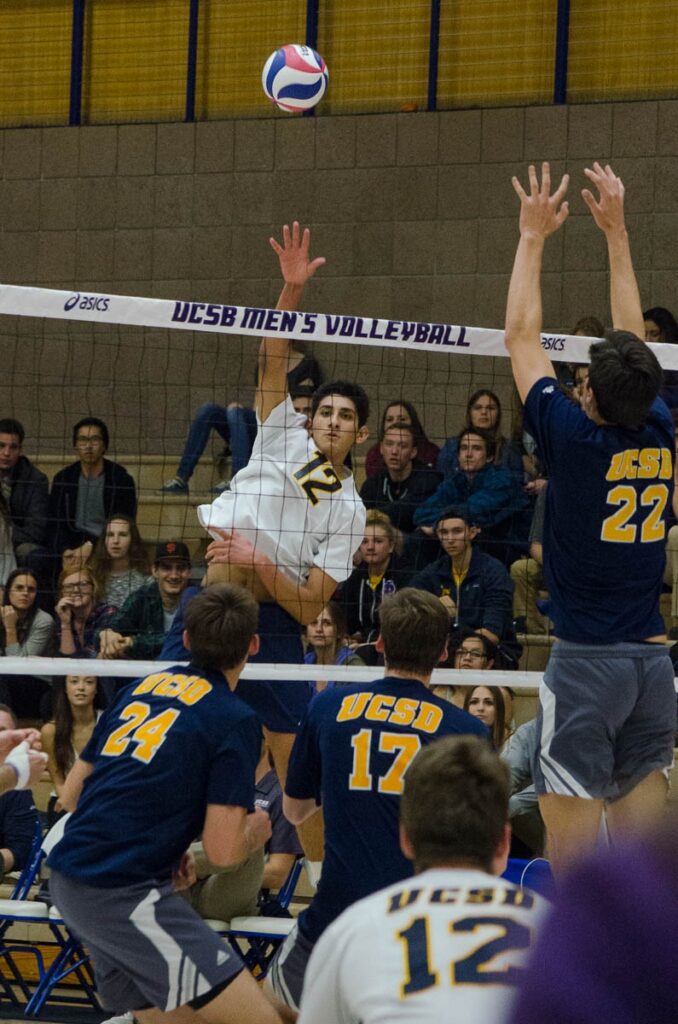 Corey Chavers spikes the ball to score for the Gauchos. Christina DeMarzo/Daily Nexus

It’s been a rollercoaster of emotions all weekend long for the UCSB men’s volleyball team as it was just recently on the road for two back-to-back matches against Brigham Young University.

UCSB split its pair of matches against the Cougars, leaving the Gauchos with a 4-4 record. It managed to pull off an impressive 3-0 shutout over BYU on Friday, but couldn’t sustain the momentum as it was shutout itself the following Saturday. BYU is now 6-4.

The first set of Friday’s first match was quite the offensive spectacle as both teams were making the most of almost every attacking opportunity. Although, the Gauchos were able to run away with it by a close 25-23 end result; with four kills each from UCSB’s sophomore middle blocker Keenan Sanders, sophomore outside hitter Roy McFarland, and junior outside hitter Corey Chavers.

In the second set, each sides’ defense started to tighten up and the improvements were shown as a total of 6 blocks, 3 apiece, were recorded. For the Gauchos, the standout performer in this one was sophomore setter Randy DeWeese who posted up two of those three blocks from his playmaker position. DeWeese would go on and also conclude the day with a game high of 4 total blocks to go along with his 31 team assists. UCSB would then go on to clinch this second set by a score of 25-20.

By this point the BYU Cougars were on the ropes and left their best for last in an attempt to cancel out the away side’s clean sweep. Nearing the end of the third set, the Gauchos were down by only a pair of scores as the board read 21-23. Then, thanks to a flurry of attack errors and a service mistake is what ultimately decided the game as the Gauchos would then go on and set up the final 27-25 score to earn both the road victory and clean 3-0 set sweep over the No. 6 BYU.

As for Saturday’s game two, which took place the next evening, UCSB was in search of pulling off a sweep over their opponents whilst still in enemy territory. Set No. 1 seemed to go in favor of the Gauchos for most of the way, yet failure to halt BYU’s .600 hitting percentage in the first set eventually gave the Cougars the early 1-0 lead to start the match.

Set two experienced a complete advantage for BYU as their freshman opposite hitter Gabi Garcia Fernandez put up 6 total kills. This one got out of the Gauchos reach early on as the Cougars never gave up the lead through it all and secured the 25-20 victory.

Then for the final set, the Gauchos gave it their all but an outstanding defensive performance from the other side of the court held them to a .138 hitting percentage and a doubled amount of blocks to go with. Disappointingly, UCSB then lost the day by a final result of 0-3 as back to back sweeps were experienced on both ends in just a matter of two days. Aggregate team stats show the Gauchos hitting for a cumulative .263 hitting percentage, 11.5 blocks, and 6 aces; compared to the Cougars’ .337 hitting percentage average, 16.5 blocks, and 6 aces as well.

The UCSB men’s volleyball program will continue its 2018 regular season on Wednesday, Feb. 21, with a home game against Pepperdine just before the first conference matchup of the year.