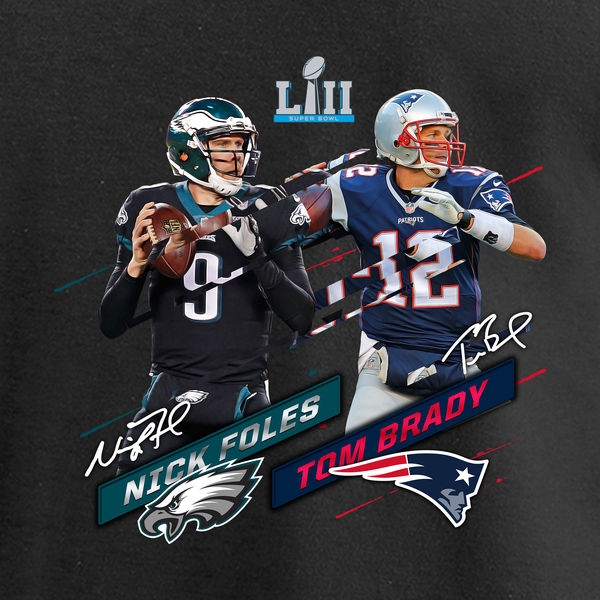 Not much more can be said about Tom Brady, the New England Patriots’ legendary star quarterback.

Boasting perhaps the most accomplished repertoire in both current day and league history, Brady has genuinely earned the ‘greatest of all time’ moniker that some fans and players alike have attributed to him.

To help bolster this claim, one need not look any further than that once in a lifetime comeback versus the Atlanta Falcons in Super Bowl LI.

As for the Philadelphia Eagles, it’s been a season of both success and struggle.
Losing their franchise quarterback, Carson Wentz, due to an ACL injury during their Week 14 matchup against the Los Angeles Rams, the Eagles looked to Nick Foles to save the day and their season.

That game eventually resulted in a clutch last-minute win for Foles and was enough for Philadelphia to claim the NFC East title and spark the start of this team’s underdog tale.
Following both teams’ impressive semifinal wins in their respective Conference Championship games, the Patriots and Eagles will now meet this Sunday in Minnesota for Super Bowl LII.

In terms of quarterback comparisons, the advantage seems clear-cut in favor of the Brady bunch and his expertise of seven total finals appearances.
With a historically best playoff passer rating of 116.4, however, Foles just might carry the Eagles’ offense past all odds.

At 352 yards for three touchdowns and no interceptions, Foles demolished the Vikings’ league-best defense and has proven just why the Eagles invested such hefty capital in perhaps now the league’s best backup quarterback.

Considering he’s coming off perhaps the most important game of his career, Philadelphia’s prodigal son returned home just in time to make the Super Bowl dream a reality.

Speaking of the best backup quarterbacks, Brady shares this similarity with Foles because his, and the Patriots’, first Super Bowl win came during the very same season he took over the starting role when Drew Bledsoe’s year ended back in Week 2 of 2001.

As for this postseason, Brady’s previous matchup against the Jaguars ended in yet another spectacular win from behind as the Patriots faced a 14-3 deficit during the second quarter of play.

Knowing that the Jaguars boasted a top-three defense, Brady wasn’t stopped from doing what’s now expected of him and coming in clutch with the 290 yard and two touchdown stat-line in order to win the game.

“He knows what to do…He’s a great player, and the team has a ton of confidence in him…I know he’ll do a great job,” Brady said during the Super Bowl’s media opening night when asked about how he believes Foles will handle his first championship appearance.

It’s certain both quarterbacks will be doing plenty of research on how to get the job done come game time, yet it’s interesting to see just how their performances will stack up against each other and prove exactly why they both belong in this upcoming and obviously must-win game.

Now on football’s biggest stage, both teams will go head to head as each wish to make their mark on the history books.

Foles, wanting to hand the city of Philadelphia their first Super Bowl victory in franchise history, and Brady, looking for his sixth career Super Bowl ring: It’s going to be quite the David versus Goliath storyline as kickoff time approaches.