The Daily Nexus
News
Student Fees May Spike With UCen Remodel
February 1, 2018 at 12:14 am by Evelyn Spence and Tamari Dzotsenidze

Associated Students President Hieu Le proposed a plan to complete an expansion project of A.S. and the University Center, according to a resolution that was tabled indefinitely on Wednesday, Jan. 31. 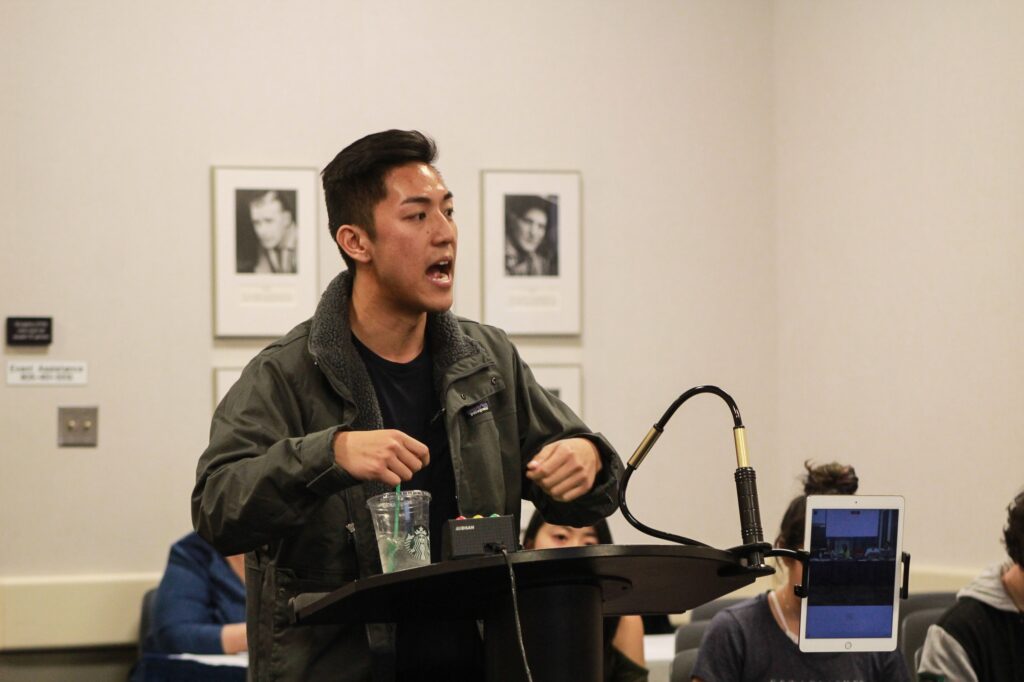 A.S. President Hieu Le proposed a plan to renovate the UCen building, which could increase student fees by $20 per student per quarter. Kaitlyn Nguyen / Daily Nexus

The UCen/Student Union Renovation and Expansion project goal is to “address critical building infrastructure needs of the UCen,” according to the first draft of the resolution submitted to Senate.

The first draft of the resolution was tabled indefinitely, and a new one was passed at the Jan. 31 Senate meeting, reaffirming support for Le’s plan.

“I have high hopes for it, and I want other students to believe in it,” Martinez said of Le’s plan.

“That’s a 48 million dollar project, as I mentioned, and I think it’s a lot to ask from students to pay for the majority of that cost,” Ferraro said. “A lot of students have a very tough financial burden, and every dollar really counts for them.”

Le declined the Nexus’ request for comment, but spoke to the Senate later and confirmed the potential costs of the new project for students.

He said the project has a $48 million budget which would be funded through a combination of student fees and fundraising, and that the fees would range from $21 to $99 per quarter. The project, however, is still in its preliminary stages; Le will need to collect signatures to get the measure on the ballot for the 2018 A.S. elections.

He said the plan would include an approximately $50 million return for students with financial aid to supplement the fee for students who could not otherwise afford it.

Ferraro explained that the current proposal doesn’t include any financial commitment from the university aside from setting up a fundraiser that would solicit funds from alumni donors.

“I think a lot of you really opposed when the UC Regents or when [the] university is really trying to raise our fees and you guys really fight and you’re great leaders on that,” Ferraro said to the senators.

“But I think when it comes to this and when it comes to internal funding, I think you really have to be careful and really pay attention to what they’re asking for, especially Office of the President,” he added.

The original resolution references a 2012 space survey which states that “38% of A.S. entities has no assigned space, while a quarter of A.S. entities used temporary or shared spaces. A.S. is located in seven different buildings on campus making it difficult for students to collaborate and integrate their ideas, projects, and communications.”

The resolution proposed the expansion and renovation of the UCen because it is nearly $2 million in debt and the majority of the businesses are not successful. It also states that the interior and exterior need to be remodeled for general aesthetics “in order to have a comparative advantage over other elite universities.”

The resolution also references the UCSB Long Range Development Plan 2025, which calls for an annual one percent growth of students until UCSB reaches a capacity of 25,000 students.

Le created a task force to revisit the Student Union Revitalization Fund (S.U.R.F.), which had been originally created by previous A.S. president Jonathan Abboud in 2013, according to the resolution.

Le’s task force would assess the “internal needs” of A.S. and update the S.U.R.F. proposal. The updated plan provides 40 percent more program area than the previous concept and “[addresses] critical building infrastructure needs of the UCen.”

The original resolution states that Senate stands in “full support” of Le’s project and described the project as “well-needed” and “long-overdue.”

A version of this story appeared on pg. 1 of the Feb. 1 issue of the Daily Nexus.

The UCen is fine the way it is

What an incredible waste of money.

Why is AS trying to force this failed plan on us again lol. No one cares that you don’t have enough rooms to conduct your empty, action-less meetings. Piss off

AS already got their own building—whoever built that should have thought things through.

Isn’t the AS president a 4th year graduating soon? It’s a lot easier to increase fees when you don’t have to worry about paying for them. Also AS asking for more space sounds a lot like republicans asking for more tax cuts, only benefitting themselves.

Answer me why out tuition goes up, our fees, go up, and the university needs to provide for its students or as mentioned, look better to attract new students, we end up with the bill? It sounds like the president is just trying to leave his mark at the expense of students.

What a dick move, the Ucen is fine the way it is. If businesses are failing there it’s because students are trying to budget their student loans as it is. We shouldn’t keep making the younger generation pay that’s just trickle down economics.