In a three-by-three inch maze containing milk and a pool of red dye, drops of liquid soap are added, propelling the dye forward. The dye doesn’t just spread out to every corridor, but instead travels knowingly, continuously moving and taking sharp turns until it reaches the end of the maze. It has correctly solved it.

So what’s the explanation behind this phenomenon?

It involves the Marangoni effect, which occurs when a gradient of surface tension exists at an interface between two states of matter, such as two liquids. Another instance in which you might observe the Marangoni effect is tears running down the walls of a glass of wine after you swirl it.

Surface tension refers to the property created by bonds among molecules of liquid, allowing the liquid to resist an external force. Higher surface tension means the bonds are stronger and the liquid is more resistant. It’s how insects can walk on water, and it’s what gives water droplets their round shape.

The soap is a surfactant, or a substance that lowers local surface tension when it’s between two fluids. By targeting areas of higher surface tension ahead of its path in the maze, the soap (and dye) move forward and create a Marangoni force. 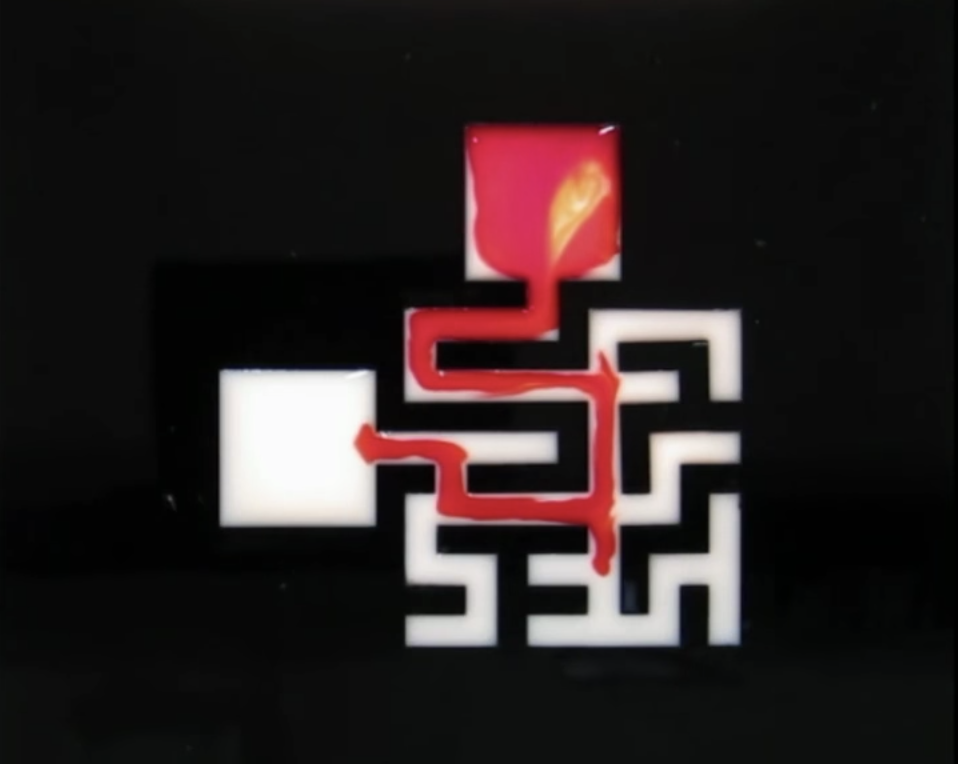 The maze experiment is a joint project between UCSB researchers and Julien Landel and Oliver Jensen at the University of Manchester, as well as François Peaudecerf at ETH Zurich. / Courtesy of Fernando Temprano-Coleto

“The intermolecular forces of substances matter when you have an interface between two fluids because when you add soap, the attractive forces between two molecules of soap are locally weaker and the attractive forces between molecules of water on the other side are stronger,” Fernando Temprano-Coleto, a UC Santa Barbara graduate student and one of the researchers who worked on the project, said.

“The surface tension decreases around the area where you put the drop [of soap], and the imbalance in the average strength of intermolecular forces between two substances causes the soap to expand, inducing force and, therefore, motion.”

While the milk was used mainly for color contrast in demonstrating the Marangoni effect, it helped in other ways as well.

“We found out milk has some nice properties, likely chemical ones, that allow the Marangoni effect to be sustained for longer amounts of time because it is an extremely complex substance. It’s a colloid that never settles and it’s not such a pure liquid as water,” Temprano-Coleto said.

However, he points out that the Marangoni effect demonstrated in the maze is not limited to just milk, as tests with water have shown it works all the same.
As for how the soap appears to know which directions to take to solve the maze, Temprano-Coleto says the results tested the researchers’ hypothesis of how the soap interacts with pre-existing surfactants in the fluid.

When the soap tries to advance in a channel in the maze, it compresses the channel as it pushes the endogenous surfactants ahead of its path. This increases the soap’s concentration as the surface area decreases, and creates a counter-Marangoni effect resistant to the soap’s front.

“Therefore, the path with the largest surface area is the path that allows the front to push most without compacting the surfactants that are already there. That’s why [the soap] chooses that path, because it’s the path of least resistance,” Temprano-Coleto said.

The project resulted in Temprano-Coleto, his co-advisors, UCSB mechanical engineering professors Frederic Gibou and Paolo Luzzatto-Fegiz as well as François Peaudecerf from the University of Cambridge and Julien Landel from the University of Manchester, winning an award from the American Physical Society’s (APS) Gallery of Fluid Motion after they submitted a video of their project.

“We wanted to show that geometry matters in Marangoni flows and that trace amounts of surfactants matter in these kinds of flows — not only in mazes like this, but in drag reactions, in superhydrophobic surfaces and so on,” Temprano-Coleto said. “It was a fun thing we came up with to prove our points, and it turned out to be great. We were able to win an award from the APS, and we’re pretty happy about it.”