The UCSB women’s tennis team split their matches for the second consecutive weekend in the 2018 ITA Kick-off Weekend tournament against the No. 17 University of Miami and Tulane University.

Coming off a decisive victory over USC last weekend, the 2-2 Gauchos faced off against Miami in the first round of the tournament, and were quickly defeated 4-0, leaving one doubles game and three singles games unfinished.

Miami dominated throughout the afternoon, relying on its nationally recognized players, No. 36 sophomore Estela Perez-Somarriba and No. 41 senior Sinead Lohan, to bring home victories in both singles and doubles play.

The pair combined for three wins against the Gauchos, securing two doubles victories, and one singles victory. 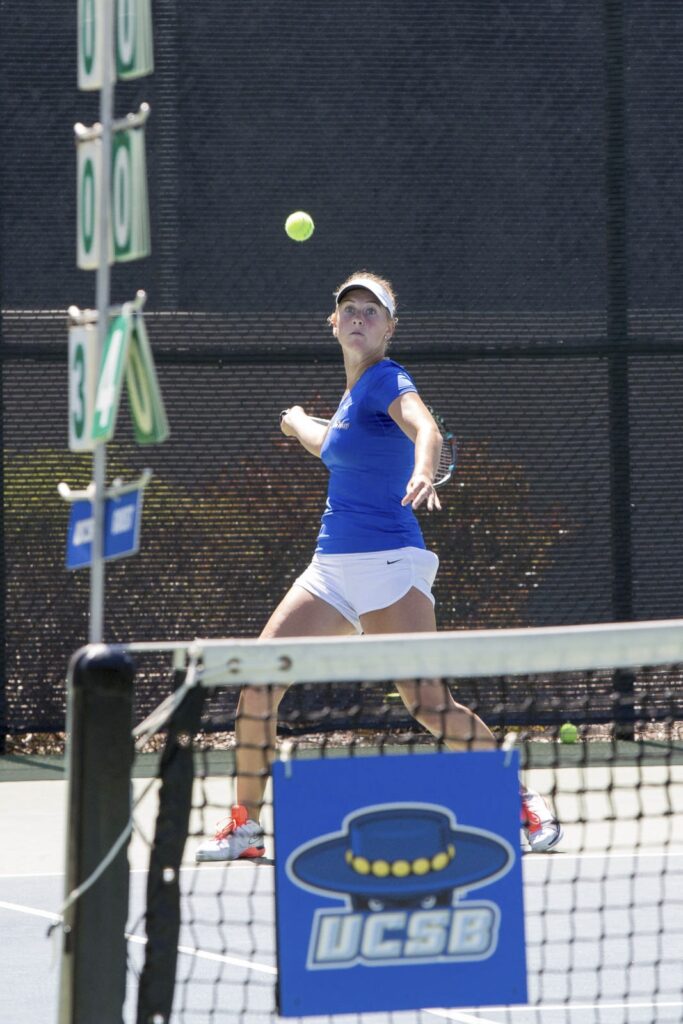 Senior Natalie Da Silveira and Lohan traded blows during their singles match, with Da Silveira claiming an early set victory and then relinquishing the second set to Lohan. The game would ultimately go unfinished due to a Hurricane match victory.

Perez-Somarriba’s match against UCSB senior Palina Duvabets was not so close. Duvabets struggled against the Hurricanes’ talented No. 1, losing both sets 6-1.

While the match ended in a shutout, the Gauchos put up more of a fight than the final score might have indicated. Junior Stephanie Yamada, came the closest to securing a Gaucho victory, tying the Hurricanes’ sophomore Dominika Paterova and junior Daniella Roldan 5-5 in an unfinished doubles game, alongside her teammate, senior Amanda Atanasson.

Yamada, who was named Big West Women’s Tennis Athlete of the Week last week, was equally competitive in the first set of her singles match against the Hurricane’s freshman Ulyana Shirokova. Despite a close first set, Yamada fell short in both sets against Shirokova, who handed Yamada her first official loss of the season, putting her at 5-1.

Despite glimpses of balance between the two teams, the Hurricanes defeated the Gauchos handily and advanced to the final round of the tournament to face No. 16 Auburn University. The Hurricanes were subsequently defeated by the Tigers 2-4, leaving Miami 1-1 on the season and Auburn with an undefeated 5-0 record.

Following their shutout on Saturday, the Gauchos bounced back against Tulane University on Sunday in the consolation round of the ITA Kick-off tournament. The Gauchos routed the Green Wave without much trouble, finishing the match with a score of 4-0.

The Gauchos’ surge was led by their star seniors, Duvabets and Da Silveira, who combined for three wins and no losses against Tulane. The pair secured the first doubles victory of the day for their team, and Duvabets appeared to be unstoppable in her singles match against senior Sade Atkinson, winning both sets 6-1.

After a rocky start against their first three opponents, UCSB freshmen Elizaveta Volodko and Lise Sentenac finally found their groove on Sunday against the Green Wave. Volodko earned her second singles win of the season against junior Elena Muller, and Sentenac was poised to win her first singles game of the season against freshman Daniela La Fuente until the game was ruled unfinished due to a match victory for the Gauchos.

The pair also came close to securing their first doubles victory of the season, but it too was ruled unfinished after the Gauchos secured the doubles point.

By routing the Green Wave in the consolation round, the Gauchos secured third place in the tournament behind two very talented and highly ranked teams. Both Tulane and UCSB finished the weekend with season records of 2-2.

The unranked Gauchos have managed to compile an impressive season record considering the high concentration of ranked opponents that they have faced so far. Next weekend is not shaping up to be any easier, as the Gauchos will travel to Malibu on Friday to face No. 6 Pepperdine University, and then return home for a doubleheader on Saturday against USF and Kansas State.

While the Gauchos may not fill out the win column early in the season, their rigorous schedule will certainly leave them well prepared to face rivals in the Big West.

UCSB’s next match will be Friday, February 2nd at Pepperdine.