The Daily Nexus
Sports
Gauchos Struggle to Knock Off Unbeaten UC Davis on the Road
January 29, 2018 at 6:11 pm by Kendra Jackson 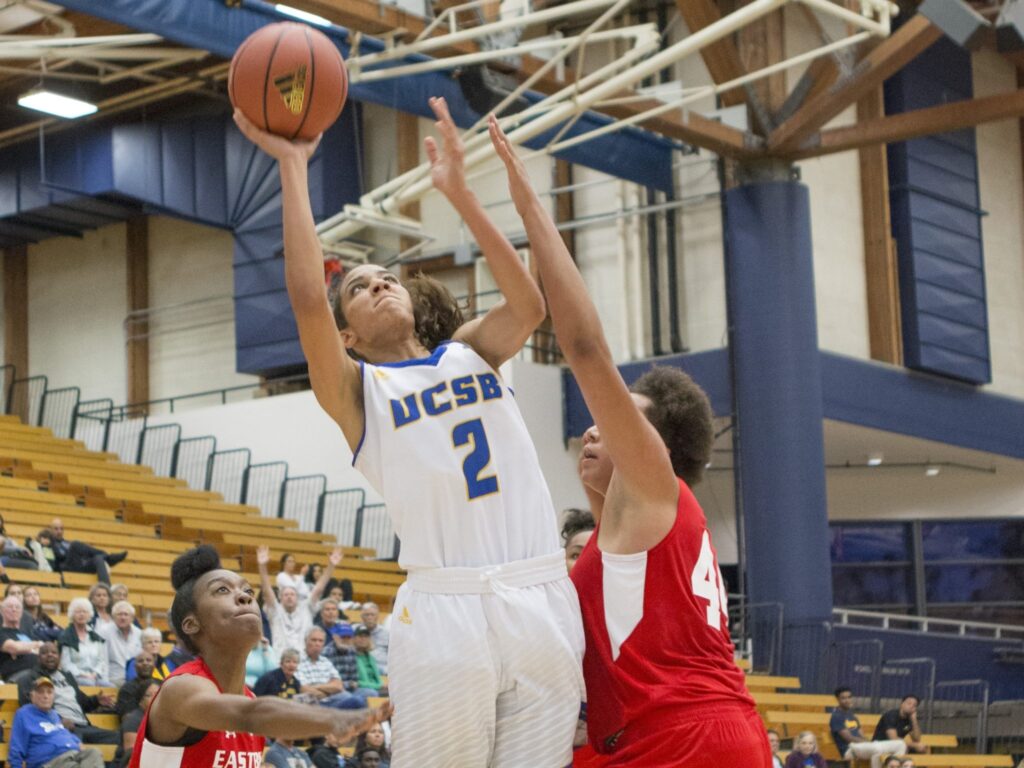 The UCSB women’s basketball team went head-to-head with UC Davis for the second time in just over a week, with the first meeting resulting in a loss for the home team, UCSB.

The story was repeated once again, with the Gauchos being the visitors this time, dropping the game to the UC Davis Aggies, 69-63.

This loss puts Santa Barbara at 4-3 in conference play, 7-12 overall and it is now all tied up with Cal State Northridge in the Big West, with both teams currently sitting at the fourth seed.

The victory leaves the Aggies at a commanding position atop the Big West thus far this season with a 17-3 overall mark and a 7-0 in conference play.

The game was what seemed like an even matchup, both teams having a pretty even exchange of buckets in the first through third quarters.

With both teams keeping on pace with each other, the intensity was rising, but both teams were up for the challenge.

The visiting Santa Barbara team seemed confident and was hoping to outlast the Aggies this time, unlike in their former matchup where they dropped the game 68-61.

Looking back to when the Gauchos hosted UC Davis on January 18, the Gauchos fell to their opponents due to an explosive fourth period by the home team. History seemed to repeat itself, as that was again the same story.

The third quarter was heated, with both teams going blow for blow. In a quarter that was a fast-paced battle consisting of back-and-forth basketball, neither team led by more than four points.

Looking at the scoreboard, it was 45-44 after the third – UCSB clinging on to their one-point advantage going into the last quarter of regulation.

The visitors opened their last quarter with a subpar performance, scoring just three points over the first seven minutes. During that same time, UC Davis outscored their opponents 15-3.

The Gauchos attempted to stomp their way back into the game to get the win, but ultimately their attempt was futile. The Aggies outscored UCSB 25-18 in the last quarter of regulation, solidifying their second win against Santa Barbara in just a few days.

UCSB Freshman guard Sarah Bates had a monster game, leading all scorers with 25 points – equaling her career-high. Bates was on fire from long range, draining seven of twelve from downtown.

The only other players scoring double digits for the visiting Gauchos were redshirt senior forward Drew Edelman who scored 13 points, and senior guard Makala Roper who notched 12 points of her own.

Edelman had her fifth double-double of the season, seasoning 10 rebounds to go along with her 13 points. And Roper’s 12 points were scored as she came off the bench, and she impressively went four of five from beyond the arc.

The Gauchos who scored in double digits were seemingly the only gleaming spot for the visiting team, as the rest of the team went only went 4 for 27 from the field. The Aggies had four of their starters contribute double digits in the matchup, with redshirt junior forward Morgan Bertsch leading her team, scoring 16 points.

Senior combo guard/forward Dani Nafekh came through in the clutch and made her presence known for the home team in the fourth quarter, splashing eight of her ten points in the final quarter.

Nafekh drained two three-pointers in a crucial time of the game and gave the Aggies a five-point lead, getting them out of their late two-point deficit.

The Gauchos face another important battle, as they are set to go face-to-face with the Cal State Northridge Matadors at home in the Thunderdome on Wednesday, January 31, at 7:00 pm.