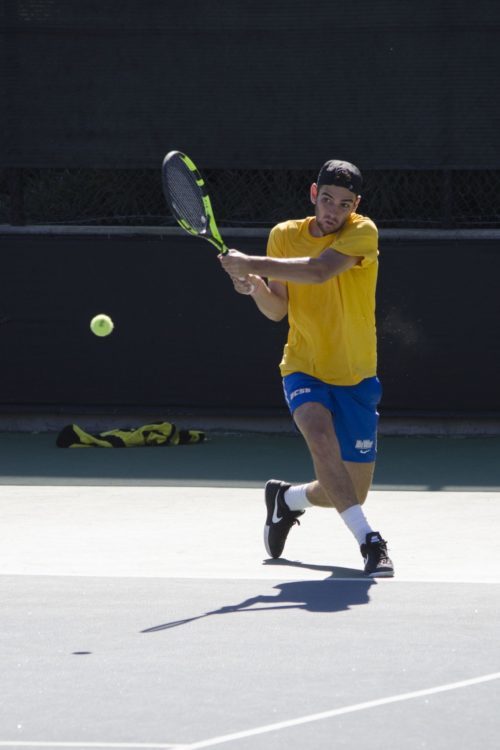 After pushing back the start of the season two weeks due to curriculum changes, wildfires and mudslides, the UCSB men’s tennis team will finally open its season this Friday in Southern California against SMU as part of the 2018 ITA Kickoff Weekend.

The Gauchos, who will look to win their fourth consecutive Big West title this season, will be aided by the return of four of their top six singles players from last season, including junior Nicolas Moreno de Alboran and senior leader Simon Freund.

Last season, Moreno de Alboran finished with a singles record of 19-12 and also posted an 6-5 record in the No. 1 spot for the Gauchos, a spot he will most likely start in this entire year. He also played alongside junior Anders Holm in doubles play as the duo finished the season with a 15-6 mark.

Due to his wonderful play, Moreno de Alboran received All-Big West honors in both singles and doubles play last season. Following a very successful fall season, including becoming the first Gaucho to receive an invitational to the ITA Fall National Championships, Moreno de Alboran is ranked No. 42 in the ITA top 150 singles players in the country.

Masciorini finished last season with a 17-12 record, and is yet another reliable starter for the Gauchos despite some spotty play during the fall season.

SMU enters the match looking to end their two-game losing skid as it currently sits at 1-2 to begin the season. They beat Abilene Christian 4-0 in their first match before losing to Harvard in heartbreaking fashion, 4-3. In their latest match, SMU got handled by No. 8 Texas, 4-0.

The Mustangs finished last season ranked No. 38 in the nation but are a relatively young team this year, featuring seven newcomers. In addition, SMU lost their top three players from last season — Ronald Slobodchikov, Hunter Johnson and Yates Johnson — to graduation.

They will need their returning standouts such as senior Charles Nettlefold and redshirt freshman Gardiner Perotti to step up in order to compete with the Gauchos. The last time the two teams played, back in 2015, SMU defeated UCSB 6-1.

With a win, Santa Barbara will then take on the winner of the match between USC or Indiana, also being played on Saturday. If the Gauchos can take down SMU, they will likely face USC, who currently resides as the No. 5 team in the nation and is a favorite to beat unranked Indiana.

The Trojans have three players currently ranked in the top 100, including Brandon Holt (11), Logan Smith (54), and Thibault Forget (96). Holt actually defeated Freund earlier this season at the Southern California Intercollegiate in two sets, and USC would present a stark early-season challenge for UCSB should they face them. The Trojans finished last season 27-6, including a 16-0 home record.

Indiana routed Ball State and Eastern Illinois in their first two matches, before losing to Memphis 5-2. The Hoosiers went 13-13 last year, but also acquired most of their losses in the highly competitive Big Ten.

Indiana is led by Senior Raheel Manji, who was ranked 125th in the country in the latest ITA singles rankings. Either way, Santa Barbara will look to acquire a signature early season win in their second match of the season.

UCSB will begin its season at 2 p.m. on Friday, Jan. 26, against SMU at Marks Tennis Stadium at USC. The Gauchos will play either USC or Indiana the following day with the time to be determined.