While UCSB and Isla Vista did not receive evacuation orders, several locations on campus and in I.V. closed, Chancellor Henry T. Yang cancelled the last two classes of Fall Quarter, and the university postponed finals due to frequent power outages and poor air quality.

The graph depicts the daily measurements for particulate matter (PM) 2.5 readings at the APCD’s Goleta monitoring station from the month of December in 2014, 2015, 2016 and 2017. Data is given in micrograms per cubic meter (µg/m³).

Particulate matter, also called particle pollution, is “the term for a mixture of solid particles and liquid droplets found in the air,” according to the U.S. Environmental Protection Agency (EPA), and can vary greatly in shape, size and chemical composition.

There are two different types of particulate matter: PM 10 and PM 2.5, which are determined based on their size.

“The invisible fine particles (known as PM 2.5) in wildfire smoke can lodge deep into the lungs and cause serious health effects,” said Lyz Hoffman, the public information officer for the APCD, in an email.

Hoffman said that the larger, visible particles are less of a threat to our heart and lungs than PM 2.5.

She noted that particulate matter can “cause serious health effects,” including aggravated asthma, nose and throat irritation, bronchitis and lung damage.

“These fine particles may even get into your bloodstream and affect your heart,” she added in the email, encouraging people with continued symptoms from smoke exposure to talk to their doctors. 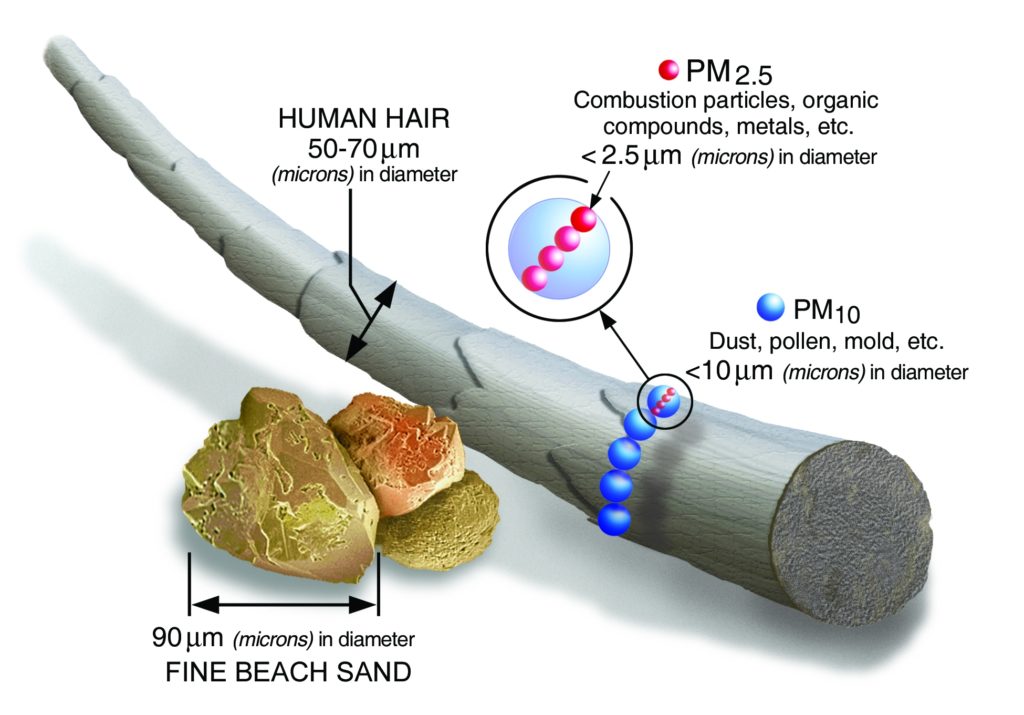 Image courtesy of the EPA

Hoffman said data was not collected on Dec. 1 through 3 because the PM 2.5 monitor required a maintenance test during that time.

There was a large spike in the daily averages after Dec. 4, the day the Thomas Fire began. These averages reached their peak on Dec. 7 at 130 µg/m³. This is over 14 times greater than the value observed on Dec. 7, 2016.

The averages returned to levels similar to previous years on Dec. 20, when the fire’s containment reached 60 percent.

The highest hourly reading of PM 2.5, 228 µg/m³, was observed on Dec. 7 at 1 a.m. The hourly readings, however, can fluctuate, which Hoffman said is because air consists of different particles, and particulate matter concentrations change as the air moves.

Here’s what these measures look like on the Air Quality Index (AQI), a measure of air quality the EPA uses to show air pollution in an area and inform viewers of the health concerns associated with the readings.

Data courtesy of the EPA. Phi Do / Daily Nexus

Graph B depicts AQI data collected from the EPA’s AIRNow website from Dec. 4 to Dec. 31, not including Dec. 12. Hoffman said that gaps can occur in the hourly readings for reasons including maintenance, internet connection and power outages.

According to the EPA, the AQI of particulate matter is measured on a scale from 0 to 500. The EPA sets the national air quality standard as 100; AQI readings below 100 are seen as satisfactory, while higher values correspond to greater levels of air pollution and health concerns.

When the readings exceed 35 µg/m³, they correlate to a value over 100 on the AQI, which poses greater health risks.

Hoffman said the particulate matter in Goleta on Dec. 7 was the station’s largest measurement since it started sampling for them in 2010. Air quality in Goleta on Dec. 7 registered as a 193 on the AQI (Graph B), a reading the EPA classifies as “unhealthy.”
According to the EPA, people “may begin to experience some adverse health effects, and members of the sensitive groups may experience more serious effects” with such high readings.

Table A breaks down the different levels of AQI and explains what that means for residents in the area.

Data courtesy of the EPA. Phi Do / Daily Nexus

Data from the EPA shows that eight days of Dec. 2017 in Goleta had “unhealthy” levels of PM 2.5, five days had “moderate” levels and 12 days had “good” levels. Four days did not have a value, as shown on Graph B.

Hourly readings, however, extended into “hazardous” territory, according to data from the ACPD.

The Santa Barbara County Public Health Department and the APCD issued an Air Quality Warning on Dec. 5, which they lowered to an Air Quality Watch on Dec. 22 and then cancelled on Dec. 29, when the fire was at 92 percent containment.

The impacts from the Thomas Fire — as well as the fatal mudslides in Montecito that closed Highway 101 and killed over 20 people — continue to affect the community. Since the peak of the fire, however, air quality in Goleta has returned to “good-to-moderate” levels, according to the ACPD.

Community members can continue checking air quality measures in Goleta on the EPA website and the Santa Barbara ACPD website.

If you’re interested viewing the data we used to report this story, you can download Excel files of PM 2.5 µg/m³ readings here and PM 2.5 AQI readings here.

Thanks for sharing the raw data!
Great article! <3