The Daily Nexus
Sports
Gauchos Tally Back-to-Back Wins for First Time This Season
December 31, 2017 at 12:37 am by Kendra Jackson 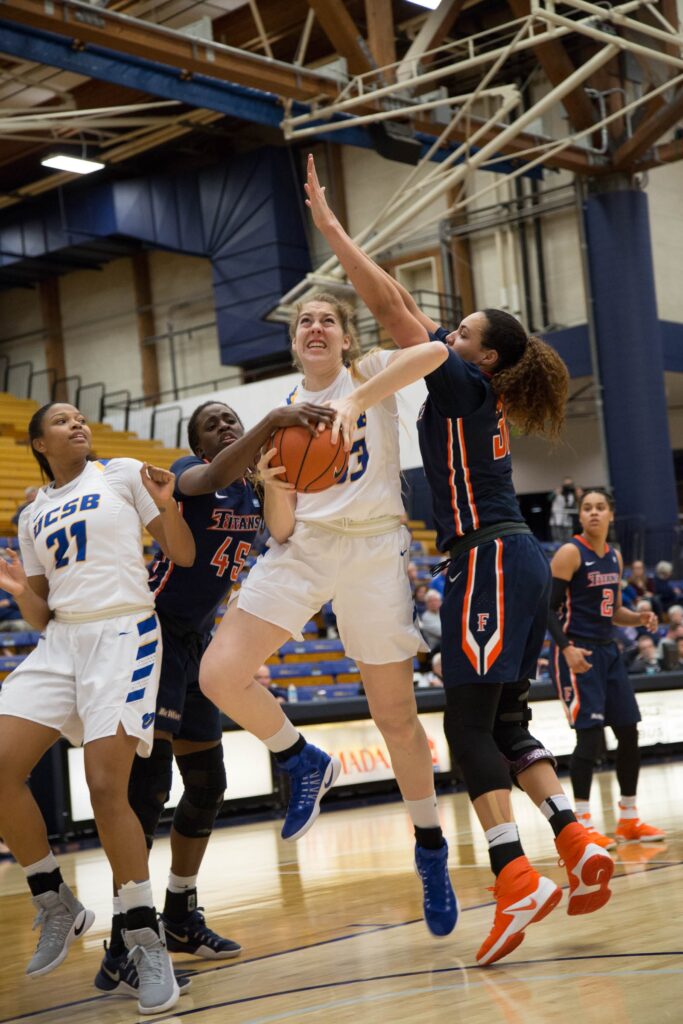 Coming off a win against San Diego State, UCSB women’s basketball earned consecutive wins for the first time this season following a win over the New Mexico State Aggies on Friday.

Santa Barbara completed a well-rounded game to obtain a convincing 77-47 road victory in its last non-conference game of the season. The outcome of the game puts Santa Barbara at a 3-9 record before proceeding into Big West conference play, while the Aggies sit at 5-8.

UCSB’s woes have been no secret, but things have recently turned around, and the home team arrived in New Mexico with a new-found confidence.

The visitors exploited the subpar offense showcased by the Aggies, and rode the wave of a three-point potent attack.

New Mexico got burned as the Gauchos exploded for 14 baskets from beyond the arc, tying their season high for three-point shots made on the season.

The matchup was all Santa Barbara, as its offense wouldn’t let up and erupted for 50 points in the first half.

Despite falling behind 7-0 early, the Aggies remained persistent as they attempted to erase the deficit. At the start of the second quarter, the home team went bucket-for-bucket with their opponents, but eventually fell short as UCSB went on a striking 6-0 run to put New Mexico State down 19 points with the score being 35-16, Santa Barbara.

Shortly before the end of the half, junior forward Baylee Robinson stopped the bleeding of the Gaucho offensive aggression, by scoring a basket for the Aggies with 6:10 remaining in the second quarter. That basket was the last basket of the first half for the home team, though, as New Mexico was outscored 26-6 in the quarter.

Defense was an immense factor in the game, as UCSB smashed the Aggies on the battle of the boards, outrebounding the home team 47-32. Santa Barbara held their opponents to an 18-point first half, creating the separation they needed to approach the half with a handsome lead.

It was a 50-18 lead for the visiting team at the half, and the Gauchos made sure not to let the break cool them off, as they went on an 8-0 run to open the third quarter.

The visitors steamrolled their way into the fourth period, in command of a 39-point deficit with the score sitting at 67-28 in their favor.

While New Mexico State did manage to ignite their offense, and outscore UCSB 19-10 in the fourth quarter, their resistance to feat was futile as it was simply not enough to overcome their opponents.

Bench play has proven to be a bright spot for UCSB yet again, as the bench stats were asymmetrical, in favor of Santa Barbara. The bench of the road team outscored the Aggies 32-7.

Porter led her team in scoring, contributing a booming 17 points, Bates added 11 to the score, and redshirt junior forward Drew Edelman hit her typical double-digit game by sprinkling in 10 points.

Freshman center Natalia Bruening grabbed a career-high 12 rebounds, while freshman guard Danae Miller dished out six assists, leading the game in dimes. All Gauchos that played in the game got a chance to score a bucket and grab at least one rebound, solidifying their attempt at a balanced attack.

New Mexico State’s freshman guard Brooke Salas gave her team a much needed 18 points, which was a game high, while her teammate sophomore forward Jasmine Cooper was second in scoring for her team lending 14 points to the score.

UCSB will open up its Big West Conference journey at home in the Thunderdome, against Long Beach State on Jan, 4 at 7 p.m.