The Daily Nexus
Sports
Gauchos Sting Hornets With Double-Digit Win
December 26, 2017 at 12:19 am by Spencer Ault 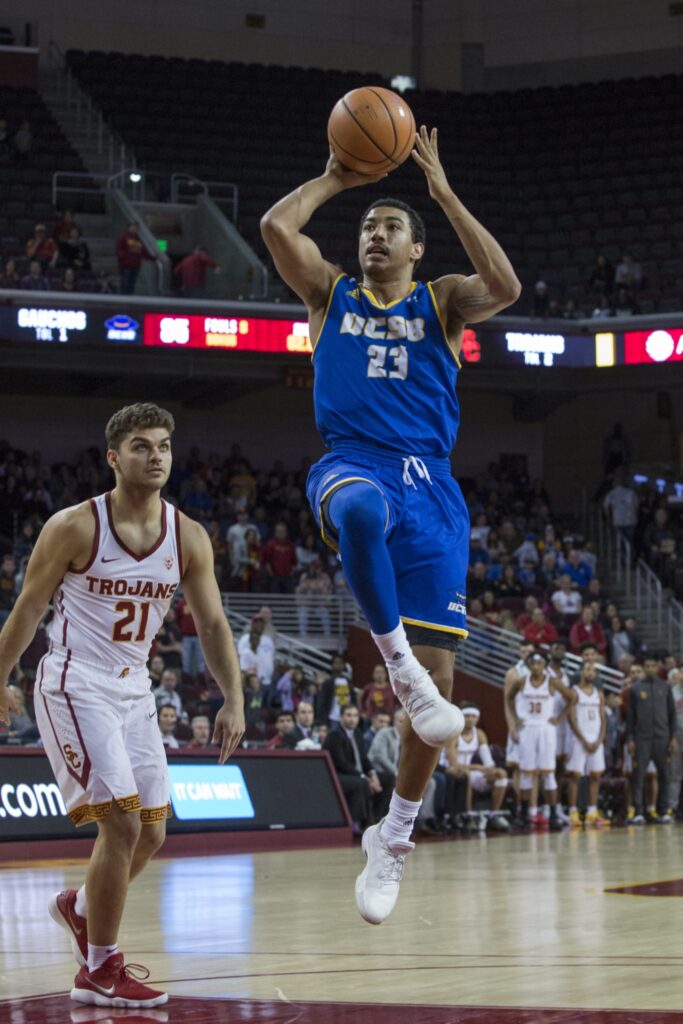 With just three minutes remaining in the first half, it appeared that the UCSB men’s basketball team was in for a much closer game than it had maybe expected against Sacramento State on Saturday evening.

After over 16 minutes of play, the Gauchos held a tiny lead of just 31-30 over the Hornets, a struggling squad with just three wins on the season.

One 13-2 run later, and UCSB went into the half with a commanding 44-32 lead. Just like that, the Gauchos had all the separation they needed, as they coasted through the second half to an 82-72 victory in Sacramento to move to 10-3 this season.

After a brutal 1-7 start to the year, the Hornets entered Saturday’s game on something of an upswing, having gone 2-2 in their previous two games. That positive momentum was evident early on Saturday evening.

Sacramento State eked out an early lead initially, thanks to a couple baskets from Izayah Mauriohooho-Le’afa. Before the Hornets could get too far ahead, however, the Gauchos reeled them back and grabbed the lead in with a couple of Leland King II three pointers, both assisted by Marcus Jackson.

UCSB would never relinquish the advantage for the rest of Saturday’s game, but it took the team a while to open up a comfortable margin. Five points from Ami Lakoju, and another two assists from Jackson, pushed the Gauchos to a 20-14 lead, but the Hornets battled back to tie the game back up at 26 with six minutes to go in the first half.

Two minutes later, UCSB had managed to open up only a one-point lead at 31-30. Then, a Gabe Vincent jumpshot opened up the floodgates.

Jackson was integral to the Gauchos’ half-closing 13-2 run. The graduate transfer knocked down two threes and set up Max Heidegger for a layup, all of which combined to give UCSB its first double-digit lead of the game at 41-30. One minute later, the horn sounded and the Gauchos decamped for the locker room with a 44-32 lead.

A layup by Sac State’s Justin Patton kicked off the second-half scoring, and brought the Hornets to within ten, but that was as close as they would get for the majority of the last 20 minutes. The Gauchos kept their hosts at a consistent arms-reach throughout the period, never letting the margin grow too thin.

Senior forward Jalen Canty shouldered the bulk of the UCSB offensive load in the second half. Canty scored all 15 of his points in the period, as he rebounded from a tough 0-4 first half to go 6-9 from the field in the second.

Canty finished with nine rebounds to go with his 15 points, leaving him just one rebound shy of a double-double. His frontcourt mate Leland King II earned that distinction instead with his 11 points and 12 rebounds, his sixth such performance this season.

Heidegger led all scorers Saturday with 23 points, an achievement that has become fairly wrote for the sophomore shooting guard at this point in the season. Heidegger benefited greatly from the vision and generosity of point guard Jackson, who finished with a game-high eight assists and 13 points.

Sacramento State trailed by as much as 18 points in the second-half, but the Hornets hassled the Gauchos until the final horn.

Jordan Tolbert and Justin Strings, with 13 and 14 points in the second half, respectively, were crucial in Sac State’s late game push to draw back within ten points.

The Gauchos have a week off before their next game, a home contest against Pacific Union at 7:00 pm. The Athletics are an NAIA squad, and are 2-7 this season.