The Isla Vista Food Cooperative is working to help those who have been affected by the Thomas Fire by offering several relief efforts, including a “round-up” change program, a 15 percent discount for evacuees and a food donation bin. 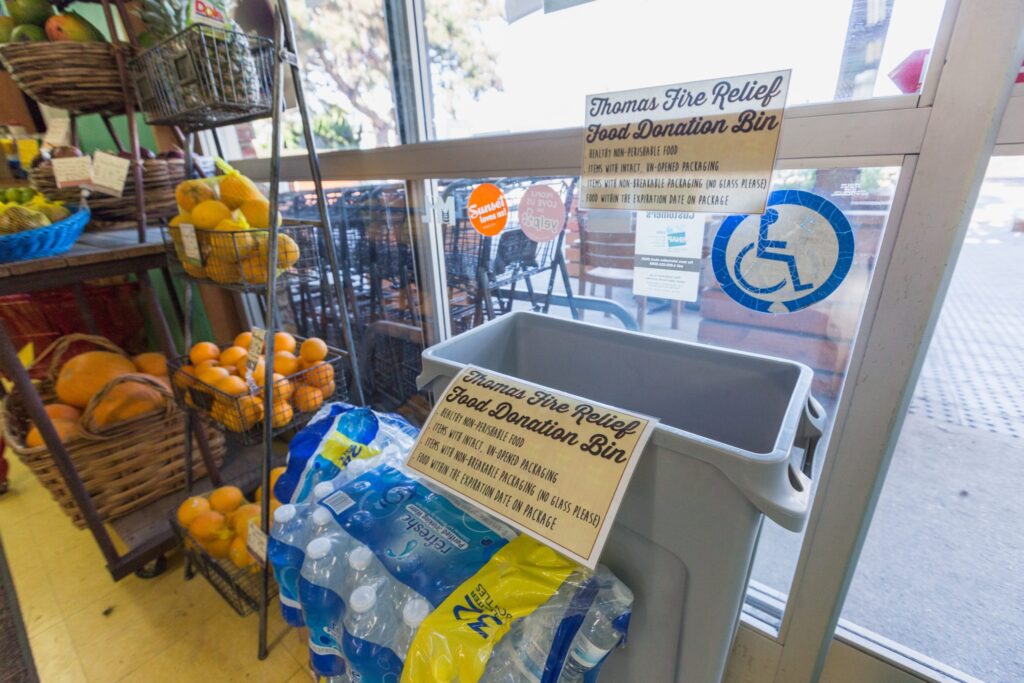 The co-op’s food donation bin is available by the front door. Customers can donate non-perishable items that  are unopened and have non-breakable packaging. Items must also have an expiration date printed on the package. McLane Brown / Daily Nexus

“We have a civic and cooperative responsibility to assist our community in times of need, and right now our community needs us,” co-op general manager Melissa Cohen said in an email.

The co-op was founded over 45 years ago and is Santa Barbara’s only community-owned grocery store.

Cohen explained that the fire has affected not only the people who have shopped at the co-op but also the farmers who grow the produce and other local companies who bring in local produce and products.

The grocery store has easy access to foods designed for people who have allergies or specific diets, which Cohen said will be helpful for people that had to quickly evacuate their homes.

“It’s hard to remember to grab your gluten-free food if you’re celiacs, when you have 10 minutes to think of what’s most important in your home that might burn down,” Cohen said.

The “round-up” program gives customers the option of rounding up their totals to the nearest dollar. The change will be used to purchase basic needs for evacuees, such as food and personal care items.

The business has received over $1,000 in donations from the program and a few direct donations.

The co-op’s food donation bin is available by the front door. Customers can donate non-perishable items that  are unopened and have non-breakable packaging. Items must also have an expiration date printed on the package.

Donated items will be given to the Red Cross Evacuation Site and the Santa Barbara County and Ventura County Food Banks.

She credited assistant store manager Rebecca Roberts with the idea to create a food donation site at the co-op and said the entire process has been a “team decision.” They wanted to save people the trip of donating the food directly to the shelters because the co-op was going to visit the shelters regardless, she said.

So far, the business has been able to offer the 15 percent discount to several people and are hoping that business will increase once evacuees have moved back into their homes.

Even before the fire entered Santa Barbara County, the co-op was working to donate food to the UCSB evacuation center that had been set up in the Multi-Activity Center. The business brought approximately $600 worth of “special diet” food to the shelter, according to Cohen.

The Thomas Fire began on Dec. 4 and has since spread rapidly across the Ventura and Santa Barbara Counties, according to the California Department of Forestry and Fire Protection. It is now at 272,000 acres and is 60 percent contained.

The fire caused power outages in I.V. and on campus during the last two weeks of classes before winter break and led Chancellor Henry T. Yang to postpone finals until January.

Cohen explained that all businesses are suffering because of the fire, but because approximately 16,000 people have evacuated from Santa Barbara and many UCSB students left for winter break early, the co-op’s winter break sales have dropped to a “scary low level.”

“The biggest challenge with generating more donations isn’t lack of people being receptive … we just need people to be in town and grocery shopping,” Cohen said in an email.

The co-op is located at 6576 Seville Rd. and is open every day from 8 a.m. to 10 p.m. Fire relief efforts will likely continue until the end of December but may be extended longer, according to Cohen.

Correction: Cohen said “civic” instead of “civil,” as previously reported.