Members of UC Santa Barbara’s a cappella group, Naked Voices, appeared on Steve Harvey’s daytime talk show, “Steve,” to show off their forte and end 2017 on a high note. 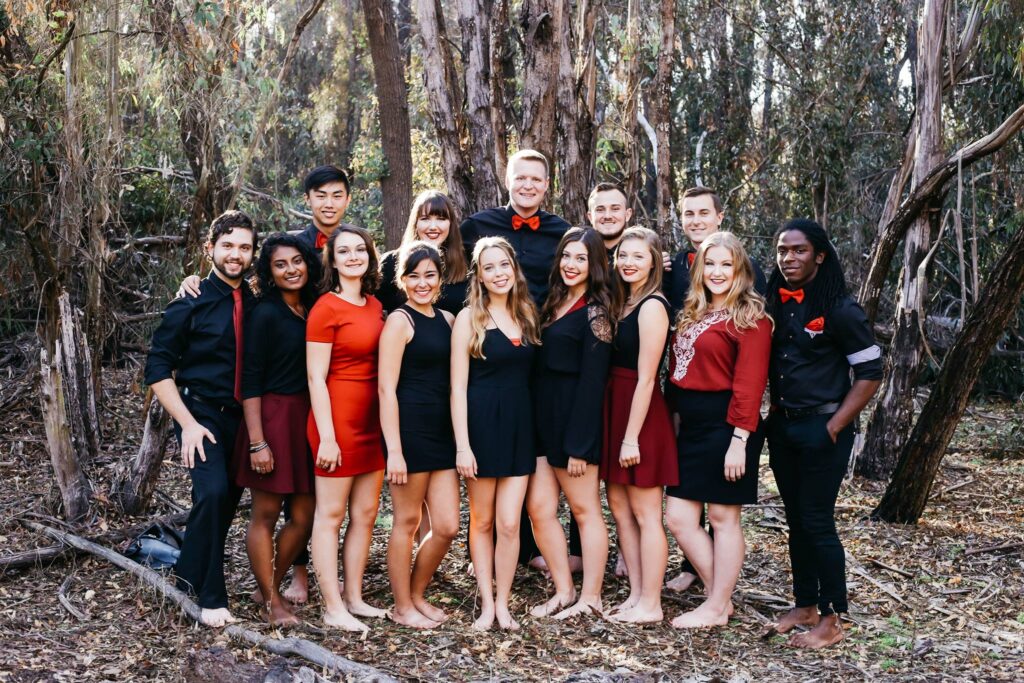 The episode aired on Dec. 14 on NBC and served as a promotion for the final installment of the “Pitch Perfect” trilogy.

The group, which recently shared a showcase in Girvetz Hall with fellow a cappella group InterVals, submitted a tape of one of their performances to a producer of the show. Seven of Naked Voices’ 18 members were chosen to represent the group on the talk show: Katie Kaiser, Kennedy Didier, Jasmine Wahab, Bella Bohn, Brandon Park, Irving Soto and Joe Song.

They were booked to “riff-off” against Backtrack Vocals, a professional a cappella group from New York.

A “riff-off,” popularized by the film “Pitch Perfect,” is a battle between two a cappella groups with specific guidelines broken down by genre, lyrics or theme.

Harvey and Ester Dean, who plays a role in the newest film, judged the competition.

“I think they were all awesome. Aca-awesome!” Dean said during the show.

Though the Backtrack Vocals won the riff-off, Harvey had nothing but kind words for Naked Voices.

“I’ve gotta tell you something; that was tough [competition],” he said on air, presenting the group with tickets to the world premier of the new film.

Katie Kaiser, a second-year communication major and vice president of Naked Voices, said Harvey expressed support for the group behind the scenes.

Kaiser said the group was nervous throughout the performance but supported each other through the act and said she hopes their appearance will present new opportunities for the musicians.

“Mainstream recognition will be huge for Naked Voices,” she said. “Going on primetime shows will lead to future opportunities for the group, including … sales for our album that we put out last [school] year, Naked Voices, Vol. I.”

Bella Bohn, a second-year political science major, echoed Kaiser’s words and said she hopes the opportunity will increase the group’s popularity on streaming services like Apple Music, Spotify or Tidal, where people may find their music.

Brandon Park, a third-year environmental studies major, said in an email that his personal goal for the group is to perform at the International Championship of Collegiate A Cappella (ICCA), and “blow the competition out of the water!”

Kaiser expressed gratitude for the UCSB community, which she believes has attributed to the success of Naked Voices.

“We are so grateful to get an opportunity like this. We hope to make the UCSB community proud by representing our school to the best of our abilities through our love of music and entertaining others,” she said.

Since its founding in 2000, the group has released three studio albums and won several awards at a cappella competitions, but this is their first appearance on a popular talk show.

However, they are not the first group from UCSB to appear on one of Harvey’s shows.

Approximately 30 members of the UCSB Gospel Choir appeared on “The Steve Harvey Show” (which ran from 1996 to 2002), according to gospel choir director and lecturer Victor Bell.

Naked Voices’ most recent album, Naked Voices Vol. 1, which was released in 2017, features a mix of classics, from Marvin Gaye and Tammi Terrell’s “Ain’t No Mountain High Enough,” to more contemporary songs, such as Beyoncé’s “Crazy In Love” and “Chandelier” by Sia.

Naked Voices is one of five a cappella groups on UCSB’s campus. The others are InterVals, Brothers From Otha Mothers (BFOM), Ravaani and VocalMotion.

Park, who is a member of both Naked Voices and BFOM, described the a cappella scene at UCSB as “a family of five groups.”

“At its core, a cappella, in my opinion, is less about the fame and applause, and more about creating sincere music in the way that humans have used to bond with each other and emotionally develop since our earliest existence!” Park said in an email.