When the Thomas Fire burned through Ojai in Ventura County last week, Jamie Beaudry had no idea she would lose her home to the flames. 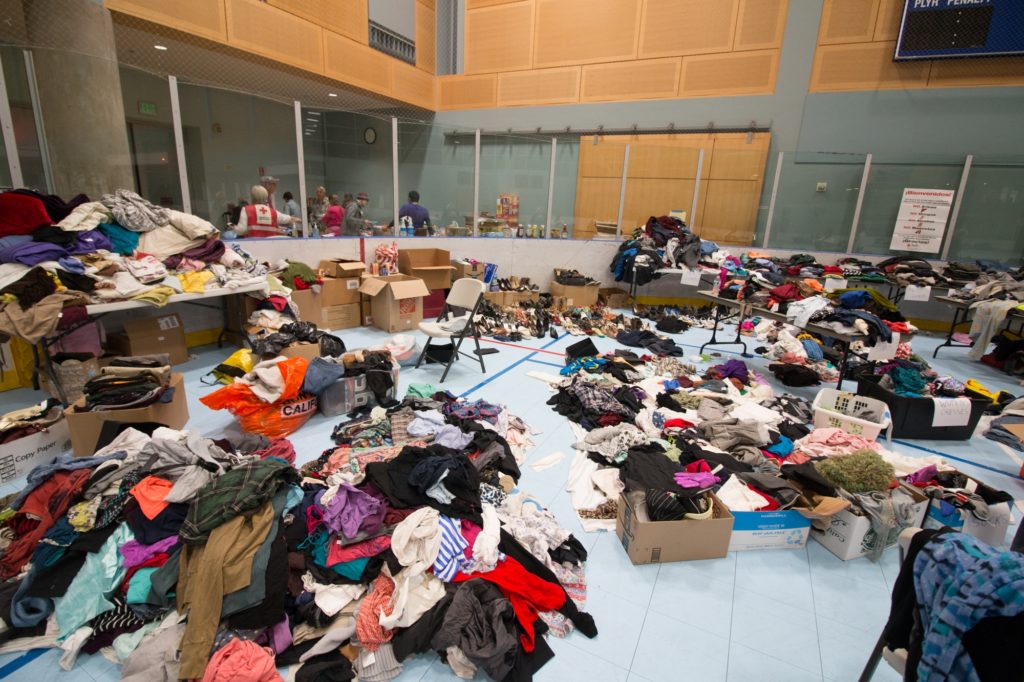 Boxes and boxes of clothes were donated to the evacuation centers for those who lost their homes to the Thomas Fire. Stephen Manga/Daily Nexus

Beaudry is one of the Thomas Fire evacuees that has sought refuge at UC Santa Barbara’s evacuation shelter in the Multi Activity Center (M.A.C.). She said she only had 15 minutes to collect her belongings before she left her home for the last time.

“Our places was one of the first to go,” Beaudry said.

“I believe everything happens for a reason… We can find another place. So long as we have our family,” Beaudry added, gesturing to her dog.

Beaudry is unsure how long she will stay at UCSB’s shelter and said she first went to to a campsite in Carpinteria before arriving at UCSB due to an initial lack of transportation.

UCSB opened an evacuation center on Tuesday, Dec. 5, which has served as a temporary home to over 100 evacuees affected by the Thomas Fire.

The Thomas Fire began Dec. 4  and caused intermittent blackouts across the UCSB campus and in Isla Vista last week.

The fire has burned across 252,500 acres and is 35 percent contained. According to Cal Fire, 972 structures have been destroyed and 218 have been damaged.

Members from the Pacific Coast Red Cross and UCSB students began working at the center immediately after it opened.

“Especially as as a college student when you’re a little tight on money, the only thing you can donate is your time,” said Vivian Vo, a third-year English major, who spent this past Saturday evening volunteering at the M.A.C. 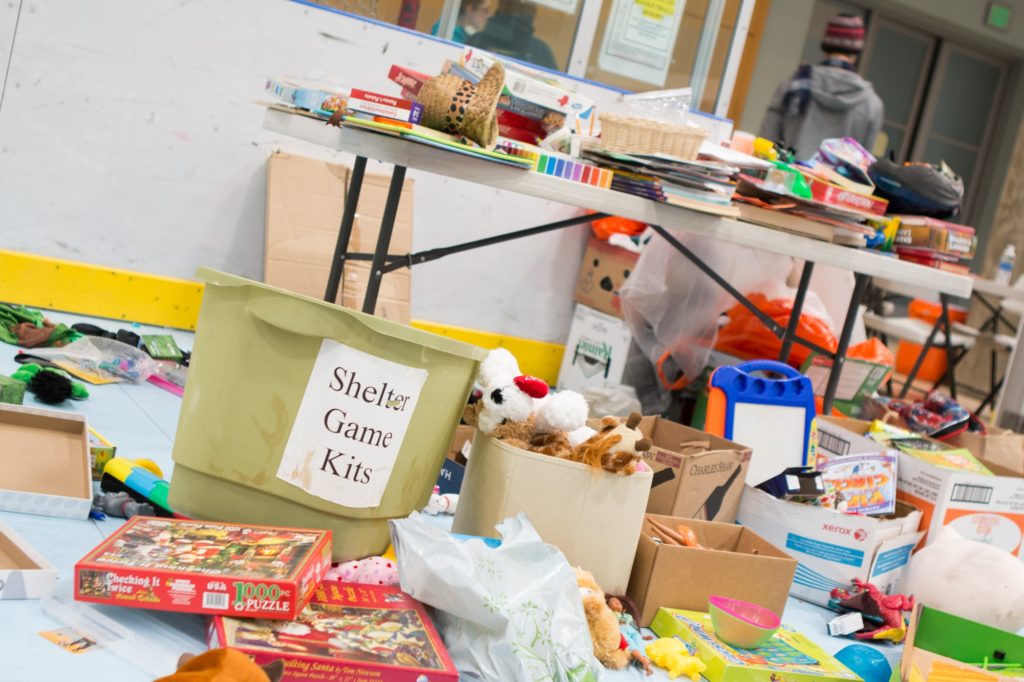 Donated items including board games and stuffed animals arrived at the UCSB evacuation center to help those who lost their belongings in the Thomas Fire. Stephen Manga/Daily Nexus

Inside the shelter, evacuees organize their belongings on green cots, waiting for updates about the fire. Many call their families on the phone, while others sit at tables to eat dinner with other evacuees.

Some evacuees come to the shelter for meals, but choose not to sleep at the center.

Smaller children stay near their parents, while others play ping-pong with Red Cross employees or run around the center in excitement.

Howard Hollande, a Carpinteria resident, arrived at the center with his wife and daughter on Friday, Dec. 8. 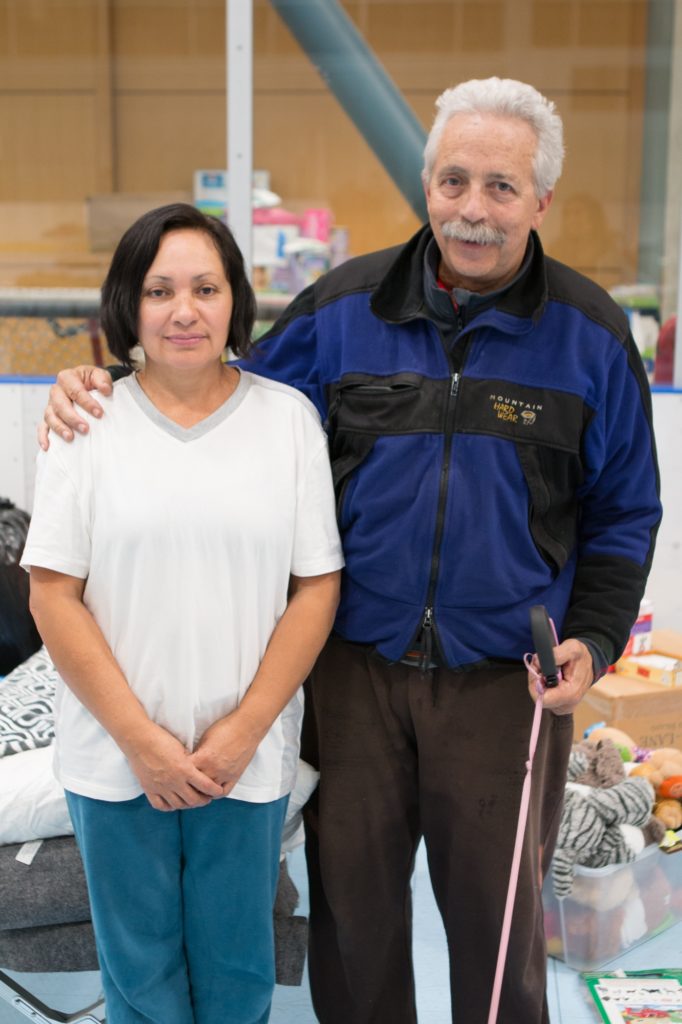 Howard Hollande with his wife and dog. Stephen Manga/Daily Nexus

As Hollande untied his dog’s leash from the leg of a cot, he spoke about his experience evacuating. He said he arrived to the evacuation center on Friday but left when he was told it was safe to go.

Hollande woke up to a knock on his door at 3 a.m. early Sunday morning alerting him that he had to evacuate once again.

Hollande appeared calm and even said that he went back to his house earlier that day to check on everything. His wife remained hesitant to return home.

“I spoke to the police now, and they told me I could go back… I just have to convince my wife to go back,” he said.

Many evacuees at the center said they had little time to gather their belongings before they had to leave their homes.

Erica Dahl, another evacuee from Carpinteria, woke up at 4:30 a.m. on Sunday to see flames from her door. 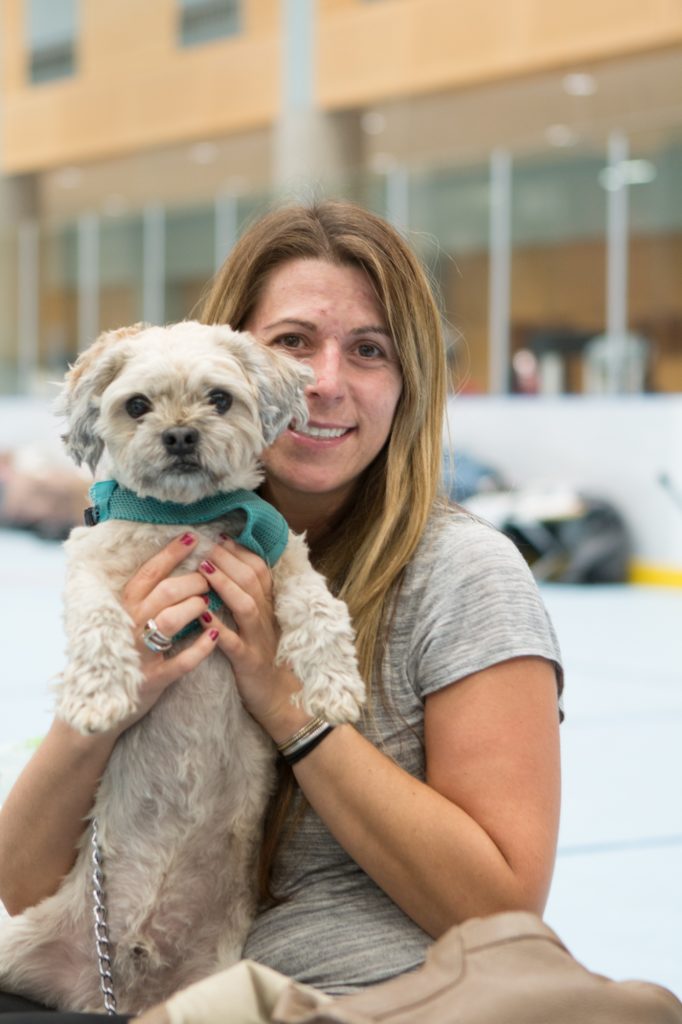 Erica Dahl with her dog in the M.A.C evacuation center. Stephen Manga/Daily Nexus

She evacuated and arrived at the evacuation center later Sunday morning.

Dahl expressed frustration with the lack of communication between county officials and the public. She thinks evacuees would have had enough time to gather their belongings had they been told to leave sooner.

“It’s not about whether we’re allowed to go back or not… The communication has just been horrible,” Fletcher said. “I understand the first two nights of the fire, but by the sixth night…”

Gerardo Rodriguez arrived at the center from Carpinteria on Sunday with his wife, son and daughter. He only had about 20 minutes to gather his things after getting the evacuation warning on his phone. 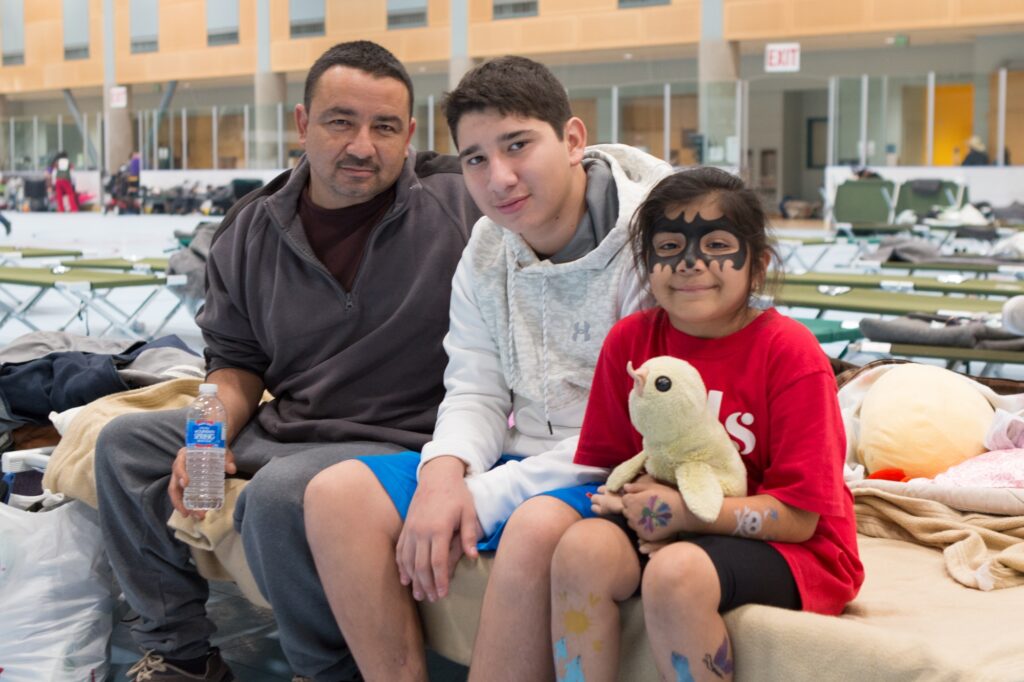 Gerardo Rodriguez pictured with his son and daughter after evacuating their Carpinteria home. Stephen Manga/Daily Nexus

His son expressed excitement about the cancellation of his high school finals.

Ojai residents Jordan and Laura, who preferred not to give their last name, brought their puppy to the evacuation center when they evacuated. 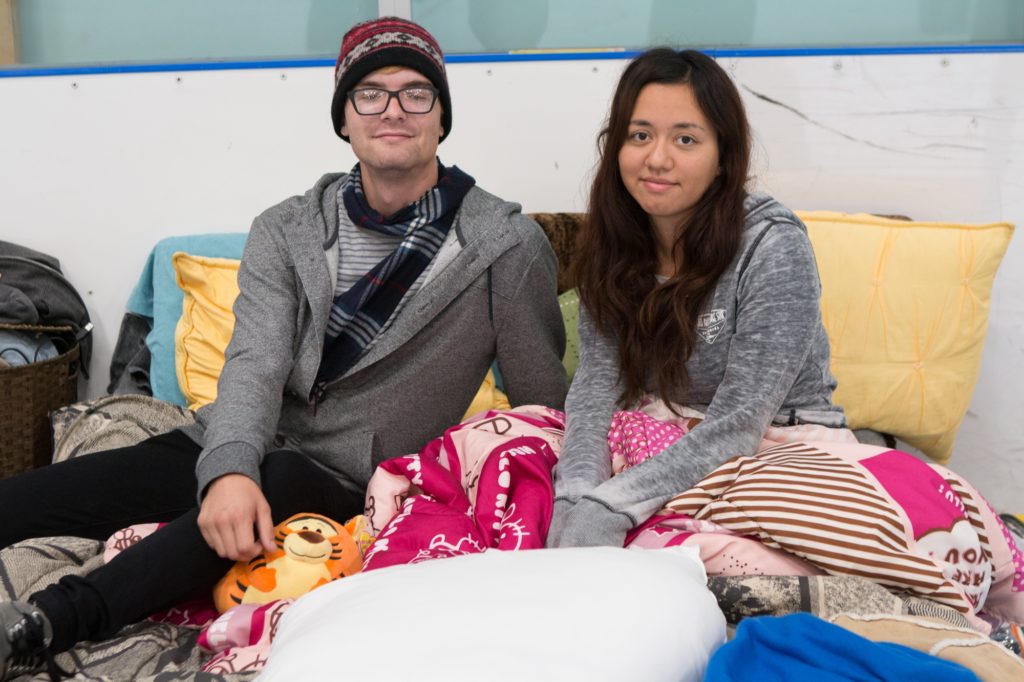 Jordan and Laura are unsure whether their home survived the flames from the Thomas Fire, but won’t check until air conditions improve. Stephen Manga/Daily Nexus

Neither knew if their home had burned, but they said they were not planning to check on their home because of the unhealthy air quality.

Carol Janssens, a representative of Red Cross, expressed gratitude toward UCSB for the evacuation center, as the university has provided tables and other resources.

“I’ve been at lots of places before and lots of shelters… and I’m just really appreciative of all of the work they’ve done and how helpful they are,” she said.

Erick McCurdy, Red Cross shelter manager at UCSB, told the Nexus on Dec. 5 that the Red Cross is committed to keeping the shelter open for “as long as it takes.”

Other emergency resources for UCSB students can be found here.

Correction: This article was updated to include Erica Dahl’s name. Her contributions were originally attributed to Maija Fletcher.