The Daily Nexus
News
Art Piece on Campus Asks Students To Confront Sexual Assault
December 15, 2017 at 12:25 am by Hannah Jackson

When students passed by the Storke Tower lawn at the end of Fall Quarter, they may have been surprised to find a large set of letters reading “#ME TOO” covered in flowers on the usually barren grass. 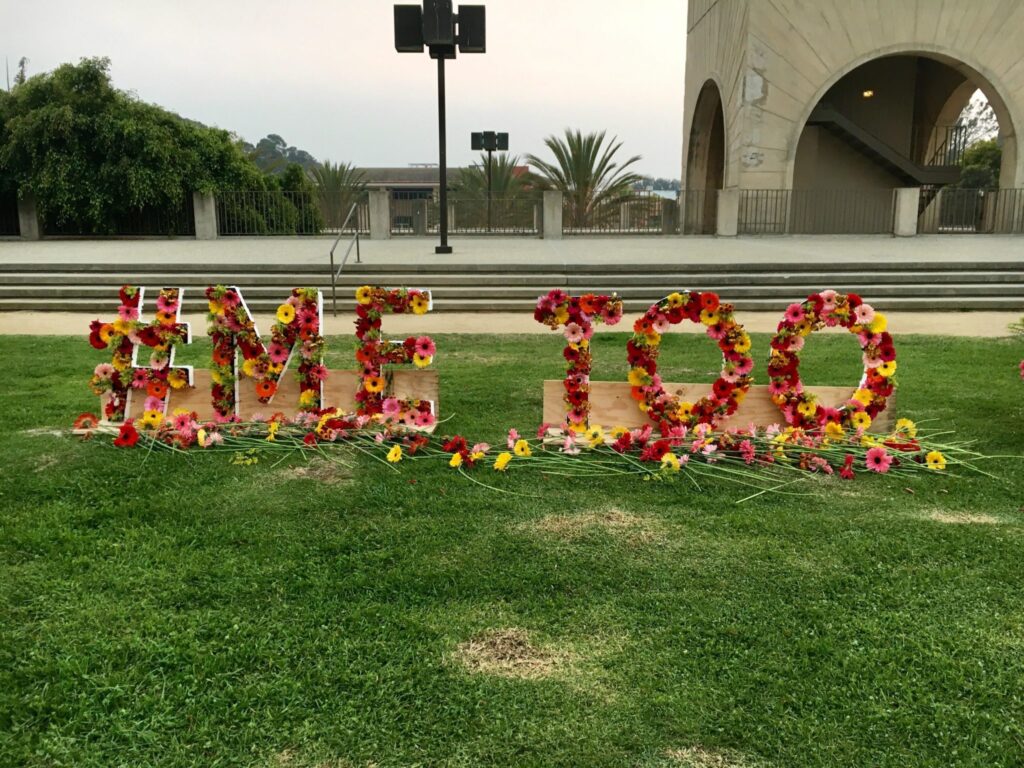 Next to the piece are four large buckets filled with flowers and a sign that read “If ‘#me too’ applies to you or someone you know, please feel free to take a flower and set it down.”

Jenny Jimenez, the artist behind the piece, was tasked with creating a public art piece for her Art 7B final. Jimenez, a second-year undeclared major at UC Santa Barbara, settled on the idea for her interactive sculpture due to the recent impact of the movement.

Jimenez said in an email that the #MeToo Twitter hashtag recognizes how many people, mostly women, are sexually assaulted and “exposes the alarming numbers.”

Jimenez said the project has a great deal of personal significance to her because she is a survivor of sexual assault.

She said she found it very difficult to acknowledge and speak of her experience, but that she regained a sense of hope and power after seeing the #MeToo movement trending on Twitter.

When designing the project, Jimenez was initially worried that simply posting a large sign with the hashtag would be too obvious, but quickly noticed that many students were still unaware of the meaning behind the viral campaign.

“I didn’t want people to think that I was trying to turn a subject that’s so important and disgusting into just a pretty photo opp or something ‘aesthetic,’” she said in the email.

Jimenez said she believed it would be powerful to see how many flowers stacked up on her art piece, representing how many people have been affected by sexual assault directly or indirectly.

Many students choose to complete their projects off campus in Isla Vista, but Jimenez said for her that was not an option.

“I insisted on my piece being on campus because that’s the main audience I wanted to view my piece: my own peers,” Jimenez wrote in an email.

Jimenez chose to display her project at Storke Tower because she felt that is where it would attract the most visibility. 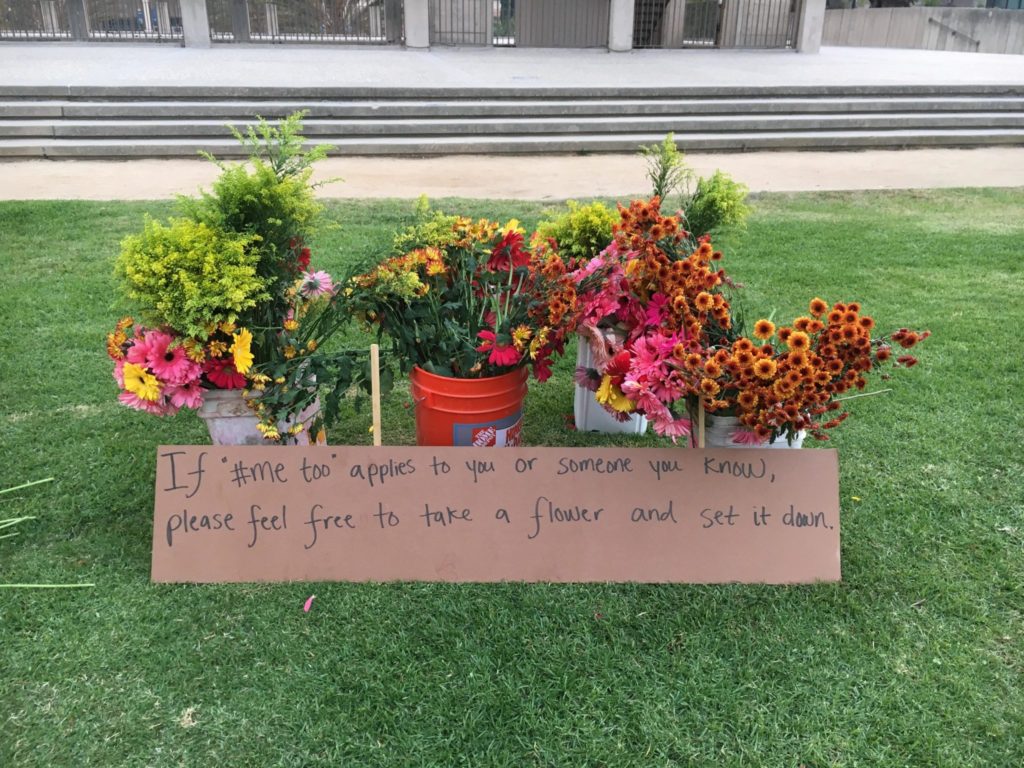 Passersby are encouraged to place a flower on Jimenez’s art piece if they or someone they know has been affected by sexual assault. Hannah Jackson / Daily Nexus

She said art students are often deterred from displaying their final projects on campus due to the time constraints of the project and the difficulty of getting permission from the university.

Jimenez decided not to submit a request to display her piece on the Storke Tower lawn.

“I figured in the context of my own project, it’s better to ask for forgiveness than permission,” she said.

While Jimenez could be creative with the idea and creation of the project, she said she is grateful for the input and help she received along the way.

She said the project would not have been possible without the support of three people: her professor, her aunt who owns a Carpinteria flower shop and UCSB woodshop technician Michael Matheson.

Jimenez said she has mostly received positive responses to her piece, yet some people are still unaware of the topic.

She added that students have also responded positively on social media.

“All positive responses so far where people realize the importance of the topic and continue to make this a supportive platform for victims to feel heard, accepted, and loved,” she said in the email.

On the days following the installment of her piece, students and faculty could be seen on Storke Tower lawn, placing flowers and silently observing.

Jimenez’s piece was left on Storke Tower lawn as students rushed home from UCSB due to the Thomas Fire. It remains there today, where Jimenez believes it will remain until maintenance staff returns to work.