The Daily Nexus
Opinion
Should I Stay or Should I Evacuate?: Students’ Focus Disrupted by Thomas Fire
December 9, 2017 at 2:55 pm by Naima Sudjian-Carlisle 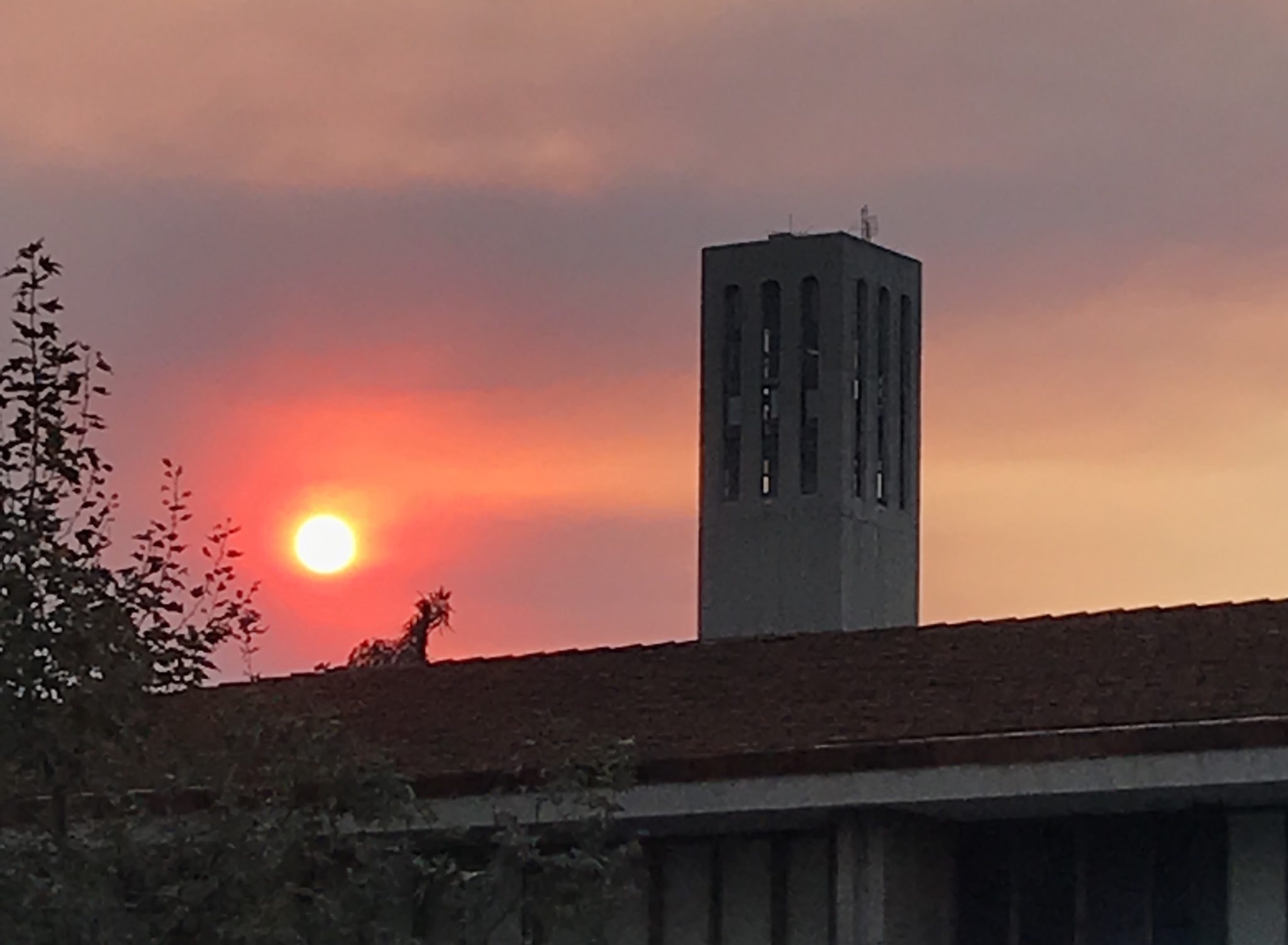 Monday night was the first day of dead week, the week all UCSB students prepare for finals on the following week. At around 9:50 p.m. PST, the lights in Santa Barbara and Ventura County flickered into darkness. Eerily, the electricity turned on and off intermittently until it finally was recovered at around 2 a.m. the next day. Curiosity of the cause of the blackout loomed, but students continued studying by flashlight, some even by candlelight.

At 8 a.m. the next morning, thick smoke travelled north into the view of Los Padres Mountains; news spread that Ventura County had been engulfed in the Thomas Fire, which eventually led to the blackouts. There was enough distance between Santa Barbara and the fire, but the smoke was a constant reminder of the danger brewing down south.

Everything was the same except for the inescapable smell of fire, chemicals and the apocalyptic neon orange sun setting behind Storke Tower in the west. Business as usual continued until Thursday afternoon when UCSB students and faculty got an email that officially cancelled all classes for the remainder of the week. For almost three days, conflicted students, some with asthma and others with serious health issues chose travelling to campus and studying for finals over their health.

Potentially the most current and pressing event to discuss in class, there was no mention of the fire by any professors in lecture nor email from administration warning students of safety precautions to take. It was as if administration were turning a blind eye to the Thomas Fire until Thursday afternoon when white ash floated like snow.

There is a sentiment that the administration was negligent in addressing a serious threat to the safety and well-being of students.

Chancellor Henry T. Yang sent the student body another email on Friday assuring that professors would be flexible if any students needed to evacuate during the scheduled time of their finals. However, this policy was vague and did not cancel finals altogether, meaning that students are still compelled to remain on campus and breathe the hazardous air unless they are able to coordinate a different option with their professors.

California has a history of colossal fires. In Southern California especially, conditions are dry, shrubs and grasses abound, and strong Santa Ana winds carry speeds between 60-70 mph. Those specific ingredients make the perfect concoction for a brushfire to start and spread. That at least, is believed to be the reason for the Thomas fire, but firefighters are still investigating if it was due to arson.

The unpredictability and strength of the wind is making it difficult for firefighters to contain it. This unpredictability also makes it difficult for students to decide whether to study for upcoming finals, or evacuate to a safer place. This environmental catastrophe raises more questions among UCSB students regarding the importance of their health. There is a sentiment that the administration was negligent in addressing a serious threat to the safety and well-being of students.

AIRNow, a governmental website that collects data on air quality considered Santa Barbara air “very unhealthy,” one step away from “hazardous.” People with lung and heart conditions in the area have been advised to evacuate. Everyone else is mandated to remain indoors and stay updated to see if emergency evacuations will be necessary. Currently, with all of the smoke and debris, there is no clear path in sight for people to take.

Natural disasters serve as a test of humanity, with the potential to bring people together, or leave them in the rubble.

Many are beginning to feel the heat of the fire now, and the fires to come. An overarching phenomenon that some deny, but is occurring right before our eyes, is the consequence of global warming. Wildfires have always been natural processes on Earth, but global warming exacerbates the severity of them. Along with fire suppression, longer periods of drought and heavy irregular rain that spur the growth of grasses (but then later dry out), more frequently will fires devastate land and homes.

California is the sixth-largest economy in the world, yet there exists a huge disparity between the haves and have-nots. Those with money are afforded the ability to escape disaster, but what happens to the people who can barely afford rent, let alone flee a situation that may leave them homeless? One thing about the laws of nature is true — it does not discriminate.

People of all socioeconomic backgrounds are affected. Natural disasters serve as a test of humanity, with the potential to bring people together, or leave them in the rubble. With more disasters looming ahead, we must put our differences aside to help our fellow human-beings. Even more, it is imperative we realize our similarities, and find inventive ways to address our impact on the Earth for right now and the generations to come.

To bring urgent focus back to the current situation at hand, the administration of UC Santa Barbara should make a concrete decision to cancel finals or give students the option to do a take-home final in all of their subjects. It is imperative to allow students to evacuate if they wish to do so. The email sent by Chancellor Yang on Friday afternoon is vague and allows too much flexibility for professors to maintain a finals schedule that makes it difficult for students to evacuate. New forms of tests should be adapted to an online format in order to give students the chance to complete it without the stress of a looming fire or feeling physically ill from inhaling debris and toxic air.

Students need adequate time to evacuate and search for safe transportation arrangements. Several highways and railroad tracks are closed due to the fire, so students may need to get creative in finding a safe way back home. Many students continue to express their inability to focus in these conditions as the days drag on. Especially because particulate matter is difficult to detect, it is hard to be certain how this affects our health in the future for the long term. Prevention of health issues should be the main focus right now on the part of the administration. Due to the late fire warnings and the miniscule information that was disseminated in regards to health protocol, this seems a meager request to ask.

Naima Sudjian-Carlisle wants UCSB’s administration to get serious about the Thomas fire and take more effective measures to preserve students’ health and safety.