This past year contained countless pivotal moments for music. New artists emerged and familiar figures returned in one of the most dynamic and evolutionary displays of music to date. Here’s a chronological wrap-up of Artsweek’s favorite releases of each month.

January: Atlanta rap trio, Migos, puts out their sophomore LP, CULTURE, to kick the year off with one of the most popular and influential rap albums of 2017. The group provides hit after hit on the adlib-laced album, garnering buzz from their fans and their contemporaries alike.

March: Minnesota emo band Remo Drive releases a well-structured collection of their best work so far. The LP includes cuts like “Yer Killin’ Me” and is sure to evoke your inner teenage angst. Remo Drive crafts witty lyrics and dynamic instrumentation with this project, laying a foundation for future development of their current sound.

April: One of the most iconic albums of 2017 was Kendrick Lamar’s fourth studio album, DAMN. This project solidified Lamar as a consistent, dominant force in contemporary rap music and hinted at a possible sequel to the album in upcoming years. DAMN. is a powerful blend of his past projects; we can see hints of Section. 80 and Good Kid, M.a.a.d City all over this project.

May: Mac DeMarco releases one of his most thoughtful projects to date with This Old Dog, an album packed with somber yet lovely tunes. This project displays a deviation from Mac’s traditional style, exhibiting a less poppy but more introspective flair to its tracks. That’s not to say that there aren’t familiar elements of the artist’s style to be found in This Old Dog — you can still find that lovable, twangy guitar of his throughout the album.

June: Jumping right into the summer, Texas rap collective Brockhampton releases the first album of the Saturation trilogy. Saturation is quite possibly my favorite release of the year and proved the group to be a simultaneously experimental and accessible force in today’s music scene. Tracks like “Gold,” “Heat” and “Star” highlight the album’s quirky undertone and stunned the world with their unexpectedly phenomenal quality.

July: Tyler, The Creator is back, this time with a slightly altered sound. Unlike the aura of some of his preceding projects like Goblin, Wolf and Cherry Bomb, his latest release, Flower Boy, is a whimsical joyride through the artist’s illustrious mind. The record is packed with features from artists like A$AP Rocky, Kali Uchis, Rex Orange County and Frank Ocean, to name a few. With this self-produced release, Tyler continues to grow as an artist and display the breadth of his creative abilities.

August: In August, Brockhampton released yet another project within a mere two-month span. Saturation II shares the same theme of Saturation with a slightly more refined sound. I would argue that this project is catchier than its predecessor, although there are certainly redeemable qualities to both. During the rollout of Saturation II, Brockhampton failed to drop a lackluster single. If you’re unfamiliar with the group, I would suggest starting with this project and then moving to Saturation. Tracks like “Gummy,” “Swamp” and “Queer” are sure to take you for a ride on a sonic rollercoaster.

September: Canadian dream pop act Alvvays released one of our favorite pop records this year. The vocals on Antisocialites are nothing but angelic. Lead vocalist Molly Rankin delivers track after track of sweet melodies to accompany the album’s delightful guitars. If you’re into indie pop with a dreamy accent, be sure to check out this album.

October: After leaving Def Jam Recordings, Big K.R.I.T. put out what is perhaps his strongest project, 4eva Is a Mighty Long Time. This monstrous, 90-minute LP is both hard-hitting and full of lyrical content, delivering a captivating narrative of Southern rap.

December: N.E.R.D is slated to drop their forthcoming album midway through December. The record will feature verses from artists such as Kendrick Lamar, Gucci Mane and André 3000. As of now, only one single from the project has been released; however, this track is an absolute banger. With a feature from Rihanna, the bubbly “Lemon” is a danceable return for N.E.R.D. 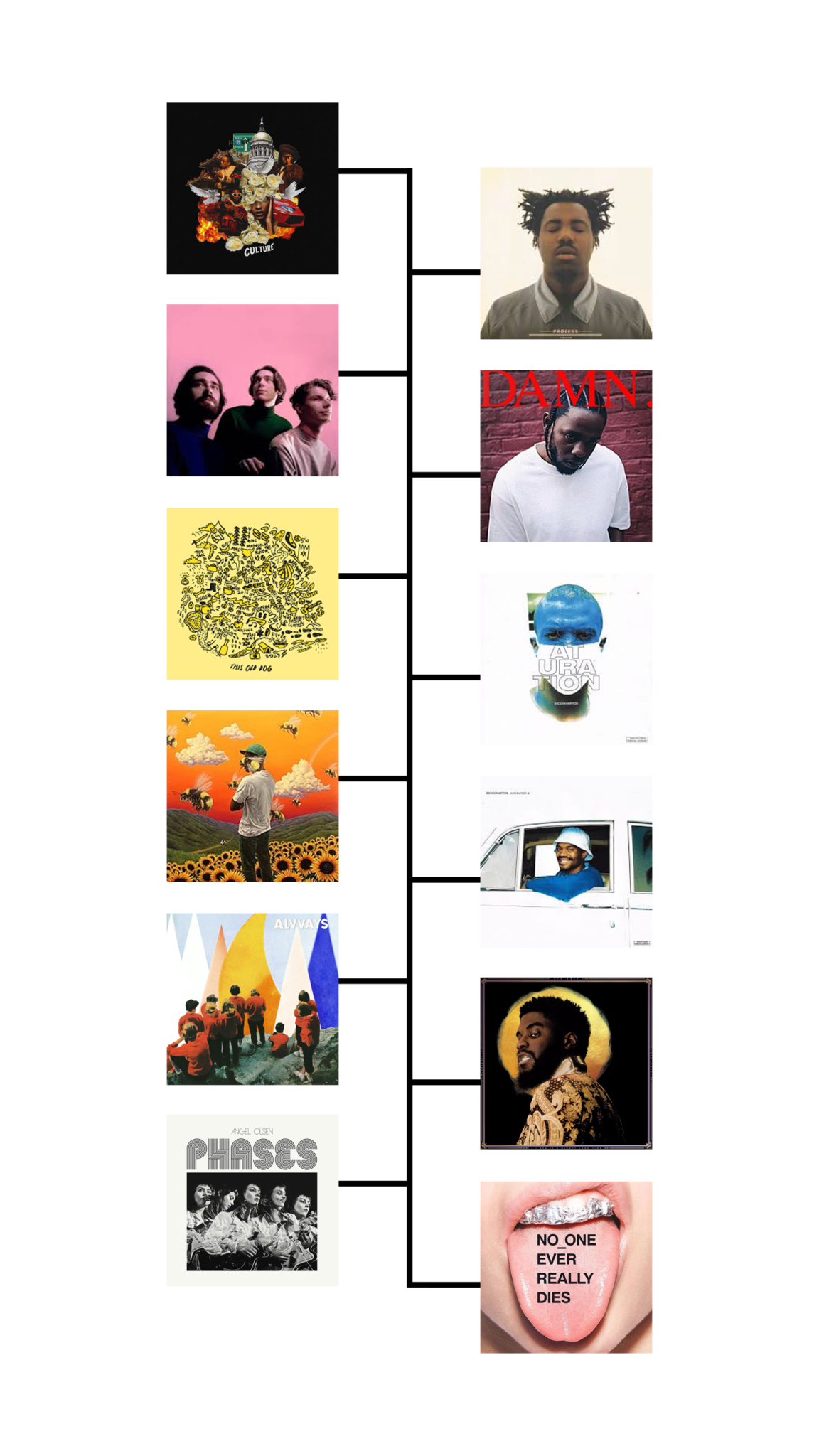 From January to December, Artsweek reflects on pivotal albums from all 12 months of the year. William Emmons / Daily Nexus