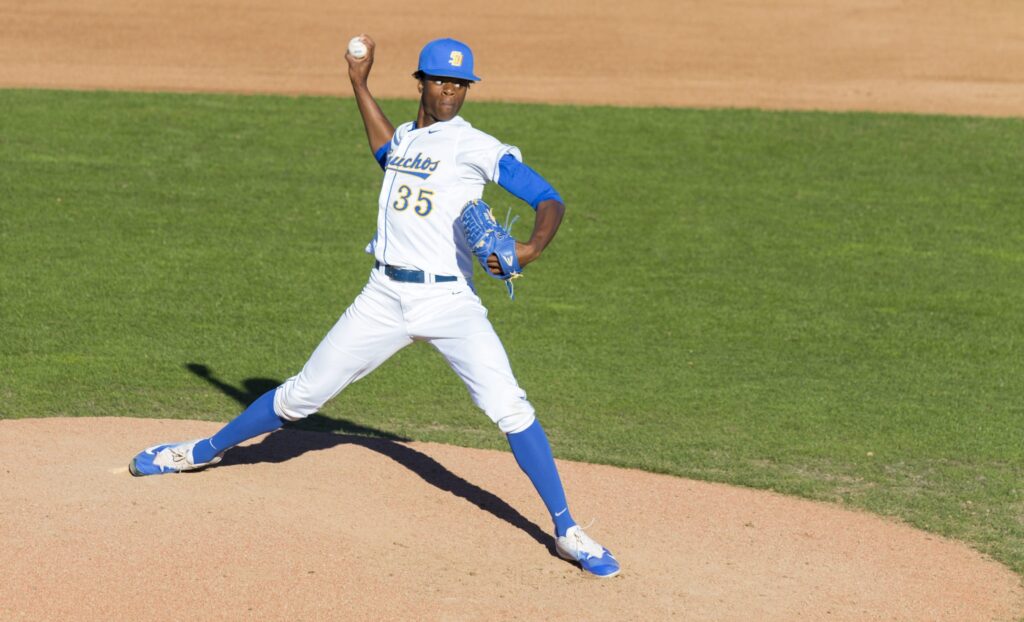 As the weather becomes colder and the fall quarter winds down on campus, so do on-field activities for the UCSB baseball program. After a difficult season last year, finishing with an overall record of 24-32, many others and I were interested to see what would happen to the Gauchos once fall arrived.

As autumn came and went, the same fall ball clichés that happen to every team across the country occurred; players fought for spots, many took advantage of the weight room and some guys who you thought wouldn’t struggle did, while others you would not expect to do well flourished.

This is all too typical of fall college baseball. There were, however, several unique and interesting storylines that arose, including the rise of another top prospect in Gaucho blue and gold, a recovering team leader and much more.

Noah Davis, Noah Davis, Noah Davis: Do not forget the name Noah Davis, especially come spring time. Last season, the Gaucho ace was 7-4 as a sophomore with a 4.63 ERA and 65 strikeouts in 81.2 innings pitched. Although still impressive, even Davis himself would tell you those numbers are not good enough, at least for him.

Over the summer in the Cape Cod League, Davis garnered the attention by many, if not all, MLB teams after being named to the Top-25 Prospect List by D1 Baseball. In an intentionally limited five appearances for the Cotuit Kettleers, Davis had an ERA of 2.83 against some of the best hitters in the country. As a result, Davis started on the mound every day in the fall, even in an inter-squad game that was the highly anticipated MLB Scout Day.

Dozens of scouts were there all fall with their radar guns up and ready, seeing Davis reach speeds of up to 97 mph on his fastball and impressive late-life movement on his slider.

Even though Davis did show a lot of promise in many inter-squad scrimmages, he would leave his fastball up at times, resulting in many hittable pitches from hungry players trying to get noticed by scouts as well.

“I would not say I faired too well against our competitive hitters, but I can see the way they compete when I’m on the mound,” Davis said after UCSB’s last fall scrimmage of the year. “I don’t think my game stepped up as much as it needed to or as much as I would like it to. My goal for the fall was to stay healthy the whole way through, which I was able to do. I’ve been working on fastball height too, which has taken a step back in the past two weeks, but I am still feeling I’m headed in the right direction.”

A huge story last season for the Gauchos was the devastating injury to team leader and shortstop Clay Fisher. After medical red-shirting and recovering from Tommy John surgery on his throwing arm, many worried how Fisher would bounce back.

Although not yet swinging a bat and not throwing at any point this fall, Fisher was still able to participate in many on-field activities. As always, Fisher was smoother than silk on ice during practice and scrimmages. Offensively, due to his recovery process, he could only work on his bunting game in the box.

“The only thing I feel like I was limited on was taking live at-bats,” Fisher said. “I’ve been taking ground ball reps, I know I can’t throw, but I feel the same in the field as I was in the past so I think I progressed just as well [as anyone else this fall].”

Many are speculating and questioning the timetable of Fisher’s return, but Fisher wants to let everyone know everything will be alright.

“I do think that I’ll be 100 percent. It might not be right at the beginning of the season, but I’m definitely making strides. I feel good and I really don’t have any doubts,” the star shortstop said.

Besides Clay Fisher, other guys were feeling good and not doubting themselves as well. Sophomore Eric Yang, who only had 30 plate appearances in his freshman season, showed up this fall squaring up the pelota, driving the ball gap to gap and around the entire field.

If you have been paying attention to Yang this summer, though, this is not really a surprise. Again, Yang was another Gaucho who had a fantastic summer hitting .360 with 27 RBI in 36 games in the Great West League for the Medford Rogues.

Another player who hit the ball well in the fall was junior Michael McAdoo. McAdoo was finding barrel after barrel after barrel all fall, mashing the ball and crushing homeruns in inter-squad games. Making only spot starts and difficult pitch hitting appearances last season, McAdoo hit .227. However, after this breakout fall, with last season’s left fielder Billy Fredrick graduated, McAdoo is making his case to be the Gauchos’ starting left fielder come spring.

Even the rookies were a cornerstone to how the fall unfolded.

After having the No. 9 recruiting class in the nation last season, this year the Gauchos were ranked in the top 25 once again at No. 22 in the country by Baseball America.

Nonetheless, some of the youngbloods showed up to play some ball. Three freshmen who can have a potential impact in the spring are RHP Jason Willow, catcher/RHP Christopher Troye and second baseman Marcos Castanon.

Willow, the Canadian from Victoria, British Columbia, is a loose, goofy 18-year- old who is slowly proving his worth on the mound but has already proved his worth in the clubhouse, as he has no problem keeping the guys loose. When I asked him what it was like being a Gaucho, the freshman gave a typical Willow answer.

“It’s a cool feeling. I mean, it’s a long time coming, you know, being here, being part of the team. It’s been great so far,” he explained.

Troye, on the other hand, is all business, especially when he’s on the mound. The catcher, who will see more time as a converted pitcher this season, hit 95 mph on the bump and sat consistently between 93-95 mph when on the mound.

While working with pitching coach Matt Harvey, Troye developed a curveball and a late-life slider that proved to be devastating when spots were hit. The only question for this young gun will be consistency in the strike zone and location with pitches come springtime. Regardless, Troye’s live arm has already garnered the attention of some MLB scouts.

The last of the frosh recruits mentioned is second Castanon. Castanon is likely to start at second this year as a true freshman for one reason: This kid can rake.

Castanon has ridiculous hand eye-coordination to the point where he almost always finds ways to make contact with the ball. Although defense is still a concern for the young infielder, his bat will help him find a way into the lineup.

Overall, this fall was convincing as the Gauchos look like an improved squad from last year’s team, purely based on talent and by intensity and focus at practice and during games.

The main concern coming into the fall was pitching as the Gauchos last season had a team ERA of 5.24 and batting average against of .279.

Both starting pitching and bullpen arms looked a lot more lively and competitive over last year’s squad, but only time will tell if that will hold true. With the first game coming up faster than many think on Feb. 16 at San Diego State, the Gauchos seem poised to have a better season than last year and may surprise many throughout the game of college baseball.

Fall baseball, otherwise known as Fall Ball, is arguably one of the toughest times for a college baseball player. Not only are players trying to impress coaches, win jobs, get stronger and become more skilled, but they are also battling hundreds of other students in the classroom as well to stay eligible for the spring season.

As the fall quarter winds down, so does UCSB baseball. As team activities come to a temporary close, it is easy to conclude that the fall was anything but easy for the players.