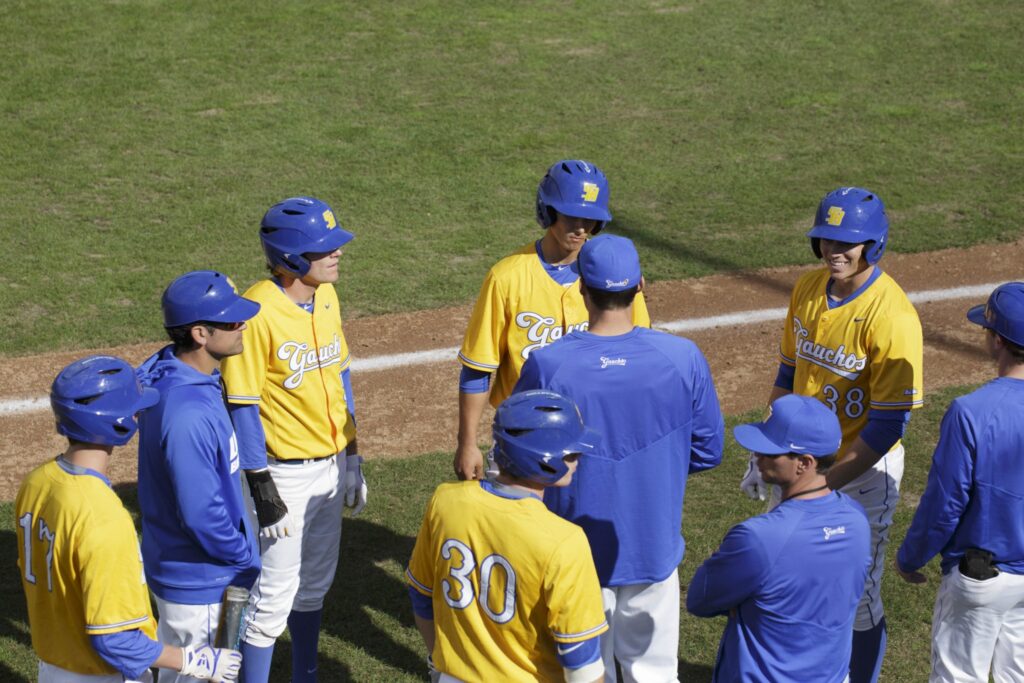 UCSB baseball head coach Andrew Checketts revealed the team’s 2018 schedule Monday, as the team looks to recapture some of the magic from their 2016 run to Omaha.

Propelled by a top 25 recruiting class, the team seems in a prime position to do just that.

Following last season’s 24-32 overall record, as well as their 8-16 finish in the Big West conference, the team will look to lean on these new recruits to return them to the postseason.

UCSB’s top-ranked recruit, Jason Willow, was drafted in the 24th round of the 2017 MLB draft by the Baltimore Orioles but opted to forego turning pro.

The 6’2’’ infielder finished with a .634 slugging percentage in his senior year, and even spent time with the Canadian national team.

The 20-year-old outfielder, who was drafted by the Indians in the 40th round, hit over .400 his freshman year, along with an equally impressive one to one walk to strikeout ratio.

Perhaps most importantly for what was at times a defensive-deficient Gauchos team last season, Kleszcz won a gold glove for his defensive play in center field.

The Gauchos also brought in two top-ranked pitching recruits, Jorge Arellano and Ben Fariss, to bolster a rotation that struggled to a 5.24 ERA in 2017. Arellano, the fifth-rated LHP in California, recorded 51 strikeouts in 38 innings last season for Downey High School and was drafted in the 36th round by the Indians.

Fariss featured as a two-way star at Valencia High School in California, hitting .368 as a senior outfielder while also pitching his way to a 3.43 ERA.

In addition to these recruits, UCSB will return star shortstop Clay Fisher, who opted to return for his senior year rather than go pro due to circumstances outside his control.

Fisher’s season was cut short by Tommy John surgery last year, and he will be welcomed back with open arms after hitting .353 his sophomore campaign.

UCSB won’t have much time to adjust, as they take on San Diego State to open the season Feb.16.

The Aztecs, who finished last season 41-19 and advanced to the regional semifinals, will present a stark challenge for the Gauchos.

After coming home for their opener against Fresno State, UCSB must take on a formidable Mississippi State team that reached the Super Regionals last year as part of the Kleberg Bank Classic Tournament in Texas.

After its final nonconference game March 27 at Pepperdine, UCSB will return home to begin conference play against Cal State Fullerton, a perennial contender in the Big West who reached the College World Series last year.

Last season, Santa Barbara lost two of its three games against Fullerton, and the game will allow the Gauchos to gauge whether they will be contenders or pretenders in the conference this season.

April features primarily conference games for the Gauchos, with a home and away game interspersed against USC.

UCSB swept the Pac-12 school last year in their two games, and will look to do more of the same this season during the midweek matchups.

Toward the end of the season, Santa Barbara will get its hand at Long Beach State, the 2017 Big West champion who beat Santa Barbara in two of its three matchups last year.

If the Gauchos hope to contend in the Big West this season, they will likely need to win the series against the 49ers, which begins May 11.

With a much healthier, more experienced team and an abundance of talented recruits, UCSB will look to prove that last season was merely a fluke and that this year’s team can replicate the Cinderella success that this team was able to find in 2016.