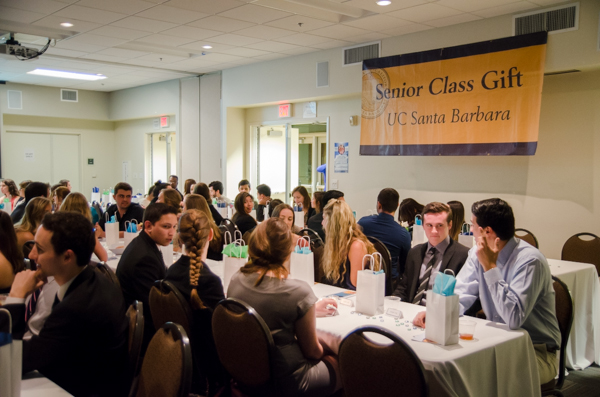 Fundraising for this year’s senior class gift will begin after graduation. The fund will be handled by UCSB C.A.R.E. Nexus file photo

The donor-support fund helps survivors of sexual assault by providing funds to cover unexpected “financial burdens,” according to the organization’s newsletter.

These include costs related to “immediate safety, health, or medical needs, and certain court filing fees for things like restraining orders.”

The fund is comprised of donations from the UCSB community and alumni.

Chandrashekar said alumni pledged over $30,000 for last year’s senior class gift and UCSB First hopes to receive pledges from at least 10 percent of the graduating class. She said fundraising for the senior class gift will begin after graduation.

“UCSB First is so excited for the selection of CARE’s Sexual Assault Survivor Fund as the Class of 2018’s senior class gift,” Chandrashekar said in an email. “Like all of the other choices for the senior class gift, it is such a valuable campus resource.”

C.A.R.E Director Briana Conway said she and her staff were excited that the senior class chose C.A.R.E.

“It was a very uplifting moment for my staff and I when we received the notice and I read it out loud as we all congregated in my office together,” she said in an email.

UCSB First held two voting parties for seniors to cast their votes on their fit. The first was on Oct. 19 in the Student Resource Building and the Arbor between 11 a.m. and 2 p.m. The second was on Oct. 25 and was held in the same locations. Free snacks were offered at both.

Students who could not make it to either of the voting parties had the option to vote online, according to the committee’s Facebook page.

If TGIF had been chosen, the money would have gone to the Edible Campus Initiative, which aims to reduce food insecurity on campus by growing food and donating it to the A.S. Food Bank.

The A.S. Academic Resource Fund, if picked, would have assisted students with textbook costs and additional study materials. Recipients would have been selected through an application process.

A version of this article appeared on p.3 of the Dec. 7 print edition of the Daily Nexus.