The Daily Nexus
Nexustentialism
It's satire, stupid.
All Final Exams Canceled Due to Power Outage
December 6, 2017 at 4:20 am by Vianna Mabanag 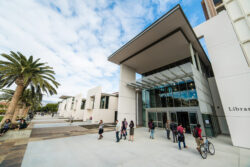 UCSB officials have announced that all finals are to be canceled due to ongoing power and air quality concerns caused by the Thomas fire.

While the story is still currently developing, official reports show that all databases within the UCSB system crashed during Monday night’s power outage. Among the data wiped out were all blueprints for every final exam for every college within the university.

“Two nights ago I just lit a couch on fire, and today I just found out I don’t have to take my finals,” sixth-year Connor LeMcintosh said. “If this really is The Purge then I’m not complaining. Buuuut, I also really need to fucking graduate already.”

“If this really is The Purge then I’m not complaining. Buuuut, I also really need to fucking graduate already.”

LeMcintosh’s statement follows several reports of an amplified broadcast of the soundtrack to “The Purge” in addition to various pieces of furniture, and a dumpster, having been lit on fire during Monday night’s power outage.

No word yet on who burned the dumpster or who attempted to start a purge, but everyone seems to think it is likely that one kid who is really stressed out about his chem final. As of now, UCSB staff are currently brainstorming final exam alternatives. One option being considered is  the classic test of Are You Really a UCSB Student or Are You Just Good Looking? which simply requires students to verify their enrollment in the university to receive an A in any class.

Vianna Mabanag is a second-year English major who really wishes this story wasn’t fake news. Can someone take one for the team and actually make this happen? Thanks.

Nope, we still have to take our finals. Just got out of mine actually.

No, but nice try! Anyone know who the student was that burned a dumpster and furniture? I would love to turn him in and get the reward being offered.

Has the Daily Nexus always been satirical? This is a bit ridiculous to even joke about :)

Are you serious? Why did you think this was ok, Nexus? People are genuinely looking for answers and are scared and stressed and this is absolutely not okay. This creates rumors and causes confusion and more anxiety. Some people won’t read all the way til the end to find out that your very serious title is “fake news”. Please delete this article and try helping your student body in an actually productive way.

Not funny! We have a kid from Illinois going to UCSB – NOT FUNNY! Get a life!

Poor choice of topic. This is not a time to be writing satire, considering that some of us have actual friends and relatives deeply impacted by this. It’s not a joke. I’m all for humor, but this is taking advantage of people’s confusion and anxiety.

U are playing with people’s feelings, not cool, do me a favor and get a life