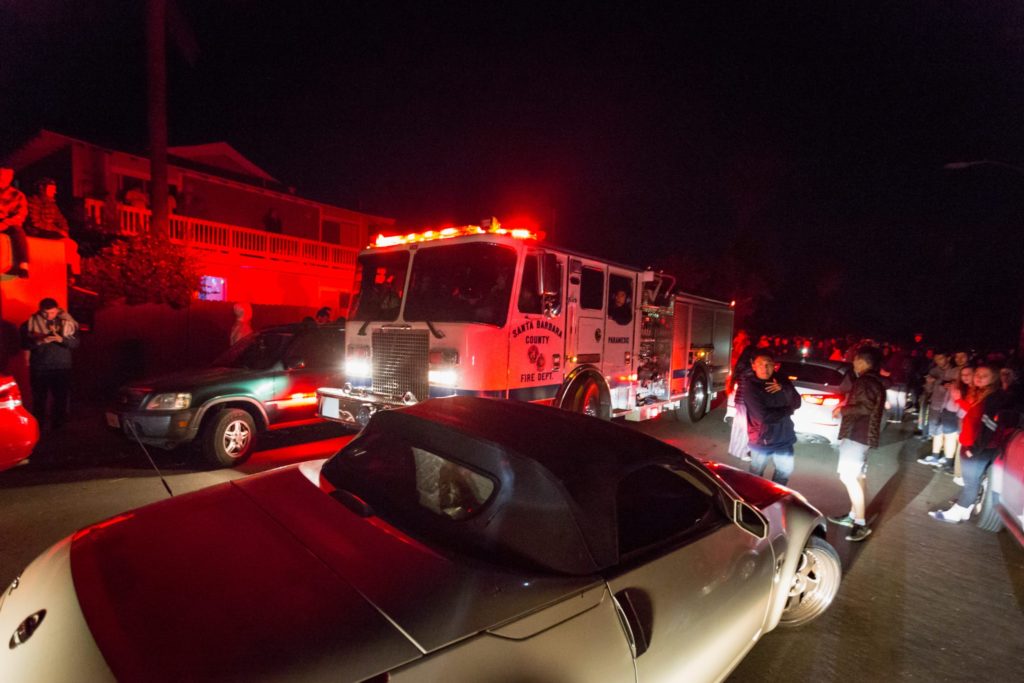 UC Santa Barbara students and local officials are condemning the illegal lighting of fireworks and burning of furniture in Isla Vista during a hours-long power blackout Tuesday night.

I.V. and the UC Santa Barbara campus lost power late Monday evening as a result of the Thomas Fire burning in Ventura County, and UCSB will convert its gym into an emergency evacuation center to accept up to 200 evacuees.

Thousands of I.V. residents rushed onto Del Playa Drive in response to the power outage while blasting music, setting off small fireworks and burning two couches, a mattress, one chair and a dumpster.

The I.V. Community Services District Board of Directors stressed that Isla Vistans are entitled to a safe environment.

“As community members, we are all responsible for co-producing a safer Isla Vista,” Ethan Bertrand, I.V. CSD president, said in the statement.

Batsheva Stoll, a third-year history of public policy major and the executive vice president of local affairs, also released a statement on Facebook regarding the illegal activity, emphasizing that I.V.must stand together instead of damaging property.

“Not only does this behavior make people feel unsafe in their own homes, but it also makes I.V. look like a community that turns into chaos during extreme conditions,” the statement read. 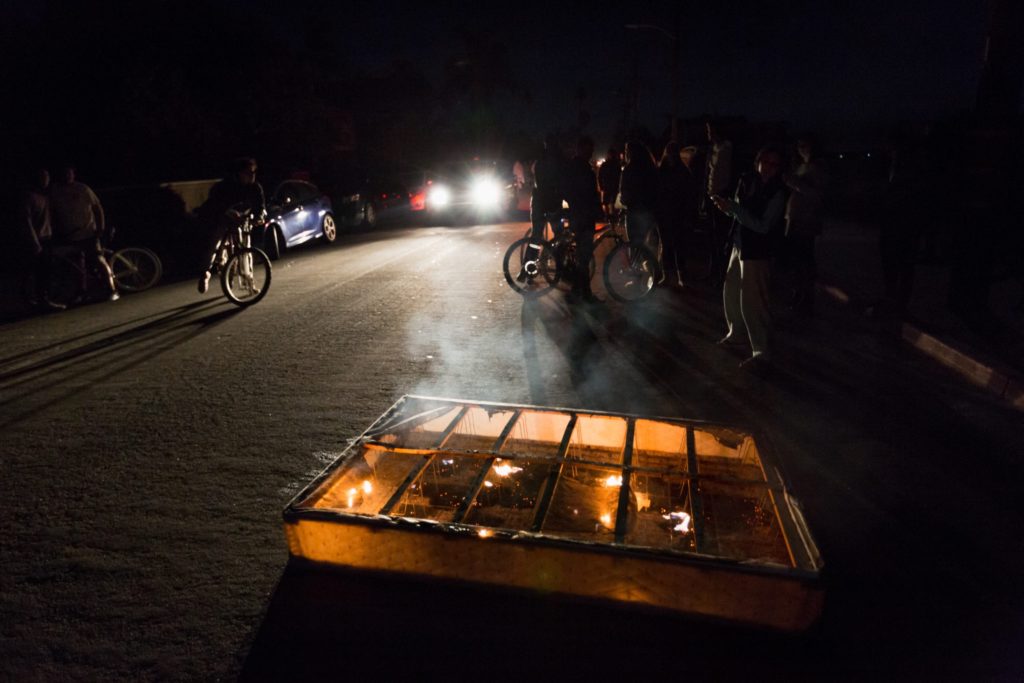 One mattress was also set on fire on the 6700 block of Del Playa Drive. McLane Brown / Daily Nexus

“Fortunately, no one was hurt, but the series of events diverted resources away from other important calls for service,” she said in the statement.

Fireworks were launched over the ocean and set off at intersections in I.V.’s main residential areas, according to Hoover.

“Our first responders need to focus on evacuating those in the direct path of the fire and not responding to unruly activity in Isla Vista,” she wrote in a statement.

Andi Brooker, a second-year political science and communication double major, saw hundreds of people on Del Playa Monday night. When the lights went out, Brooker said her first thought was, “Oh crap, did I forget to pay the electricity again?!”

She decided to walk to Del Playa Drive with her housemates and saw people walking around the street holding flashlights, strobe lights and even lightsabers. She said fireworks were shooting into the sky above the neighborhood.

“I think the whole thing was absolutely hilarious; the fires are really tragic and awful, of course, but thinking ‘glass half full,’ I think the blackout gave everyone a good study break,” she said in an email.

“Fifty years from now, we’ll all be able to remember that one night dead week became literal dead week.”

As a neighbor and an alumnus of UCSB I would prefer to be proud of the student body and would hope that all of you volunteer to do something to help out after this disaster. There will be plenty of people made homeless by these fires who could use a helping hand at local disaster relief centers. At least, do no harm and consider the impact of what you do before you do it. Thank you, Susan Braden, MA Spanish 2002

? How do you burn a dumpster – aren’t they made of metal? Also, Joan Hartman… “Our first responders need to focus on evacuating those in the direct path of the fire and not responding to unruly activity in Isla Vista,” is she suggesting that the IVFP is going to drive down to Ventura? Sounds like a blast – I wish I was still in IV.

They were lighting things on fire, you really think that’s not dangerous? That could lead to another fire or people getting hurt. You can’t neglect one emergency for another, which is why there are first responders/fire fighters that stay behind. Lastly, you can light a garbage bin on fire byighting the contents of it inside on fire. It’s sad that you think these are just unruly kids having fun, they’re adults.

50 years ago there were regular bonfires and motorcycle riding *on the beach*. And hordes of naked hippies on LSD throwing Molotov cocktails and beating Sheriff’s cars down to 2′ tall with rocks, then setting them on fire. 30 years ago this blackout would have resulted in 30 burned couches, etc. 0 burned furniture elements would sure have been nice this time, but a handful ain’t bad compared to the chaos of the pass. The only constant throughout time: older people who did far, far worse things when they were young and in IV criticize the current IV residents for… Read more »

This is exactly why an education at UCSB will be second place and have a reputation as a place to party. There are people barely escaping with their lives and losing their homes while these losers are committing ridiculous and dangerous acts. I wanted to think that UCSB was better than this but I am wrong. The campus hasn’t condemned the behavior of its students but the political leaders have admonished them. Why doen’t UCSB do their job and take responsibility for the behavior of their students? You have pictures, videos, and the students know who the losers are, yet… Read more »

We’re all shocked, shocked to see 20 something’s having a good time. IV kids should know that fun is only for Republican senatorial candidates undressing 14 year olds, Republican presidents grabbing pussy, and skipping out on their Vietnam service due to bone spurs and cocaine snorting.

for a reallyy good time head down to a burn unit and see what it is like. Better yet, light yourself up.

1) Monday night
2) Someone needs to start editing these articles.

Yeah right, Hularious. So much for UCSB which just sank to a new low.

Cops never responded to the blackout in IV. No attention was diverted from the fires and it only takes one person out of 30,000 to set off a firework or start a fire. UCSB students are not represented by the actions of a few.