The Daily Nexus
Sports
The Secret Life of Jerseys: An Alum’s Quest to Rep UCSB Men’s Soccer
November 30, 2017 at 5:03 am by Sean White 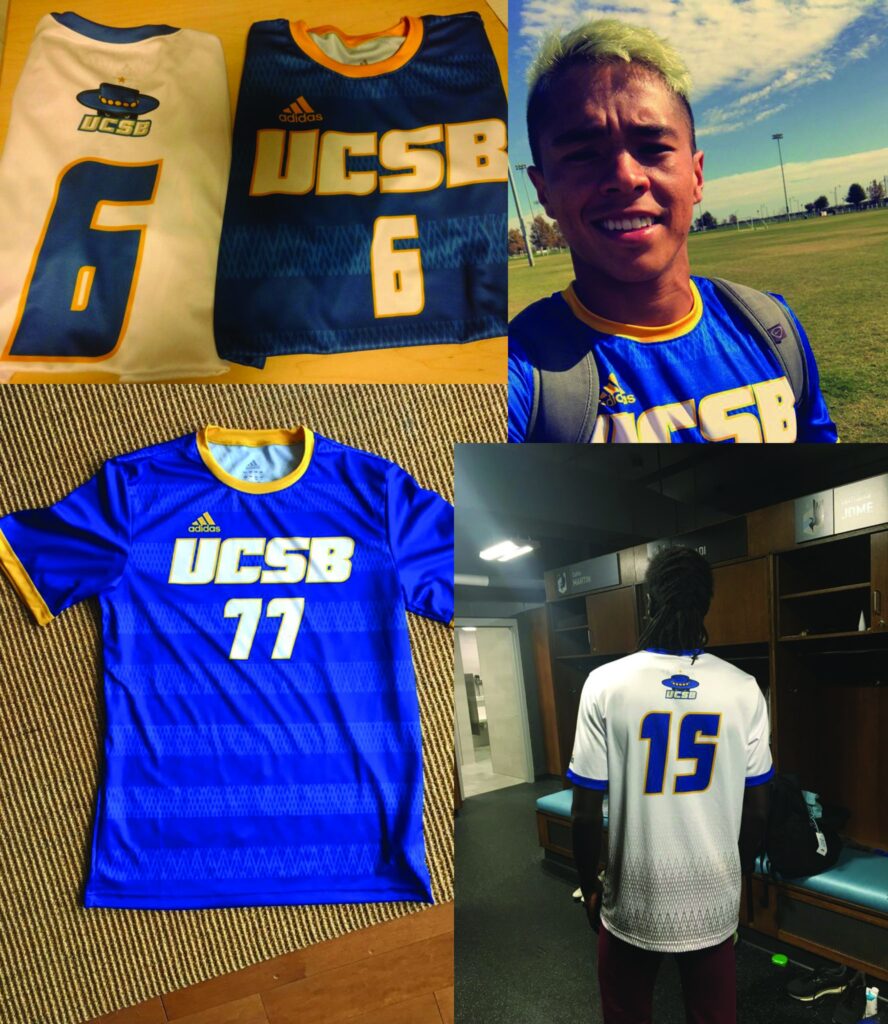 “Once a Gaucho, always a Gaucho.”

The mantra embodies what many generations of past and current students appreciate about their beachside experience while at UCSB.

Somewhere within that experience is the part of you that’s a UCSB sports fan. Even for the self-acclaimed non-sports fan, an interest in what collegiate sports brings to the table is a point of our student lives that we’ve all experienced.

Across a multitude of generations, this phase is one that is lifelong. In the case of Gaucho alumnus Mike Heid, class of 1995 graduate, his affinity for UCSB men’s soccer has formed a community between both current and incoming Gaucho sports fans and veterans that have been around for decades.

Heid is the creator of gauchosoccer.com, a blog with ties to nearly any and all things related to UCSB men’s soccer.

According to the website’s archives tab, information on the site dates back as early as Sept. 2016.

Insight on current and former Gauchos that are now playing at either the MLS or international pro levels, the program’s 2018 recruiting class and even the formations and plays the team ran while on the field are all available on Heid’s site.

Although intriguing, the website’s most striking piece of content is Heid’s self-titled “How I Procured My Own UCSB Soccer Jersey: A Case Study in Citizen Journalism.”

With little to lose as an avid UCSB men’s soccer fan looking to further support his alum, Heid took his right to citizen journalism beyond the keyboard and into public records to satisfy his need for a conclusion.

Despite being home to 20 Division-I sports programs, UCSB is not necessarily a sports powerhouse.

With that said, the search for a team jersey in any sport is a likely afterthought for many, but not all.

While browsing ucsbgauchos.com, one would likely come across the athletics department’s “UCSB shop” tab and would eventually find their way onto its Gauchos Shop.
Categorized under the site’s “men’s jersey” tab, the only available jerseys for purchase are for baseball and men’s basketball.

Published on Nov. 4, Heid’s article chronicles his search to purchase a UCSB men’s soccer jersey, a seven-month process that began in April of this year.

Trailblazing Heid’s investigation was a question about the availability of purchasing a men’s soccer jersey on the UCSB sub-Reddit a while back, influencing him to exhaust all of his possible resources in hopes of finding an answer.

“For years, I’ve wanted to buy UCSB soccer jerseys. Every year I go to the Gaucho shop and jersey section, and every year it’s the same stuff. There was one year when they did sell the actual jersey, which I still have, but [nothing else since].”

One of his first steps was reaching out to staff within the UCSB athletics department.

His exchange of emails primarily took place with Richard Loza, director of Marketing, Branding and Sales and Bryan Cornet, the department’s assistant athletics director of Sales and External Relations.

In an email sent to Cornet, Heid even offered to put up his own money for the UCSB athletics department to use in hopes of them buying the jerseys and putting them up for sale.

Due to university regulations, the school was unable to accept the offer. But it wasn’t this fact alone that prompted Heid to continue his investigation.

Rather, it was the estimated costs to produce the jerseys that seemed most contradictory. With Nike as the university’s sponsor at the time, prior to changing to Adidas, Heid was informed that the athletics department ordered “custom” jerseys that cost around $180 a piece.

For any sports fan, the only merchandise that likely hits that market price or higher is an authentic NBA Hardwood Classics jersey, a pair of retro Michael Jordan sneakers or some other form of ultra-vintage memorabilia.

As expected, the $180 price tag suggested definitely caught Heid off guard, considering his history as a consumer of both authentic and replica soccer jerseys.

The price, paired with dwindling communication with the athletics department, led to Heid filing a public records request to verify the information he had been given about the production of the jerseys.

His request was to receive information about the men’s soccer program’s purchases from the past three years, in addition to the contract UCSB Athletics had with Nike.

Once his request was fulfilled and the invoices were delivered, the claim that the jerseys cost $180 was quickly disproven as UCSB was actually paying $30-40 for each jersey, which was a discounted cost nearly half the retail price.

Considering UCSB’s switch from Nike to Adidas, Heid ended up filing another public records request regarding the team’s costs for jerseys by the new sponsor.

From May 31 throughout August, Heid was left empty-handed with no records as he was told that there were no invoices or receipts for jerseys under the new partnership.

“I made two separate requests. For my second request, I had to do about 10 follow-ups,” he said. “I don’t think Athletics was necessarily caught off guard that I was up to something and maybe verifying what they had told me. Maybe they were caught off guard with what I did with the info. But I also didn’t want the whole thing to turn adversarial. I was a little afraid that I would ostracize myself from the process.”

It wasn’t until Aug. 29 when Heid received order confirmation documents for both the team’s home and away jerseys. But the documentation only went so far, as Heid ended up reaching out to Adidas and eventually was put in touch with a retail vendor.

Communication with Adidas was the peak of Heid’s investigation. Similar to the Nike partnership, UCSB’s new deal with Adidas also consisted of jersey prices being within the $40 range and served as the deciding factor for him purchasing a wholesale amount of blue and white jerseys on Sept. 21. He received his order on Nov. 3.

With the promise that he was willing to donate to UCSB, he bought a total of 64 authentic UCSB men’s soccer jerseys, spending a total amount of $2,958. 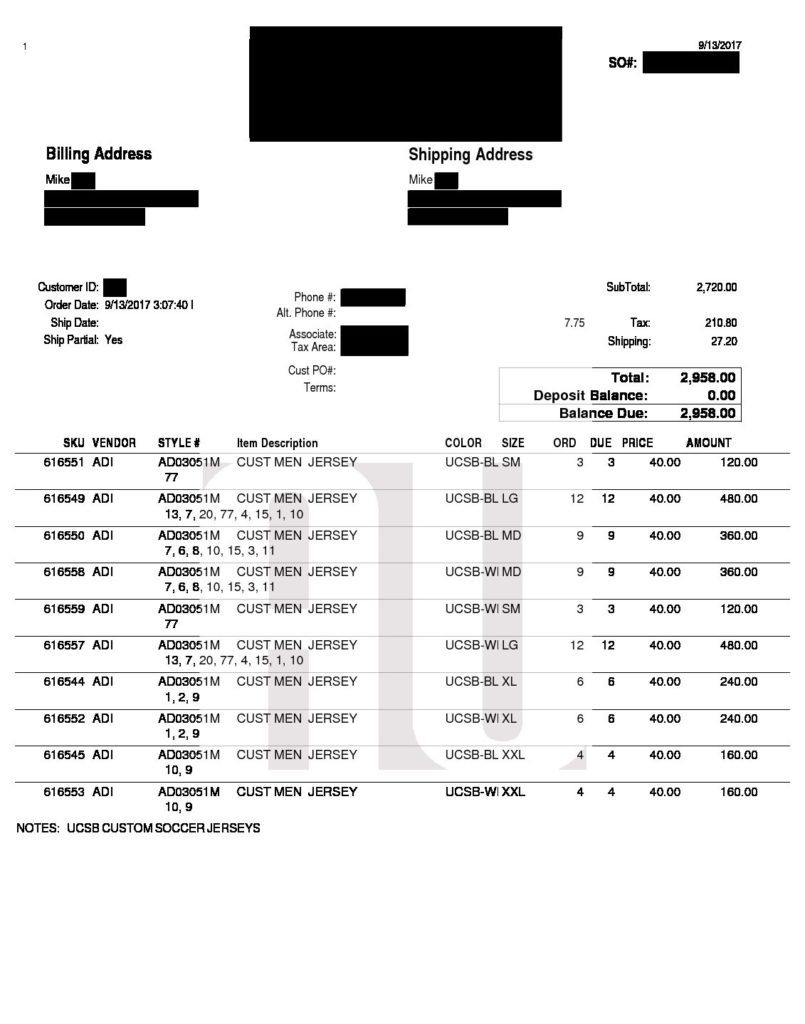 With UCSB Athletics uninterested in selling the jerseys and Heid’s cautiousness for trademark violations, he ended up giving them away to former players and fans that held UCSB soccer dear to their hearts similar to him.

Although Heid was able to confirm his skepticism about the production costs of the jersey, his agenda wasn’t to one up the athletics department and prove them wrong.

Instead, the former Gaucho is one of many that truly love the UCSB men’s soccer program and created an investigation that was dedicated to further connecting the team to its supporters.

“It’s not just about athletics making money from [the jerseys],” Heid said. “It’s also about the fans getting what they want and the program getting more visibility. That’s all just a part of the general [goal] to spread goodwill.

“Even though it can’t always be quantified, I think these benefits made it seem like it was the thing to do.”

The use of the Public Records Act sounds daunting, but Heid’s purpose of using it went beyond the investigation and had a focus to illustrate the effectiveness of citizen journalism.

“I generally wanted and still want for the end result to be that Athletics sees that there is some value in [making the jerseys] and pursuing it,” Heid said. “I haven’t heard from anyone from Athletics and I have not reached out to them again. I plan on maybe doing so eventually, but I first want to see how this plays its way out.”

At the moment, the result is the same — no jerseys for sale.

While the name “UCSB” remains on the jerseys, Heid’s investigation is more valuable than just the desire to wear the printed numbers and letters.

His commitment was a testament directed toward uplifting the UCSB sports community.

As one of the alums who received two of these amazing jerseys I put it out to UCSB marketing. What say you?? Thank you Nexus for running this story. I am surprised there was no comments from marketing. My guess they did not want to comment. UCSB soccer jersey would be a smart business move and many students and alums would love to buy them! Heck the bookstore should look into this! Where is the vision? Can someone with a heartbeat at UCSB athletics- take and run with this? My guess is no! Bravo to Mike! I will wear my… Read more »

well said, Reza. And well done, Mike! This could catalyze more revenue to UCSB Athletics and more exposure to Gaucho soccer. Plus, the most passionate Gaucholocos could have an opportunity to proudly wear their true colors.

I would buy at least one of those jerseys. The blue for sure and likely the white one too. For $40, they’re a steal, but I’d happily pay a retail price of $80, more with customization.

Fantastic article! Extremely well written and I appreciate how it made clear Mike’s intention not to bash the UCSB sports department but to highlight his passion for UCSB soccer and commitment to get what he wanted. While the author and Mike did a good job of not being directly critical, they just let the facts speak for themselves, it is absolutely embarrassing to UCSB athletics. They got caught outright lying about the price and their apathy was laid bare.

Not sure what to say other than, worst college marketing department ever!