The Daily Nexus
Opinion
Argument in the Office: Should Gauchos be Smoking Big Doinks?
November 30, 2017 at 4:28 pm by Laurel Rinehart and Ali Abouesh 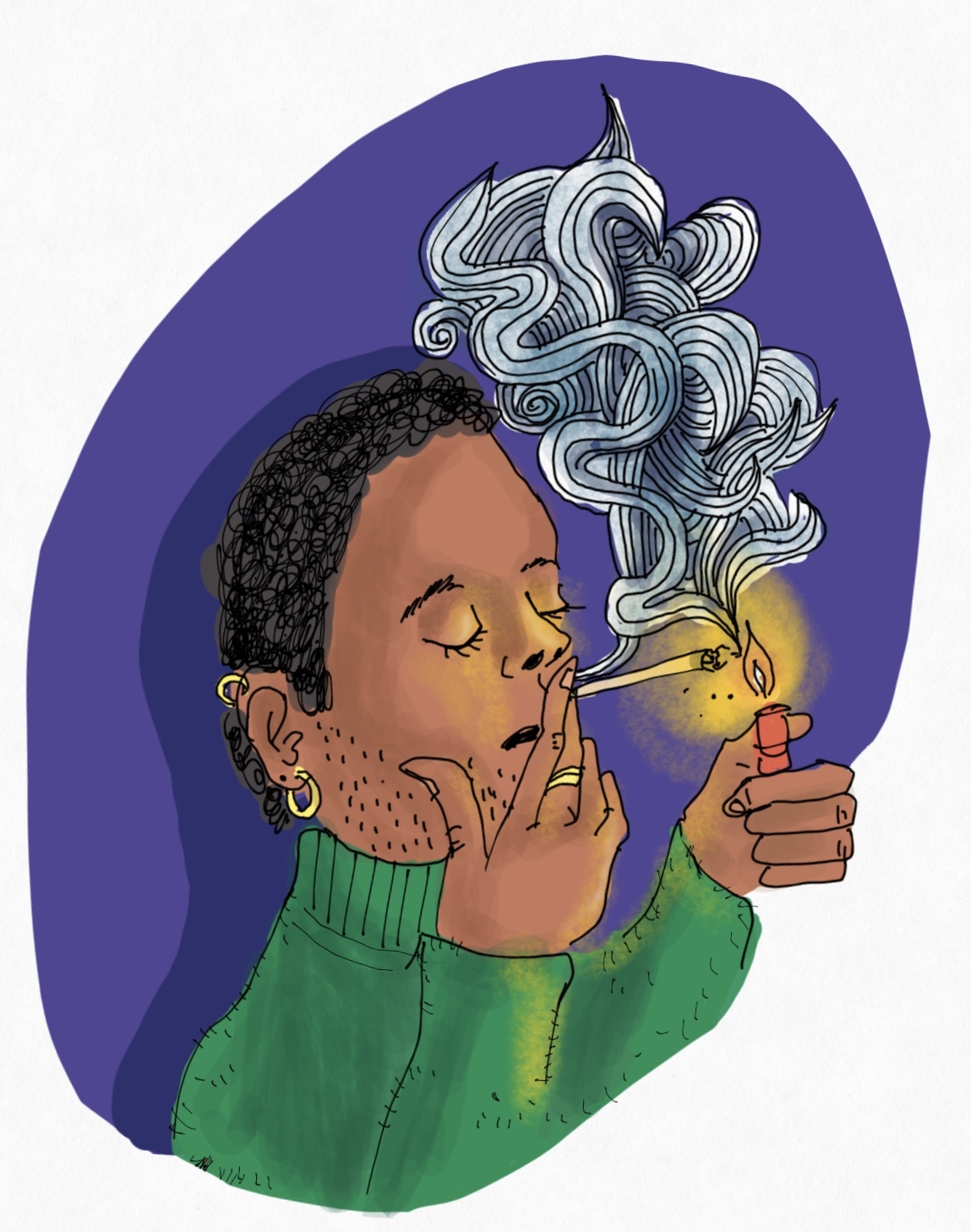 Marijuana is just as much a hallmark of the UCSB experience as Freebird’s, surfing and bike accidents. As a beach town with a laid-back surfer vibe and beautiful weather conducive to outdoor activities, Isla Vista provides the perfect backdrop for a thriving stoner culture. Smoking provides the basis for many social rituals that UCSB students would consider memorable facets of college life, from nervously blowing smoke out the window of your freshman dorm room with your new friends to lighting up a bong with housemates in your I.V. apartment as an upperclassman.

Weed brings Gauchos together in a way that few other things can. If you meet a potential friend in a class or dorm hall, for example, inviting them to a smoke sesh is a designated way to transition your connection from acquaintances to buddies with a shared experience. There are recognized scripts and etiquette rules around smoking weed that make it an easy social field to navigate, where one is not constantly worried about doing or saying the right thing. At UCSB specifically, indoor spaces like privately rented apartments and outdoor spaces like the beach provide the ideal environment for stress-free seshing.

For UCSB students, an apartment with a tapestry on the wall and a bong on the coffee table is the symbolic equivalent of a house with a trimmed lawn and white picket fence.

In addition to its cultural significance, weed provides a relatively safe avenue for students to engage in “rebellion” as youth inevitably will in some form or another. The social contexts in which Gauchos blaze up together are relatively safe, mellow and welcoming. While alcohol is also a huge part of social life at UCSB, the parties where it is consumed are often loud and crowded, with fighting and sexual violence occurring all too frequently. I’m not saying that alcohol is the sole cause of these negative events, but there definitely is a correlation between them. Students coming together for a smoke sesh are far less likely to encounter dangerous or compromising situations than students heading out to a party on DP.

The issue of negative health effects always looms over the head of any stoner attempting to sway the masses, and I’m not trying to deny that these effects exist. Reduced motivation and productivity, cognitive handicaps and potential long-term damage (though research on the latter is still mostly inconclusive) are all valid concerns.

However, a comparison of costs and benefits reveals that these risks are relatively minor in the grand scheme of things. In my opinion, the new friendships and social rituals that weed culture facilitates at UCSB outweigh the potential dangers. Severe damage occurs not from smoking weed, but from smoking weed excessively to the point where it gets in the way of academics and other important pursuits. As long as students use it as a social activity to relax after fulfilling their responsibilities for the day, there is no cause for alarm.

Gauchos are situated in a unique point in life that is fully conducive to reaping the benefits of smoking weed. Adult responsibilities have not fully set in, we are surrounded by peers with whom we can engage in social smoking and we attend school in a beautiful, laid-back beach town. For UCSB students, an apartment with a tapestry on the wall and a bong on the coffee table is the symbolic equivalent of a house with a trimmed lawn and white picket fence. I would urge any student who is apprehensive of the dangers of smoking to cast those doubts aside and grab some friends, spark a joint and enjoy the exceptional stoner culture that I.V. has to offer.

Marijuana is a pervasive part of the culture of Isla Vista, and it certainly has brought many positive experiences for UCSB students. Smoking a bowl after a hard midterm or a casual smoke sesh by the beach can be good destressors when done in moderation. That being said, there are certain problems that a culture like that can bring, and with the legalization of recreational marijuana on the horizon, these problems could end up becoming worse.

If you play hard, you have to work hard, and it’s more difficult to work hard if you’re smoking every day.

The old stereotype of stoners being more prone to laziness while high does have some truth behind it. For every person who can smoke and do their work, there are three others who get high and put off their essays, studying and responsibilities. Being students at one of the top research universities in the country, we have a duty to maintain our reputation, and people who show up to class high or don’t do their schoolwork make us all look bad and ultimately lower the value of our degrees. If you play hard, you have to work hard, and it’s more difficult to work hard if you’re smoking every day.

The next issue directly relates to the everyday consumption of marijuana. Most people cannot or refuse to drink alcohol every single day of the week, but for some reason, people don’t mind smoking every day. This is a moderation problem, which affects all areas of life, not just academics. I’ve heard of so many people who are avidly against driving drunk, but driving high is completely fine to them. Obviously this is hearsay evidence, but still, there’s definitely not the same stigma around driving high as there is around driving drunk. Both are extremely dangerous and can put others at risk. If you’re high every day, there will come a day when you have to drive somewhere, and since the stigma isn’t the same. you’re more likely to shrug it off and do so.

Most people cannot or refuse to drink alcohol every single day of the week, but for some reason, people don’t mind smoking every day.

The most important thing to consider about I.V.’s weed culture is that the very nature of the drug is beginning to change dramatically. Strains are getting more potent. Edibles are no longer hastily made by your stoner roommate but instead are professionally made into gummy bears, and rice krispy treats contain far more THC than they used to. “Dabbing,” or concentrated butane hash oil, has now become mainstream and is even available to use in nifty little vape pens that you occasionally see in Davidson during a late-night study grind. Weed is getting more potent, and it’s spreading everywhere. It is no longer confined to a late-night bong sesh in your apartment but can be consumed in the library, while casually walking the street in I.V. or while cruising through the Arbor.

Ultimately, if people want to light up, that’s their own prerogative and it’s their own life. The problems that are associated with marijuana all stem from a lack of moderate consumption, and if you’re capable of doing so then by all means go for it. However, we do have responsibilities as students of UCSB to be the best we can be academically. If it’s getting in the way of your grades, it’s time for a self-check on what’s important to you. The motto that we live by here is work hard, play hard, and you have to do one to earn the other.

Ali Abouesh hopes that people are careful with their doobies.

I may not be smoking big doinks but I sure am doing them.

It is so sad that students feel they need to be stoned to be happy.