Congressman Salud Carbajal told UC Santa Barbara students on Monday that a Republican tax plan could make it more difficult for students to pursue an education, opposing a plan that would lower tax deductibles for student loan interest.

Students are currently eligible to receive up to $2,500 a year on their student loans if their families’ income is less than $80,000. This new plan aims to repeal this deductible.

“This is a proposal that quite simply gives 80 percent of the tax benefit to the top 1 percent of this country,” Carbajal said. “It’s the biggest gift to the wealthiest in our country.” 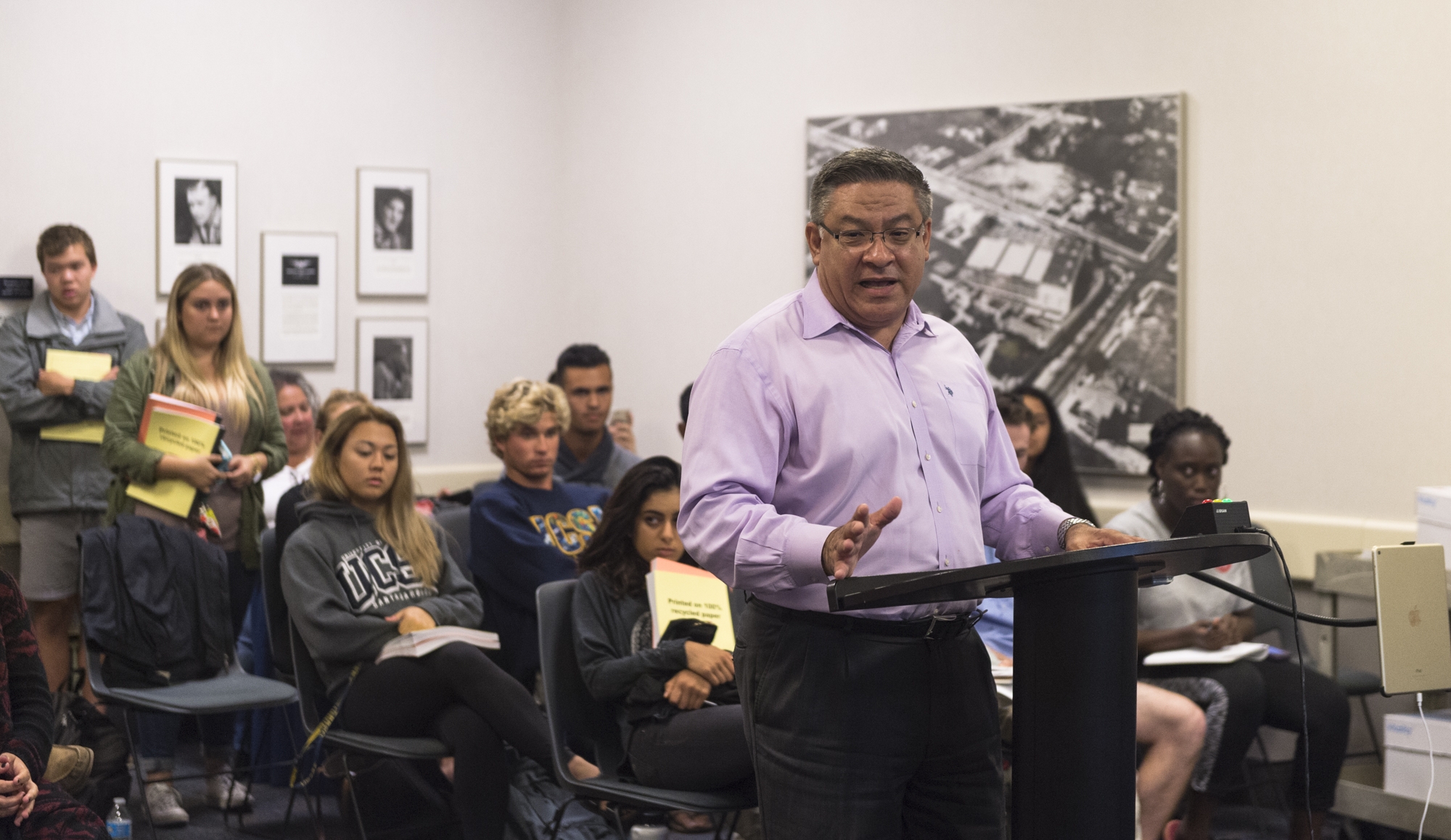 U.S. Representative Salud Carbajal voted against the Republican tax bill he said could make it more difficult for students to pursue an education. Nexus File Photo

However, the bill does not tax scholarships. If universities were to rename tuition waivers as scholarships, graduate students may avoid paying these income taxes.

Kristin Hsu, A.S. executive vice president of statewide affairs, held a panel through her office on Monday, Nov. 27, in the UCSB Graduate Student Association (GSA) Lounge. Approximately 60 students gathered to express their dissent and support of the bill.

Bruce Kendall, associate dean of the UCSB graduate division, said the UCSB administration may find a way to raise graduate students’ salaries if the bill passes through the Senate — which could result in fewer admitted students.

The panelists were worried that a less diverse group of students would receive the opportunity to pursue postsecondary education if the bill passed.

“Attacking funding changes who can go to graduate school,” Meg Undén, UC Student Workers Union (UAW 2865) chair said. “We need to have a variety of people entering academia, not just the top one percent.”

The House bill would also remove the Lifetime Learning Credit, a tax credit that provides up to $2,000 for education expenses, and replace it with the American Opportunity Credit.

Jonathan Abboud, Santa Barbara City College trustee, said he was present on the panel to address community college students’ concerns. In response to a question about the Republicans’ motives behind the bill, he said Republicans are passing this bill because they “do not care about you.”

“They don’t want to make it easier for someone like you to go to graduate school,” he said.

Another student was dissatisfied with Carbajal’s efforts to amend the tax plan, saying he failed to work with Republicans on compromises and fixes for the bill. The student asked Carbajal why he has not delivered on his campaign promise of being bipartisan.

Carbajal responded that there was no opportunity for a bipartisan effort because the Republican leadership did not allow collaboration.

“We know the Congressman appreciates the critical importance of our graduate student population to the research, teaching and service missions of UC Santa Barbara,” he said in an email.

Around 2,000 graduate students at UC Santa Barbara that earn tuition waivers each year as a benefit of employment would be taxed under this plan, Dixon said.

According to the American Council on Education, 145,000 graduate students in the United States currently receive waivers for teaching or conducting research.

“This bill would heavily affect graduate students at UCSB and those involved in GSA. Almost all grads in GSA are Ph.D. students who receive tuition waivers,” Adamson said in an email.

The bill must still pass through the U.S. Senate before it can be signed by President Donald Trump.

This Tuesday, Nov 28, the Senate Budget Committee voted 12-11 along party lines to pass the tax bill, and it will now move to the Senate floor. The Senate plans to vote on the bill this week.

The Senate released their own version of the bill, which contains differences from the House bill.

The Senate Bill that was released will not tax the graduate tuition waivers. The bill reads that it “preserves additional important elements of the existing individual tax system, including … education relief for graduate students.”

Dixon said he and the Graduate Division believe it is important for students to stay informed on legislation that could affect them.

The Graduate Division has provided students with resources on how to advocate for graduate students, if they would like to express their views.

UCSB students have planned a walk-out in solidarity with graduate students nationwide at Storke Tower on Wednesday, Nov. 29, beginning at 10 a.m. Two faculty members will be speaking.