Every supernova observed so far has been considered the terminal explosion of a star. Moreover, all supernovae with absorption lines in their spectra show those lines decreasing in velocity over time, as the ejecta expand and thin, revealing slower-moving material that was previously hidden. In addition, every supernova that exhibits the absorption lines of hydrogen has one main light-curve peak, or a plateau in luminosity, lasting approximately 100 days before declining.

“This​ ​supernova​ ​breaks everything​ ​we​ ​thought​ ​we​ ​knew​ ​about​ ​how​ ​they​ ​work,” Iair Arcavi, lead author and a NASA Einstein postdoctoral fellow in UC Santa Barbara’s Department of Physics and at LCO, said. “It’s​ ​the​ ​biggest​ puzzle I’ve encountered​ ​in​ ​almost​ ​a​ ​decade​ ​of​ ​studying​ ​stellar​ ​explosions.” 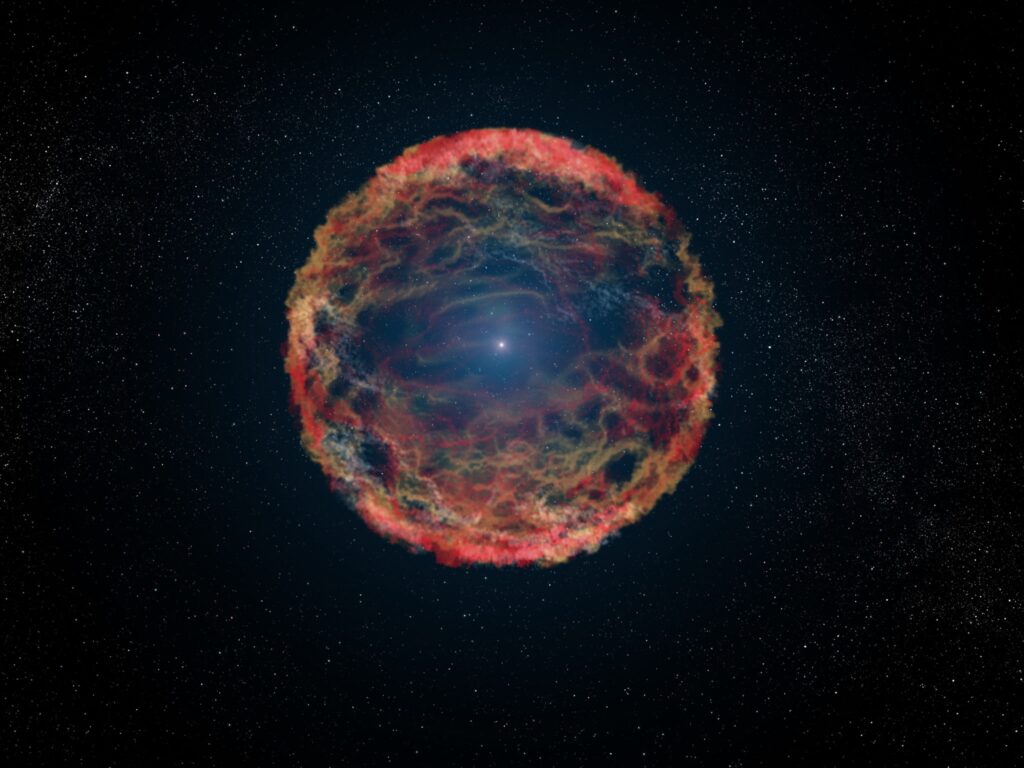 Discovered in Sept. 2014, iPTF14hls, although identical to type II-P supernovae in its spectroscopic features, has several properties never before seen in a supernova. Instead of a 100-day plateau, the light curve of iPTF14hls lasted over 600 days and has at least five distinct peaks during which the luminosity varies by as much as 50 percent.

​“Supernova​ ​iPTF14hls​ ​may​ ​be​ ​the​ ​most massive​ ​stellar​ ​explosion​ ​ever​ ​seen,” co-author Lars Bildsten, director of UCSB’s Kavli Institute for Theoretical Physics, said. “For me, the most remarkable aspect of this supernova was its long duration, something we have never seen before. It certainly puzzled all of us as it just continued shining.”

The progenitor of iPTF14hls probably experienced multiple energetic eruptions over the last decades of its life. Energetic eruptions are expected in stars with initial masses of about 95–130 solar masses. Interactions between the different shells and the supernova ejecta and the shells can produce a variety of luminous long-lived transients with highly structured light curves similar to that of iPTF14hls.

Such pulsational pair-instability supernovae are expected to occur in low-metallicity environments. iPTF14hls
occurred on the outskirts of a low-mass, star-forming galaxy, possibly of low metal content. However, models of stars undergoing the pulsational pair-instability eject most of the hydrogen envelope in the first eruption, whereas for iPTF14hls a few tens of solar masses of hydrogen were retained in the envelope after the 1954 outburst.

iPTF14hls demonstrates that stars in the local universe can undergo very massive eruptions in the decades leading to their collapse and yet, surprisingly, maintain a massive hydrogen-rich envelope for most of this period. Current models of massive star evolution and explosion need to be modified, or a completely new picture needs to be put forward, to account for the energetics of iPTF14hls, its lack of strong interaction signatures and the inferred amount of hydrogen it retains toward the end of its life.