The Daily Nexus
Water Polo
Sixth-Seeded Gauchos Look for Miracle Finish at GCC Championships
November 16, 2017 at 4:50 am by Jorge Mercado 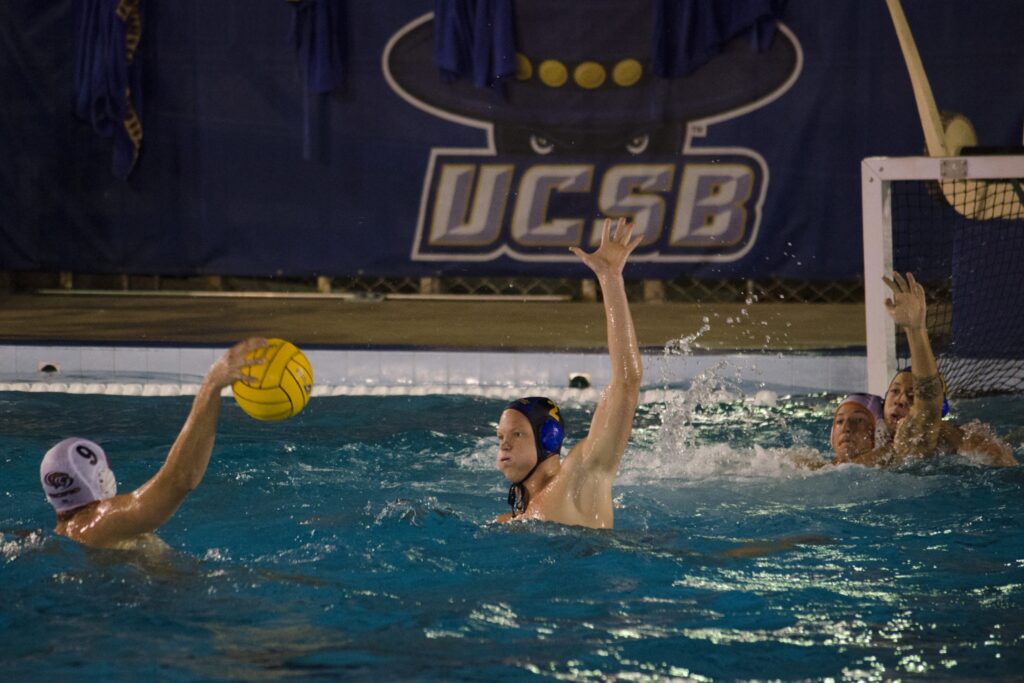 Riding the high of its first conference victory in its season finale, the No. 8 UCSB men’s water polo team will hope to access that same momentum this weekend as it participates in the Golden Coast Conference Championships. The winner will earn an automatic bid to the NCAA Tournament.

Santa Barbara heads into the tournament with just a 10-11 overall record, but its 11-10 overtime victory against Pepperdine last Friday allowed it to finish with a 1-4 conference record and avoid its first no-win conference season since 2014.

Despite that, UCSB still holds the worst record in the GCC and will be the No. 6 seed heading into the Championships, facing No. 3 seed UC Irvine in the first round.

No. 7 UCI currently holds a 13-9 overall mark, 3-2 conference record. The Anteaters are coming off a tough 8-7 loss to Long Beach State last Friday.

With a win, they would have been the recipient of a first-round bye, but instead, they face UCSB, a team they have defeated two of the three times this season.

The two teams first met at the Triton Invitational where the Gauchos outlasted the Anteaters 14-12 in overtime. UC Irvine would win the next two matches by a combined total of four goals, and the last meeting came down to the final possession.

The main point is that these two teams while having a big discrepancy in the record, are actually pretty well-matched.

UCSB certainly has a lot going for it, with its five players earning All-GCC honors being headlined by seniors Reed Cotterill and Shane Hauschild earning first and second team accolades, respectively.

Cotterill, a utility, led UCSB in drawn exclusions with 25 while also adding 18 goals. Hauschild, an attacker, led the team in most offensive categories including goals (33), assists (18), steals (29) and points (51).

Sophomore utility Ivan Gvozdanovic was named an All-GCC Honorable Mention despite missing the final seven contests of the season due to an undisclosed injury. At one point, he was leading the team in goals before being passed up by Hauschild. The Serbian native finished with 24 goals and 10 assists.

In fact, the biggest reason for the Gauchos’ lackluster performance in conference play was the non-availability of Gvozdanovic and junior driver Boris Jovanovic. Both players were headed for career-high seasons, but injuries derailed their season as well as the team as a whole.

However, if Santa Barbara proved anything last Friday, it’s that it still can beat quality teams in this conference thanks to the efforts of players like Hauschild and Cotterill, who will most likely be playing their final matches in a UCSB uniform this weekend.

Even with that, UC Irvine will certainly not be an easy first-round match for any team, especially the sixth-seeded Gauchos.

Irvine is led by utility Lovre Milos, who finished tied for second in the GCC in goals scored with 61. The senior was also the league’s leading assist man with 43.

Milos has had a decorated four years as an Anteater, with at least 60 goals in the past three seasons and a career-high 92 during the 2014-15 season.

Despite redshirting last season, the senior has not missed a beat as the league’s leading point-getter with 104 and has snatched the fourth most steals with 43 swipes.

Along with the senior, the Anteaters are also confident due to the fact they have freshman phenom, Fynn Schuetze. The attacker from Hildesheim, Germany was named the conference’s Co-Newcomer of the Year after a standout 36-goal, 18-assist campaign.

In the cage, senior Matej Matijevic is still one of the best goalkeepers in the league, racking up 278 saves this season, the second-highest total, and the fifth highest save percentage with a .625 mark.
He was also an All-First Team GCC recipient.

Other key notables include seniors Robby Stiefel, who went 52-10 in the sprint battles, and Kyle Trush, an honorable mention, who was second on the team in assists with 20.

While the Gauchos’ struggles have mostly come in the back end due to injuries, the team is certainly still talented enough to pull off a run and try to make the NCAA Tournament for the first time in a long time.
Last season, UCSB was the No. 1 seed in the GCC tournament and was quickly upset, ending its hopes.

This year is the exact opposite. No expectations, no pressure, no anything. Maybe this is what the Gauchos want.

Santa Barbara takes on UC Irvine at 6 p.m. on Friday, Nov. 17, at the Anteater Aquatics Complex, the site for this year’s conference tournament.