Hot off a road win against Northern Arizona, the UCSB women’s basketball team traveled to Santa Clara Tuesday night, where it was handed its first loss of the season.

Injuries were noticeable on one side as for Santa Clara, junior guard Emily Wolph, who leads the team in points per game and had a career-high 27-point game against Cal State Fullerton, was not in the lineup for Tuesday’s match.

On the other side, Santa Barbara welcomed back center Natalia Bruening who did not suit up for the first game due to an ankle sprain as she was in uniform and ready to play.

She only played four minutes and did not register any statistic, but having her back is a welcomed addition. As she starts becoming healthier she can definitely help a bench that mustered only 10 points all night against SC. 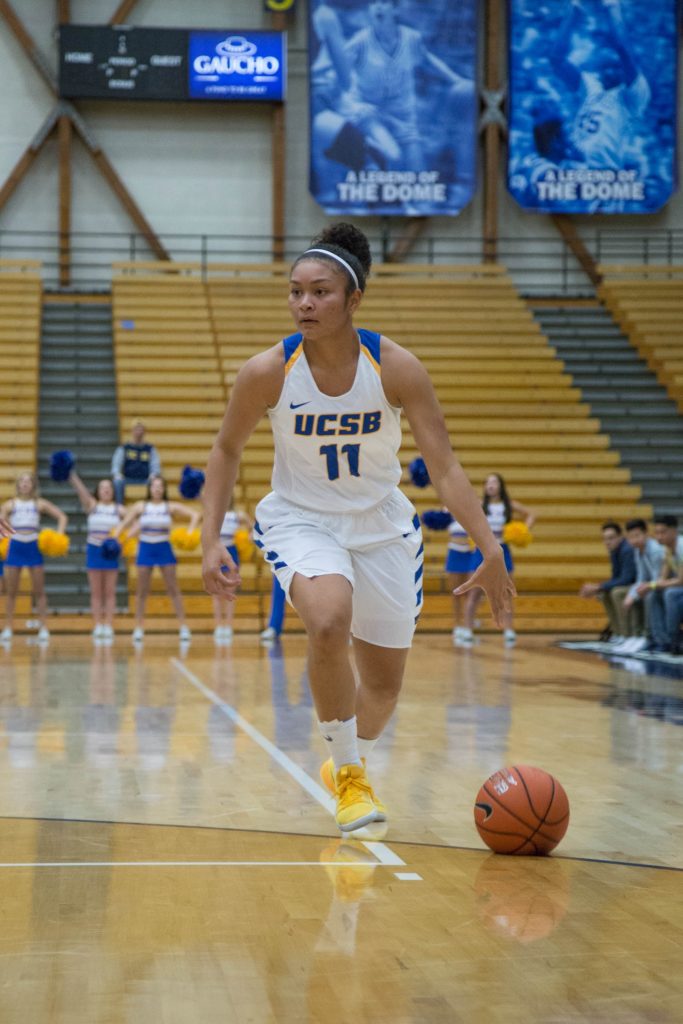 The visiting Gauchos came out steamrolling on offense to begin the match, getting bucket after bucket, and gaining a 10-4 lead halfway through the first quarter.

Freshman guard Sarah Bates, who leads the team in scoring last game against the Lumberjacks, made it rain in the first quarter with two nice three-pointers to give UCSB the edge over the offensively aggressive starters of the home team.

Santa Clara didn’t let themselves fall behind for too long, however, as it chipped away at the deficit and tied it up late in the first, off a pair of free throws by sophomore forward Tamia Braggs.

At the end of the half, it was a slightly skewed score of 37-31, with Santa Clara holding the thin advantage.

Despite the close first half, the Broncos began to gain some separation after halftime when they went on an 8-0 run towards the end of the third. Suddenly, UCSB found themselves down 11 points with 8:18 left in the fourth and would have to gouge their way back if they wanted a shot at winning the game.

The Gauchos continued to have turnover woes, with two turnovers early in the final frame preventing them from gaining any headway.

Powerfully pursuing the challenge of fighting an uphill battle, halfway through the fourth quarter, Santa Barbara began to gallop back into the game, offsetting their scoring struggles with a 9-2 scoring clinic as time dwindled down just under five minutes remaining.

The visiting Gauchos grew electrifyingly aggressive on defense as the quarter went on, with a series of great defensive stands resulting in UCSB taking four charges down the stretch.

Down eight with 2:26 to go, the Gauchos rallied off five straight points to cut the score to 61-64 with just under 36 seconds left thanks to a surge led by yet another Bates three-pointer and topped off with a clutch layup by redshirt Junior guard Sarah Porter.

Shortly after Porter’s layup, things seemed to be going Santa Barbara’s way, as after an intentional foul by the Gauchos, the Broncos junior guard Dru Toleafoa proceeded to miss both free throws giving the visiting team the opportunity to tie the game up in the next possession.

However, the anticipated late-quarter comeback was immediately put to rest when the Gauchos had a calamitous turnover by freshman guard Danae Miller on the inbounds play. UCSB tried to continue playing the foul game but to no avail as its fate was sealed losing its first game of the season, 68-63.

21 Gaucho turnovers had a massive impact on the outcome of the game, as there were too many giveaways late in the game for Santa Barbara to recover. Each mistake proved to be more costly than the last, as Santa Clara scored 19 points off those turnovers.

Redshirt senior forward Drew Edelman had another consistent high scoring game. Edelman was the lone Gaucho to score in double figures and led all scorers with 23 points, and grabbed a team-leading six rebounds.

Though the Broncos’ leading scorer Wolph was inactive for the game they still had weapons to rely upon as senior guard Kyla Martin and Toleafoa both had double-digit nights with 17 points each to overshadow Santa Barbara and Edelman’s solid offensive night to come away with their first win of the new campaign.

UCSB and Santa Clara both had five wins apiece in the history of these two programs, but it is the Broncos now who holds the all-time lead thus far, 6-5.

The Gauchos will be back on the court at 7 pm this Friday, Nov. 17 as they faceoff against Seattle University in the Thunderdome for their first home game of the season.