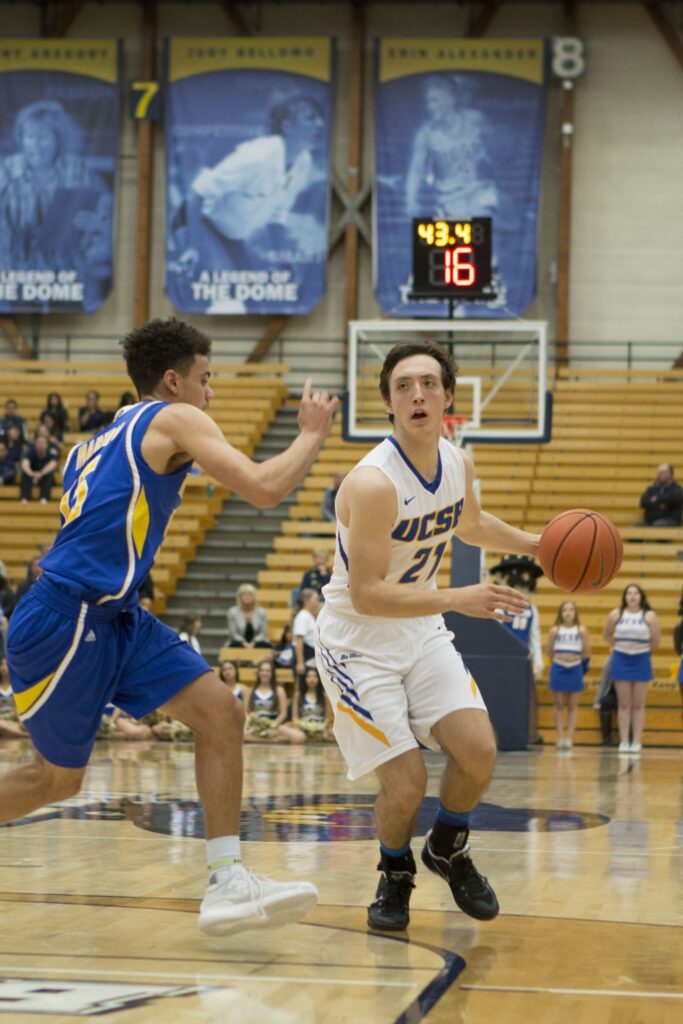 A new era of UCSB men’s basketball tipped off perfectly on Saturday, as the Gauchos blew out North Dakota State 85-66 in their first game of the year.

It was the first official win as a Gaucho for new Head Coach Joe Pasternack, whose animated presence on the sideline throughout the game was emblematic of the energy that he inspires within the team.

The hustle side of the equation was made way easier by an extraordinary offensive performance from sophomore guard Max Heidegger, who tallied a career-high 33 points on 10-19 shooting from the field, causing both the crowd and his teammates to erupt with every shot.

The game started pretty evenly, with both teams trading buckets for the first 15 minutes of the half. To start off, senior forward Leland King II (23 points, 9 rebounds) and senior guard Gabe Vincent (7 points, 8 assists) provided a steady veteran presence for the somewhat jittery Gauchos, scoring or assisting the first nine points of the game.

It was a heartwarming sight for the Gaucho faithful to see Vincent knock down the first three of the game, and for him to set his career high in assists in his first real game back from last year’s season ending knee injury.

For NDSU, much of the offensive load was put on senior Paul Miller from the jump. The guard managed to muster up 18 points, five rebounds, and six assists but was hounded by the UCSB defense the entire game and was not really able to get in his comfort zone at any point.

On the other hand, leading UCSB was Heidegger, who established his presence in the first half with 17 points, making all of his four field goals from beyond the arc while going 5-5 from the free-throw line.

At one point, following four straight points by King II, Heidegger knocked down back-to-back three pointers to put UCSB up by ten with two minutes to go.

“I wasn’t too worried about my shot, even when I missed my first three,” Heidegger said. “Because I had to fill in for Marcus [Jackson], I was just trying to get the offense going and let the scoring come to me”.

He ended with eight three pointers in the game, tied for second most in program history and one shy of the record nine three pointers that former Gaucho Michael Bryson made against Seattle in 2015.

The Gauchos went into halftime up by nine, 40-31, which was mostly the result of a stifling switch heavy defense which forced the Bison into tough shots and passes the whole half.

For the second half, UCSB remained consistent, as both Heidegger and King II continued to call their own numbers and drained shot after shot giving the Gauchos a 15 point lead five minutes in.

A major factor for this second half run that both Coach Pasternack and Gabe Vincent pointed out postgame was “winning the rebound war”. In the second half, the Bison only got one offensive rebound, completely cutting out any second chance opportunities.

The fight and energy that senior forward Jalen Canty brought down to the block definitely had something to do with that.

The Oakland native did an outstanding job of leveraging his strength against the often taller forwards of NDSU. He was a factor both offensively and defensively, scoring 13 points on 4-8 shooting along with three “And-1” continuation calls, and on the defensive end he had the second most rebounds on the team (four defensive and three offensive).

Later in the second half, Canty’s ability to score and draw fouls in the post was key to stopping a Bison run which cut the lead to nine at 70-61 following two made free-throws by the Bisons’ Miller.

Overall, the season opener went down perfectly. Hot shooting from Heidegger and King II kept the game exciting for the crowd, while the gritty Gaucho defense secured the win. The UCSB community is desperate for a great team to rally around, and if this team continues to keep up the defensive intensity, commit to ball movement, fight for every rebound and most importantly “honor the process” as Pasternack would say, then the outlook for UCSB’s season could be promising.