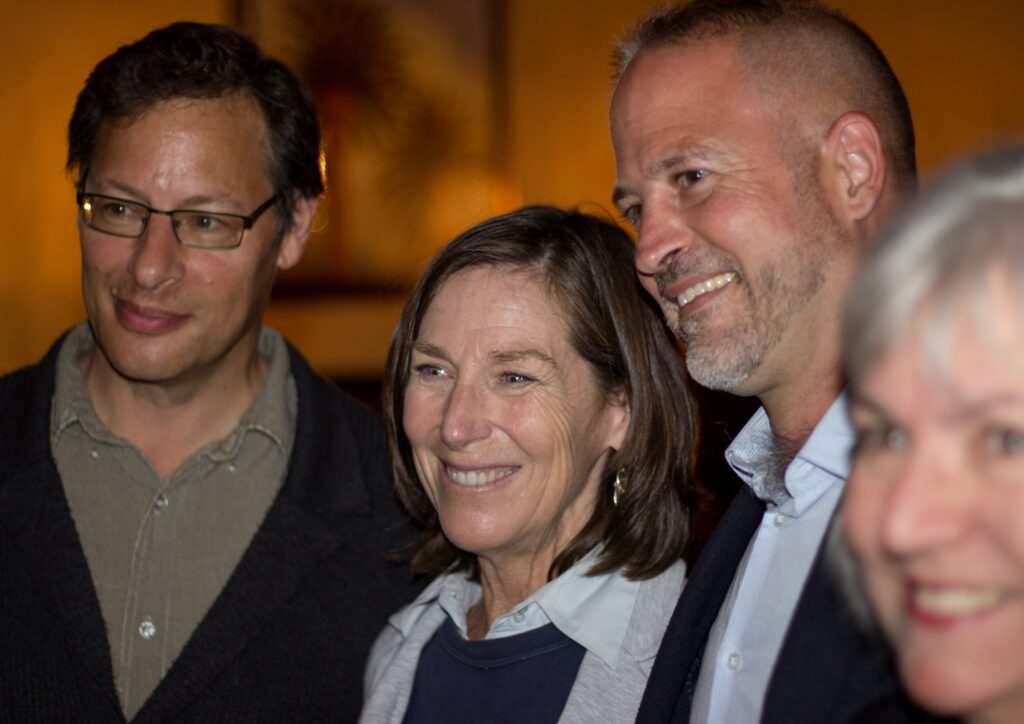 Her main opponent in the Santa Barbara County Third District Supervisor race, Bruce Porter, held an early lead in the voting booths, while news sources were reporting that the country’s new president would be inheriting a politically fractured nation.

Democrats everywhere felt the sobering start of a new era with President Donald Trump’s election later that night, but Hartmann was supposed to be celebrating a milestone in her public service career — her appointment as a county supervisor.

Hartmann and Gina Fischer, a highly-involved staff member in Hartmann’s Isla Vista projects and representative for the Third District office, agree that the night of the election was a somber time. In response, Fischer said some constituents turned to Hartmann and local government to ease their dissatisfaction with national politics.

Hartmann said the fact that her election coincided with Trump’s placed an additional responsibility on her office to listen to constituents and bring people together rather than divide them.

Constituents from I.V. and UC Santa Barbara in particular would be expecting focused representation for their communities from Hartmann. When those precincts were counted, Hartmann’s votes took a significant jump.

In return for their votes, Hartmann has had a busy and effective year working on I.V. infrastructure, public safety and support for the I.V. Community Services District, which has benefitted from donations from Hartmann’s office.

She has worked to get the I.V. Community Services District (CSD) off the ground, giving the newly-formed government start-up funds, leasing them the previous Third District Supervisor Doreen Farr’s office and giving them a space to provide programs in the community room of the Isla Vista Neighborhood Clinic building.

Because a large number of the county’s residents live in unincorporated areas, it is Hartmann’s responsibility to represent those constituents, making I.V.’s self-determination through the CSD even more important.

“I am always scampering around from Guadalupe to Vandenberg Village to Los Alamos to Solvang to I.V. to here in Santa Barbara. So now I.V. has its own government, and to see that begin to take shape is really exciting,” Hartmann said.

Fischer said Hartmann’s office is interested in “culturing conditions for [the] CSD to grow,” giving the new government an opportunity to represent its constituents in a way that might previously have been more difficult through the county.

“We’re watching something very exciting be born and I’m delighted to be one of the midwives of many for that process,” Hartmann said.

I.V. CSD Board Chair Ethan Bertrand told the Nexus Wednesday he’s had “nothing but good experiences” working with Hartman and her staff, saying she has always been attentive and willing to help constituents.

“Without Supervisor Hartmann’s early support, we wouldn’t have been able to begin providing services so quickly,” Bertrand said.

Hartmann’s office contributed $3,000 from their discretionary funds in the last fiscal year and $2,000 in the current year, he said, which has helped the district in their start-up costs.

Since its creation, the I.V. CSD has created an internship program in collaboration with UCSB’s Department of Political Science, managed scheduling for the community room and launched an expansion of the Community Service Organization’s escort program.

The District has also developed a policy manual, hired legal counsel and acquired insurance, fulfilling critical steps in its formation.

Bertrand expressed praise for Hartmann’s work in I.V. and said that the county’s infrastructure improvements have been especially helpful for her constituents.

The county Public Works Department installed a stoplight in August at the intersection of Pardall Road and Embarcadero Del Norte, citing a need to mitigate the amounts of collisions in the area.

The county also installed a sidewalk on the 6700 block of Sabado Tarde Road last spring.

Bertrand said Hartmann’s work on public safety issues through the I.V. Safe task force has helped people better understand the issues they are facing in the community through her focus on the data involved in these subjects.

Hartmann said her office’s number one priority is to keep students safe and said she was pleased that this year’s Halloween weekend saw fewer arrests and medical transports.

While Hartmann has focused on helping her constituents by attempting to support I.V.’s bid for self-governance through the CSD, a main focus of hers going forward will be helping the Community Center become a source for community programming for her diverse constituency.

“We expect to bring everybody in Isla Vista from different age groups, different ethnicities, different — not everyone will be students — and hope that we can create a stronger sense of belonging to the I.V. community,” she said.

She said she also hopes to soon build a “pipeline” between UCSB and the county to bring students into the county.

Despite what she said was a “steep learning curve” to the first year of her term, Hartmann said the work has been fun, and she has built connections with I.V. officials like Bertrand who have said working with her is a “true pleasure.”

Constituents will continue to look for strong leadership in Hartmann and other local elected officials, as students and I.V. residents have shown that they are resistant to the changes occurring on the national level.

A version of this article appeared on p.3 of the Nov. 9 print edition of the Daily Nexus.