The Daily Nexus
Opinion
An In-Depth Look Into Reasons for Veganism
November 9, 2017 at 6:23 am by Yi Xiao Yue

Damian Lillard, an NBA all-star, decided to go vegan to get ready for this year’s basketball season.

With the rise of physical and mental health studies, veganism has attracted more attention in recent years. Major food industry companies like Hellmann’s are introducing their own vegan products. Besides the food aspect, luxury brands Gucci and Armani recently announced that they are going fur-free, joining other big brands like Stella McCartney, Vivienne Westwood and Calvin Klein.

While it is widely acknowledged that red meat consumption may lead to cancer, many people still believe that other animal products such as white meat — like chicken, fish, eggs and dairy — are healthy. However, contrary to popular belief, researches have proven the opposite.

Research published by the American Academy of Dermatology in 2005 concludes that there is “a positive association with acne for intake of total milk and skim milk.” They studied 47,355 women by asking about their dairy intake and acne development. The immense sample size that is usually difficult to reach in a controlled experiment certainly boosted the study’s credibility.

The commentary that accompanies the article hypothesizes that this association may be due to hormones contained in milk that are produced during cows’ pregnancies. It also points out that in nature, offspring consume milk of their own species and the mother ceases producing milk after weaning, the process of introducing mammal infants to adult diets and the withdrawal of milk supply. So, it seems unnatural for humans to consume the milk of another species during their post-weaning year.

Now, due to individual genetic differences, not everybody experiences a serious breakout even when they consume milk heavily. However, most people are concerned about their bone health, since this is one big reason that they drink milk.

While people commonly believe that milk is good for bone health, research published in the National Center for Biotechnology Information tells you otherwise.

Though the study admits that milk consumption leads to peak bone mass and is “expected” to help prevent bone fracture later, it surprisingly finds that “milk consumption during teenage years was not associated with lower risks of hip fracture in older adults” and “a significant nine percent increase of risk was observed in men for each additional glass of milk consumed per day.” 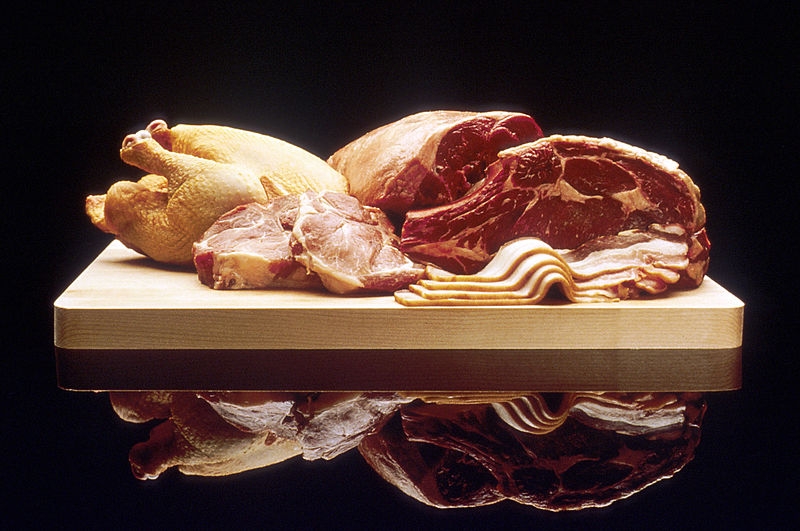 While it is widely acknowledged that red meat consumption may lead to cancer, many people still believe that other animal products such as white meat — like chicken, fish, eggs and dairy — are healthy. However, contrary to popular belief, some research has found otherwise. / Courtesy of Wiki Commons

In fact, an article from the Washington Post quoted a Harvard professor of nutrition: “Until very very recently, from an evolutionary perspective, humans would have consumed no milk products at all and would have consumed calcium from other sources … Populations that drink no milk at all have perfectly fine bones.”

After some information about the “healthy” milk that is advertised and modeled all over in television and movies, let’s take a look at some other animal products that are supposedly a good source of protein and therefore nutritious.

You have probably heard the saying that saturated fat and cholesterol are the devil and white meat and eggs clog up arteries and promote heart disease, which leads you to think that eating lean meat will solve the problem. But it actually does not.

According to a study by the Cleveland Clinic, a substance called choline can be metabolized by intestinal bacteria and turned into something called trimethylamine-N-oxide (TMAO), which increases the risk for heart attack, stroke and death.

Unfortunately, eggs, poultry, shellfish and fish are major sources of dietary choline, as a paper from the National Center of Biotechnology Information points out. So until the egg and meat industry figures out a way to extract the choline out of its products, you might want to think carefully before purchasing these products if you want a healthy heart. Even when that day does come, instead of buying animal products that need to have so many contents extracted before they are safe to consume, it might be a good idea to simply try getting protein from a healthy plant source that is just fine to eat as a whole.

It seems that those who advocate for veganism do not merely have support from moral arguments; they are also backed by science. Fortunately, UCSB’s dining commons provide an adequate amount of vegan options for someone who tries to live this certain lifestyle. So next time you are in the dining commons, try them and you might be surprised that they don’t taste bad after all.

“many people still believe that other animal products such as white meat — like chicken, fish, eggs and dairy — are healthy. However, contrary to popular belief, researches have proven the opposite.” Please. “researches have proven the opposite”. This statement is so poor that it is surprising it passed the editors. Something is proven based on a couple studies? So the whole argument is solely looking at one side of a multi-faced story? The amount of contradictory science available is so vast that such a misleading statement needs to be expanded on in a way greater fashion in order to… Read more »

how did you even get accepeted