The Daily Nexus
Volleyball
Gauchos Aiming to End No. 23 Mustangs’ Undefeated Streak
November 2, 2017 at 5:03 am by Spencer Ault

The UCSB women’s volleyball team knows it can hang with Cal Poly; it just needs to prove it can do so for more than one set.

The No. 23 Mustangs haven’t lost since Sept. 7 and are 10-0 in the Big West. They are a juggernaut that has rolled through almost every other Big West opponent without dropping a set.

When they came to the Thunderdome on Oct. 14, however, the Gauchos were ready to snap the streak.

UCSB took the first set in extra points and amassed 15 kills against just four errors on a hitting percentage of .289.

That was as good as it got for the Gauchos that night. The Mustangs ran off with the rest of the match and continued their stampede through the conference, while UCSB was left wondering what exactly had happened. 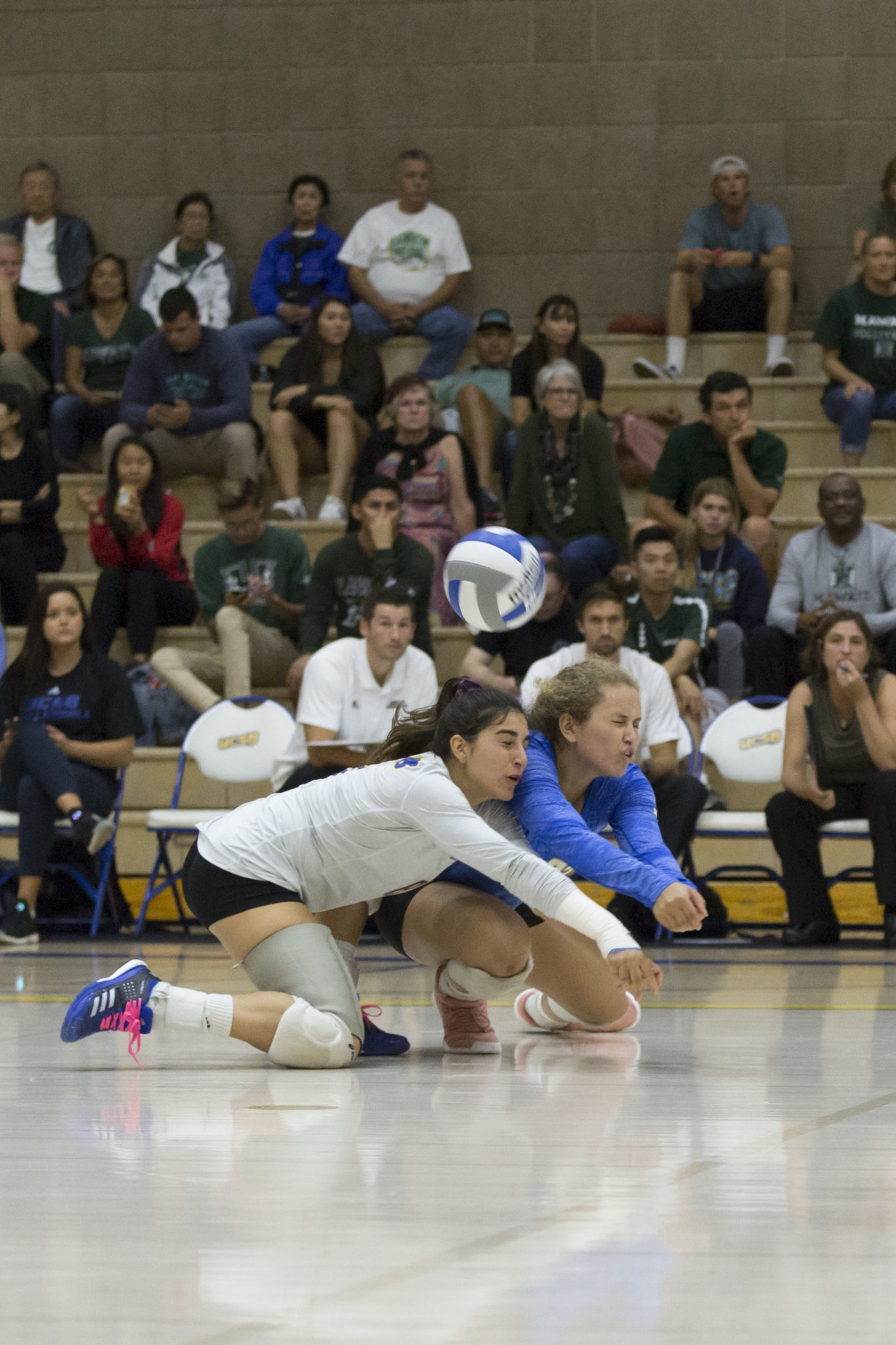 Now, with a chance at redemption, Santa Barbara travels to its Blue-Green rival’s home stadium, this time boasting just a 6-16 overall record but an even 5-5 Big West mark.

Despite being winners in three of their last four games, the Gauchos will need to dig deep to beat a Mustang team that has won 16 straight games and has a 21-2 overall record alongside the aforementioned unbeaten conference record.

In those 16 matches, Cal Poly has outscored its opponents by a 48-8 margin. Santa Barbara is only one of four teams that have even taken a set from the Mustangs in that span.

If it is going to upset the Mustangs, UCSB will need a much more consistent and well-balanced attack than what it had last time.

After that sparkling first set, the Gauchos hit -.057 and .000 in the following two, which will never be sufficient against any team, let alone a powerhouse like Cal Poly.

“We were able to keep Cal Poly below their attack average for the match,” Head Coach Nicole Lantagne Welch said. “That will be one key. We also need to attack at a much higher clip.”

Sophomore outside hitter Lindsey Ruddins, as usual, was a one-woman wrecking ball against Cal Poly, and the Gauchos will likely need something similar to a repeat of her 21 kills, eight digs and five blocks in the rematch.

Since that match, the redshirt sophomore outside hitter has been on fire, averaging 24 kills per match along with 12.75 digs per game, earning some Big West and National Awards along the way.

However, Ruddins isn’t the player Santa Barbara needs to worry about.

Instead, the Gauchos will need high performances from other young guns to keep up the firepower.

“We had three players that didn’t really produce offensively last time,” Lantagne Welch said. “If we can get at least two more going to have four producing, that will be important.”

More specifically, Welch is looking for sophomore outside hitter Chloe Allen, sophomore middle blocker Charlie Robinson and freshmen middle blockers Kija Rivers and Nicole Omwanghe to step up and produce against the Mustangs.

Adding that attack depth would do wonders against the stout Mustang defense, but it hasn’t quite clicked for the Gauchos so far this year.

Allen is coming off a 13-kill performance against Hawaii and seems fully recovered from a midseason injury.

Robinson and Omwanghe have shown flashes throughout the season, with Robinson’s 129 kills placing her second on the team, but they have yet to sustain their success for an extended period.

All that attacking, however, won’t do much if the Gauchos can’t contain the Cal Poly attack, led by Adlee and Torrey Van Winden.

The sisters smashed through the UCSB defense back in early October, combining for 39 kills and 48 total points.

“[The Van Windens] are both great players and sure will get some kills,” Lantagne Welch said. “What we have to prevent is either one of them taking over. Keep them to reasonable numbers.”

Not happy with her team’s defensive performance last weekend against Hawaii, Welch has made that area of the game a focus in practice leading up to the Cal Poly match.

The Rainbow Warriors, another Big West powerhouse, never hit below .200 in any of the four sets on Saturday, something that UCSB won’t survive a repeat of against the Mustangs.

On Friday night, the Gauchos will get a second crack at Cal Poly and another chance to pull off the major upset.

All it’s going to take is excellence in every facet of the game, this time for more than one set.

UCSB travels to San Luis Obispo to take on Cal Poly on Friday night at 7 p.m.