UC Santa Barbara’s Institute for Energy Efficiency (IEE), an interdisciplinary research institute dedicated to the development of cutting-edge science and technologies that support an efficient and sustainable energy future, has received $4 million for the continual support of one of its four fellowships.

The IEE is focused on the development of science, engineering and policy. It was established in the 1990s and has now developed into six solution groups, with each group working on unifying goals that are related to getting the solutions with immediate and lasting impact on the energy equation.

“I certainly expect [the IEE] to be internationally renowned in the area of energy efficiency. We should be in the top few around the world—so some areas believe—that exist today, like in the LED lighting area is probably the best in the world or at least the top couple,” John Bowers, the Fred Kavli Chair in nanotechnology, director of the IEE and professor in the Electrical and Computer Engineering Department, said.

From his perspective as a leader of such an extraordinary institute, Bowers is taking a series of factors like faculties, funding, researches and industries into his overall planning of the development of the IEE.

“We are striving for innovative research. We [accept many] grad students and want to let them do world-class research and make a name for themselves and get their own jobs, so I’d say our focus is on innovative research,” Bowers said. “We’re not an industry. We don’t have profits, but if you do innovative research that is important research, then it will and can be picked up by industry; we need to have the innovative ideas that help California industry.”

Bowers is not only the director of the IEE; he also plays the leading role in its photonics group. They have worked on fiber optic networks, photonic integrated circuits, high speed photonic and electronic devices, femtosecond lasers and physics. Right now, he and his fellows are working on the quantum dot lasers on silicon, a semiconductor laser that uses quantum dots as the active laser medium in its light-emitting region.

“Performance [was] improved by a huge amount. I would say work efficiency has gone from five percent to 38 percent; the lifetime has gone from one month to 100 years, basically. So in the past, we worked on quantum well lasers, and now we really focus on quantum dot lasers,” Bowers said.

He mentioned how the research achievements of IEE can be great help for a lot of industries. 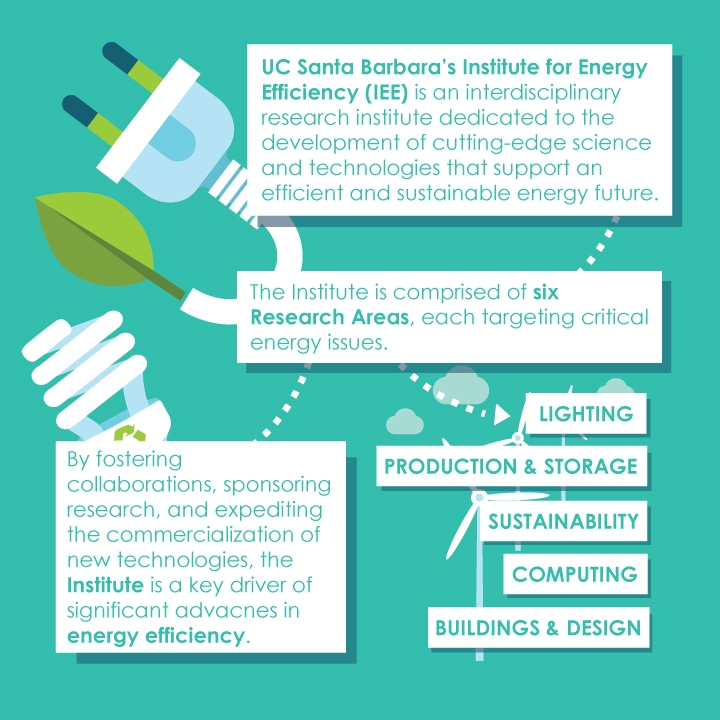 This fund was created by George Holbrook, a local resident, venture investor and philanthropist, in 2011. Currently he has donated $4 million to fund continued support of the Holbrook Foundation Fellowships.

“It’s all future-oriented, and it feels good to do it. I expect great things, of course, and we’ve had really bright students — great future engineers and scientists. The fellows by and large have been an impressive group that hopefully will do some good in the world. I want them to think big. Hopefully they will, in fact, change the world,” Holbrook said.

In Bowers’s general evaluation of IEE, the entire institute is running in a virtuous cycle. However, the IEE is not content to stand still, and this team is bravely scaling new heights.

“The need has gotten even greater. When we started the institute, there was the problem of burning too much oil and sending too much money overseas to pay for oil. That became less of an issue with fracking and precious gas, but we’re still consuming too much natural resources,” Bowers said. “The need for success in energy efficiency is even more important than when we started, so all the economic drivers are there, so we need to contribute to more efficient automobiles and more efficient buildings and lighting and data centers, which are becoming ever more of a use of our electricity, so we have to get better than we are today.”

For now, the most anticipated item of the IEE is Henley Hall, with plans to start construction next April. It will be the new home for all the faculties and students of the IEE who are currently scattered among different buildings.

“Well, it’s that cross-fertilization when you see people on a daily basis that stimulate it; when you see people in the hall working on a similar problem, that casual conversation stimulates you to have a new idea. Getting people together has always worked really well,” Bowers said. “If you needed to talk to people for growth or theory, some of the best people are there and you can talk to them in 10 minutes and that’s what happens here, so we try to group important topics together, and energy efficiency is an important topic. It’s good to cooperate.”

As a world-leading researcher, Bowers has his unique creed to the relationship between the IEE and industries.

“You can’t suppress progress, so you need to come up with new ideas to solve important ideas you have. Look at Rochester. It has not done well because Kodak and Polaroid have not done well; they should have embraced innovation and not worried on their product line of film and focused on digital cameras, and then they would be in a much better place,” Bowers said. “We don’t want to be like Rochester and lead industry and give the new innovative ideas. Some companies will accept it, some won’t. The old companies will be dinosaurs and the new ones will grow, so that’s the obligation we have as a public university in California: to come up with new ideas that spawn new jobs and help existing companies innovate.”

In the future, opportunity and challenge will still coexist. However, as the IEE is now operating under a reasonable and healthy management method, it will bring more and more achievements to UCSB and glorify its reputation as a top-research university.