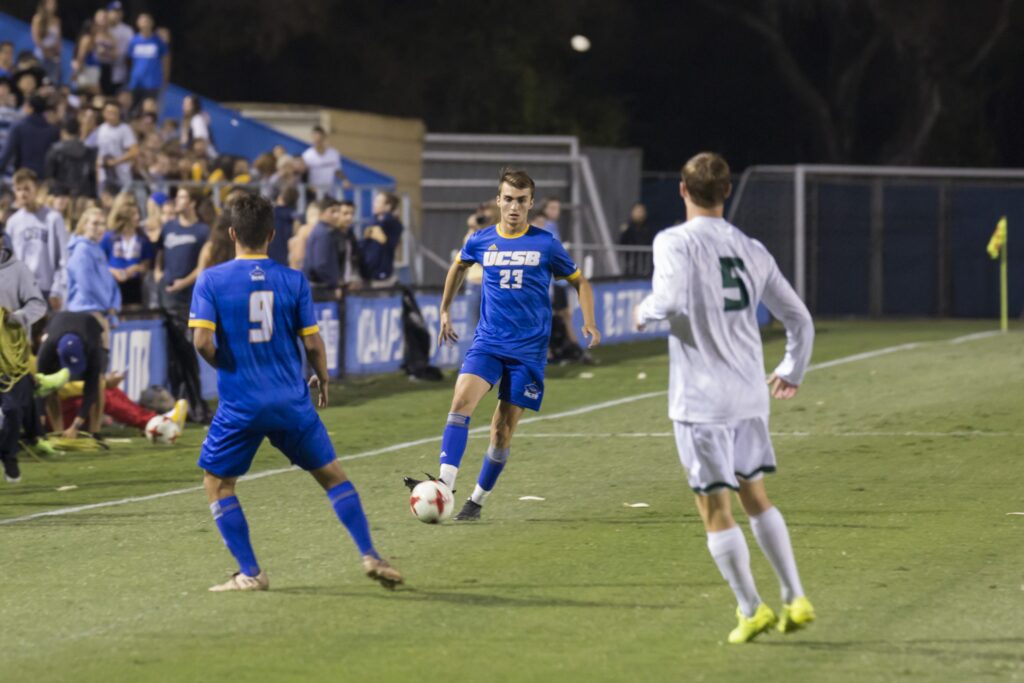 Upon entering its matchup versus Sacramento State Wednesday night, much was at stake for the UCSB men’s soccer team. The Gauchos were in search of clinching the No. 1 seed in the Big West North Division standings in their final home match of the season.

A 0-0 draw was the final result of the weekday game as neither of the two teams managed to net goals during the 90 minutes of regulation play.  Nearly changing the match’s narrative was the forward-to-forward connection of freshman Rodney Michael and sophomore Ignacio Tellechea.

In the match’s 58th minute, Michael sent a cross from the wing of the field to Tellechea, who then struck the ball into the net. Unfortunately, the play was called offside and the score still remained 0-0.

“If you think about it, that right there was the four, five goals we needed. So, in the end, it just comes down to personnel and the function of forwards [not making plays quick enough and passing] and playing as forwards,” Head Coach Tim Vom Steeg said.

Following Wednesday’s match, no changes took place in the North Division standings as the Gaucho-Hornet stalemate led to one point for both teams, leaving UCSB in second (15 points) and Sac St. in third (14 points), however, UC Davis was crowned the Big West North Division champion after its 2-1 victory over Cal Poly on Wednesday.

The game whistle sounded and both teams were off to a booming start. The Sac State Hornets were the first to strike as Gaucho freshman keeper saved an open shot on goal. This would be the first of only two on target shots the Hornets had all night.

The Gauchos then peppered in a couple shot of their own, but besides foul trouble from both ends, the rest of the first half remained pretty stagnant regardless of all the team substitutions. Both teams would end up with a combined total of 33 infractions on the night.

A standout moment in regulation, was when a Red Card was given to the Gaucho bench in the 68th minute, in response to their passionate reaction to what the team felt was a no call.

As for the second half of play, UCSB went ahead and took reign of possession. This eventually proved to be a recurring theme for the home side as it seemed every following counterattack was called offside as well leading to the Gauchos seventh overtime match of the season, the fourth that went into OT tied 0-0.

The Gauchos were instantly aggressive in the opening minutes of the first OT period, attempting three corner kicks in a row, but to no avail. There was only one shot attempted in the second OT period for either team, and that shot was by senior Kim.

The lack of playmaking ability from the midfield was prevalent as all key passes from half field just seemed to be swallowed up by the Hornet defensive line. In the end, the end of the game had arrived and both teams settled for the draw.

“Our forwards are young; they work hard and have loads of talent. But passing is sometimes an afterthought for them. So when they finally get into that situation, it’s too late, which is why we need a guy that can get up the field and make those passes,” Vom Steeg said. “Subsequently, it’s forward passing to forward so these passes end up being too short, too far or behind. Which is when the goalie comes running up at you and you won’t have enough time to run around him or chip the ball over.”

Ultimately, this was the case for both teams. Regardless of all the counterattacks and offside calls, neither side was able to pull the trigger and earn the winning goal. Whether it was nerves or just quality defense on both ends, it was a great showing no doubt.

Senior night was also upon us and some of the Gauchos were about to play their final regular season home game of the season. Players being honored recognized for their contribution to the team included: seniors Seo-In Kim, Omar Montalvo, Josue Salgado, Alex Liua, and Randy Mendoza. Each of these players started or were subbed throughout the match.

The Gauchos now head away for their last game of the season as they face Cal Poly in the last installment of this year’s Blue Green men’s soccer rivalry beginning at 7 p.m. on Saturday, October 28 at Alex G. Spanos Stadium.