The Daily Nexus
News
Flag Expert Tucked Away in UCSB Library
October 26, 2017 at 12:58 am by Hannah Jackson 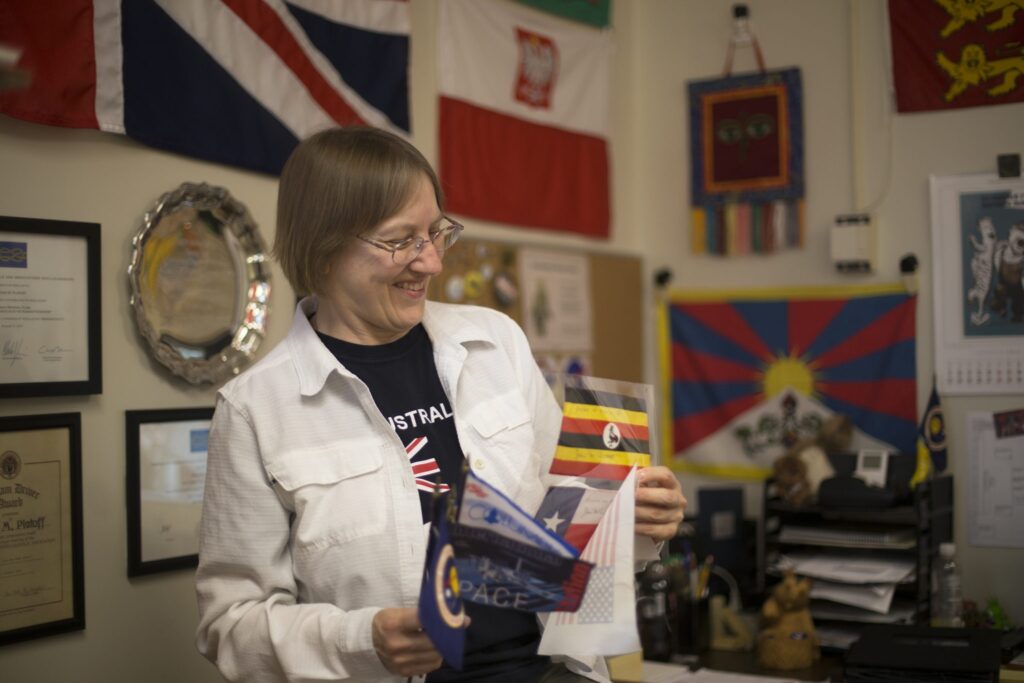 Platoff is the university’s Slavic studies, geology and military science librarian. In addition to her duties as a librarian, she studies vexillology, the study of flags and their historical and symbolic significance.

Platoff’s interest in flags began as a childhood obsession. As a young girl, she recalled collecting flag patches and recruiting friends and family to help her gather them.

Today, she has a collection of over 3,000 flags and is the leading North American expert on National Aeronautics and Space Administration (NASA) flags and regional flags of Russia and the former Soviet Union.

Platoff says flags are very symbolic and emotion-filled objects that can represent different ideals for different groups. She said an understanding of the connection between emotions and politics could help people understand the take-a-knee movement.

“To some people, the take-a-knee movement is about the flag,” she said. “There is so much emotion tied up in them that people read them different ways depending on their personal background and history.”

The take-a-knee movement began when 49ers quarterback Colin Kaepernick remained sitting during the National Anthem at a football game in August 2016, which since then sparked different football players to kneel during the anthem.

“If you don’t understand the perspective of African Americans … or perhaps other groups that do not enjoy equal treatment under the law, you would see it as an affront to the flag,” Platoff said. “But if you look from their perspective, you can understand why the take-a-knee movement has taken off.”

Platoff believes she has the best flag collection in North American relating to NASA, as well as flags made in Russia or the Soviet Union.

Through her vexillology research, Platoff has found connections between the United States and Russia through both countries’ experiences with nationalist groups. She says flags are oftentimes controversial symbols because they can be interpreted differently depending on an individual’s personal history.

Platoff said a new nationalist group in Ukraine uses the flag of the old Ukrainian Insurgent Army, a former nationalist group from World War II which fought both with and against the Nazis, as the symbolic representation of their group. Ukraine has a mix of Ukrainian and Russian culture.

“When you see the Confederate flag you may think it’s a racist symbol, but someone from the South will see it as a symbol of their Southern heritage,” Platoff said.

Platoff developed her flag expertise when she worked as a librarian at the Johnson Space Center in Houston, Texas, where she became interested in different NASA flags. Within her current collection, Platoff has flags that have flown on Gemini and Apollo space missions.

Platoff’s work with NASA’s flags also extends past her collection, as she wrote the official NASA history of the flag used in the Apollo XI mission, as well as a paper for the University of California negating moon landing conspiracies.

She explained that conspiracy theorists were examining the wrinkles of a flag on the moon, which appeared to be blowing in the wind — impossible in a place with zero gravity. She refuted their claims by noting that the flag was created with two rods running perpendicular to the vertical pole, allowing for the illusion of movement.

Platoff has also held many positions within North American Vexillological Association (NAVA), serving as the first and second vice president, and is now the director of NAVA’s digital library.

Platoff says she is most proud of the publication of her first published work on flags in NASA, “Where No Flag Has Gone Before: Political and Technical Aspects of Placing a Flag on the Moon.” The paper won the prestigious Captain William Driver Award, which is presented at NAVA’s annual conference.

“No one had really written anything about the political aspects in deciding to put a flag on the moon and the technical engineering problems associated with it,” she said. “This was the first work to sort of look at those together.”

A version of this story appeared on p. 1 of the Thursday, Oct. 26, edition of the Daily Nexus.