The Daily Nexus
Opinion
UCSB’s Disinterest for Memes Nauseates Me to My Core
October 24, 2017 at 9:55 pm by Katherine Chen 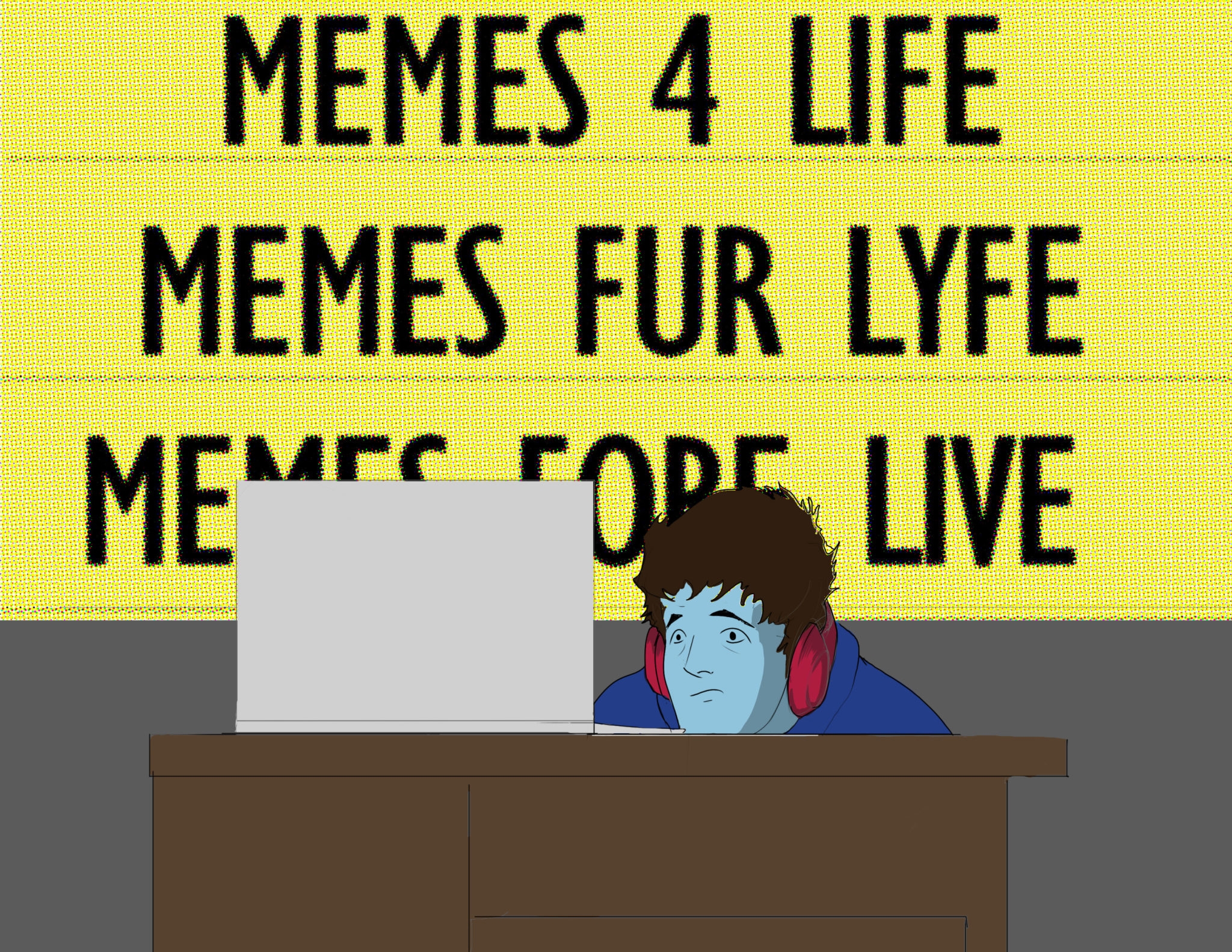 On a bright, cold morning this past spring, my best friend Zoe met up with an alumnus from our high school who was attending the school she had committed to just months before, Columbia University.

Over iced coffee, he gave her various insights about school culture, including the fact that school spirit at Columbia was nonexistent. People failed to show up to Columbia’s Division-I sports games, Greek life was weak and in general, he felt that undergrads had only the most minimal connection to one another outside of intimate friend groups and slightly larger communities based on identifiers of class, race, ethnicity, gender and sexual orientation.

Then, he told her how all of that changed when the meme page was born. Apparently, the Columbia Facebook meme page, known commonly as “Columbia Buy Sell Memes,” has done wonders for bringing the community together solely through the distribution of memes.

My friends and I grew up inhaling memes and bleeding memes. We endured the amateur level memes of the early 2010s, the embarrassing iFunny memes and we rode the wave to the memes of today: the most deliciously deep-fried, niche, cringeworthy, self-deprecating memes. I even find myself attracted to guys who quote quality Vines to me and understand when I make Vine references back.

Knowledge of your own school-specific memes automatically connects you to your peers.

Columbia Buy Sell Memes surfaced at a time when many other big-name colleges were coming out with their own meme pages on Facebook, like Cal’s UC Berkeley Memes for Edgy Teens (UCBMFET), Yale’s Memes for Special Snowflake Teens, Harvard’s Harvard Memes for Elitist 1% Teens and UCLA’s UCLA Memes for Sick AF Tweens.

These prestigious meme pages sought to create a space for humor and group identity for their respective schools while maintaining a safe space devoid of hate speech and ignorance. Additionally, there were two unexpected byproducts of these pages: a natural form of digital social currency and a rivalry comparable to any rivalry on the collegiate football field.

Columbia’s meme page, which currently has over 34,000 members, allows members to share original relatable content, most of which is specific to the university’s students. As Columbia’s current undergraduate enrollment is 6,102, it’s expected that many of the members are current students, graduate students, alumni or outside observers like myself. While anyone with a Facebook profile can choose to join the group and share a laugh, do not equate access to the meme page to membership within the community.

Knowledge of your own school-specific memes automatically connects you to your peers. Even if you have nothing in common with the cute man-child that sits behind you in section, you both probably follow your school’s meme page. Someone who doesn’t go to your school may be able to understand your shared meme, but ultimately, they don’t live the meme: For them, it’s merely surface-level appreciation of a deeply shared understanding.

To scroll through a school’s meme page is to get a small taste of its culture and its student body, especially when college rankings today seem to be biased and firmly established.

Across meme pages, people are motivated to create quality content for personal gain as well: Well-curated memes bring their creators both recognition as well as thousands of likes, and it’s my personal belief that we are not far from linking our most successful memes on our résumés.

Even simpler than that: It’s satisfying to make other people laugh.

It’s not surprising that the most prestigious schools in the country also have the most active meme pages: It’s proof that students recognize the their school’s page as a part of their school’s value. Each meme page has its own unique history and flavor.

To scroll through a school’s meme page is to get a small taste of its culture and its student body, especially when college rankings today seem to be biased and firmly established. Meme pages have become a new way to compete for No. 1 between the top universities in the country. Here, students from different colleges are not comparing ACT scores, graduation rates, average income upon graduation or even sports: The focus is on community and collective humor. While there was never a Cal vs. Harvard football game, there certainly is a rivalry for the best meme page of the top schools in our nation.

The page has improved marginally since then in both membership (about 3,400 people), and posts have become more tailored to the specific UCSB community, but posts are infrequent and participation through likes, comments and the tagging of friends in these memes is minimal. It doesn’t make sense: Our student population swells to over 20,000, and most have Facebook accounts.

In my frustration, I had failed to recognize that the space for UCSB memes I so craved for already existed long before the formation of even the dankest meme page, UCBMFET (which currently boasts just shy of 130,000 members) — it was UCSB’s Free & For Sale.

The page has over 27,000 members, and we all come to rejoice in the beauty of cheap thrills. Because most students live in the one square mile of bliss and regret known as Isla Vista, the page’s transactions take place face to face in I.V.: Inadvertently, it’s a way to practice your small talk and make casual acquaintances.

And here’s the real zinger: unbeknownst to most, UCBMFET was created from Berkeley’s own Free & For Sale page. And,as popular as it is, I believe it has lost its edge. Even Chris Tril, the page’s creator, agrees with me in an opinion column he wrote for The Daily Californian.

“The masses complain about my page’s strict moderation yet also complain about the poor quality of other knock-off university meme pages that allow completely open submissions,” he said. “Administering UCBMFET has been glorified babysitting.”

He also points out that a half-hearted meme he created of a dog wearing an apron received more attention than anything he had ever written for The Daily Cal.

I’m penning this as an urgent plea to strengthen meme culture at our school because we need it for the same reason that Columbia’s students needed it: to find common ground. We are a school that is majority white, Hispanic and Asian American; like any other school, our student body is isolated into racial groups, but we pay little attention to black, indigenous American or mixed-race voices.

Many students are student athletes, and many more choose to partake in greek Greek life. Many of these groups will physically separate themselves.

For example, in my COMM1 section, the white people sit on the right side of the room, and the people of color sit on the left side of the room. It was just how we naturally sat since the first day of class. Given our current political atmosphere, I would argue that it is our social responsibility to actively seek that common ground and encourage awareness of intersectionality. It requires such little effort to produce more quality content that can help me relate to the white people who sit on the opposite side of the classroom in my COMM1 section.

My friend Alex, a grad student here at UCSB and the creator of Swampy UF Memes for Top Ten Public Teens, advised me to take action. Remembering Tril’s pain and regret, I mentally rejected that idea. However, I listened to Alex spew out a plethora of beautiful meme ideas and realized that there was no lack of relatable content: The memes were all out there, Gauchos just need to find them. The small audience in our meager meme page will not do, as the same people in our Free & For Sale page will feel right at home on UCSB Zesty Meme Cuisine for Horny Teens. Attendance should be mandatory.

So please, when you open up Facebook today in an effort to escape studying for midterms, add yourself to the UCSB meme page. Tag your friends in some sustainable, farm-to-table memes. Use that abominable laughing-crying emoji if you must. Post in the group.

I will not stand here and allow my fellow Gauchos to settle for stale, generic, reposted Instagram memes. I demand hand-tossed, lightly sautéed, beautifully garnished UCSB memes about amateur biking and DLG late night. This has been a love letter, a public service announcement and a bitter rant all in one. And if you have time, please send me hate mail and dank memes.

Katherine Chen wants UCSB students to learn to love memes as much as they love surfing.

What a noob. UCSB Memes was and is still gold.

A Call to Action without a Link?

Wow, great and refreshing! I am hopeful!