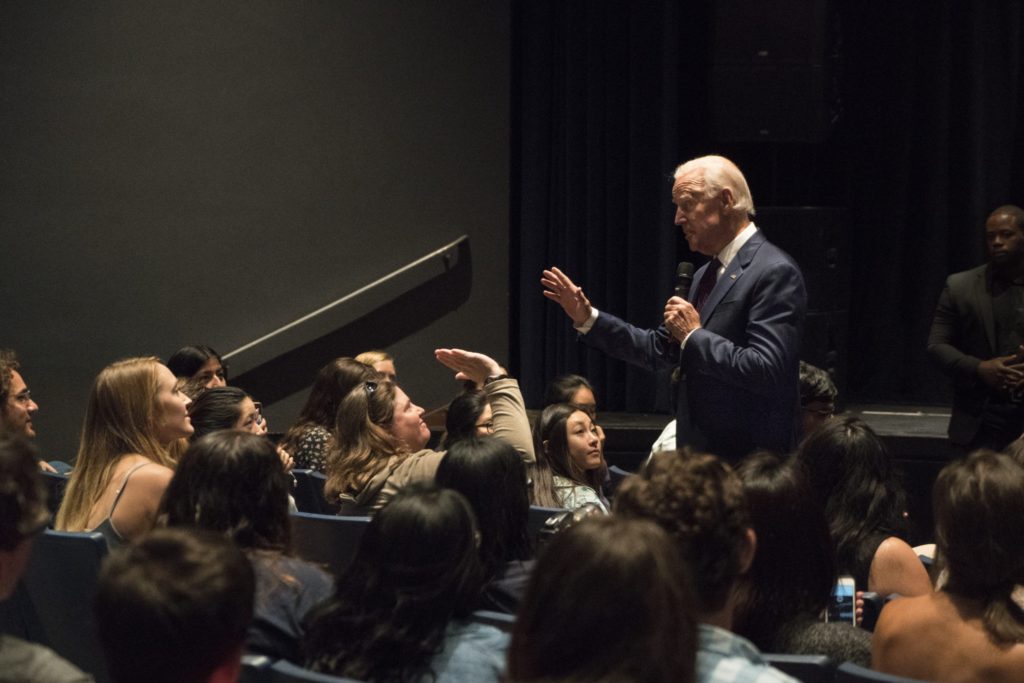 Biden recalled how he stumbled into politics as a young 29-year-old “kid.” He expressed hope for millennials as they grow up in a divided nation and said students will be the most likely to improve the current state of the nation.

“This generation of students are the best educated, most engaged, most tolerant [and] most technologically advanced,” Biden said to the audience at the Arlington Theatre. “None of this will matter if you do not engage in the public sphere.“

Biden also criticized the rising cost of tuition and proposed a solution that could make community college free for two years.

“How can people afford education? What the hell are we doing?” he asked.

Joe Biden was the vice president under the Obama Administration from 2009 to 2017 and has played a vocal role opposing the Trump Administration since his departure from office.

Biden encouraged students to remain hopeful about politics, even if they believe the current national climate is broken “beyond repair.”

“The reason I’m so excited about the millennials is because you reached the same place my generation did in the mid-sixties,” he said. “There’s no damn reason your generation can’t [face what’s ahead].”

The United States’ involvement in the Vietnam War and the turmoil of the Civil Rights Movement throughout the 1960’s provoked protests and riots throughout the nation and on college campuses, including student anti-war protests at UCSB.

Biden spoke passionately about the recent protests in Charlottesville, Virginia and reminded the crowd that Americans must bring moral values back into the political system and reject the “phony nationalism” of white supremacists.

He also criticized President Donald Trump’s response to the protests in Charlottesville.

“The silence was deafening. Silence is complicity,” he said. “[Silence] emboldens the small number of sick people that are out there.” 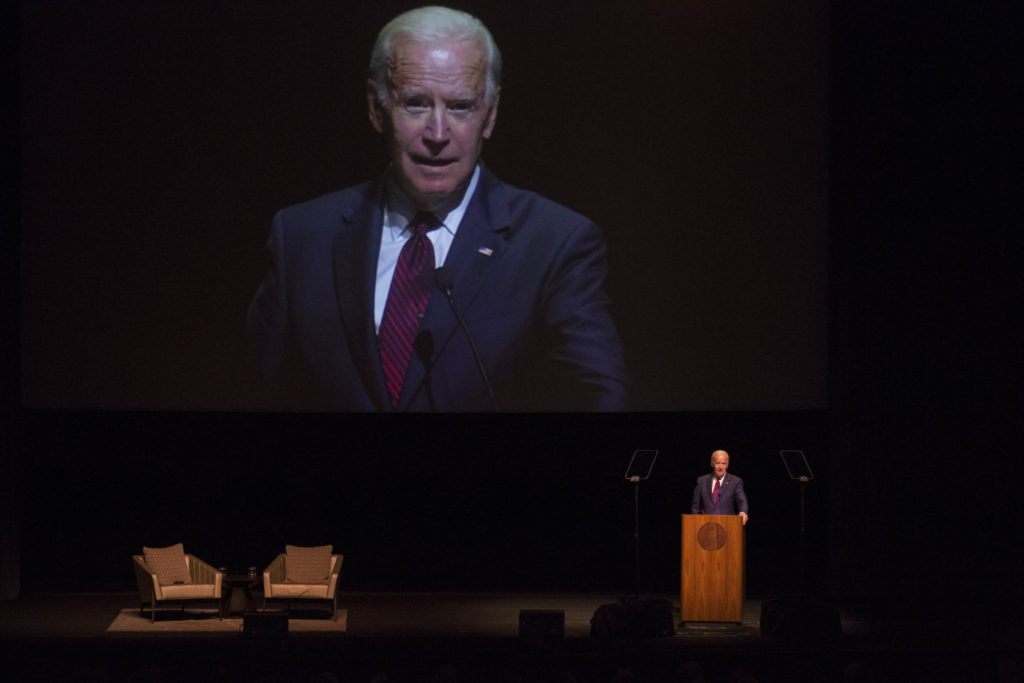 Biden began his night in front of a sold-out crowd at the Arlington Theatre in Santa Barbara. Dustin Harris/Daily Nexus

Though he often became visibly uncomfortable and withdrawn, Biden spoke with eloquence of his great personal tragedies. Prior to his son’s death in 2015, Biden lost his first wife Neilia and daughter Naomi in a car accident in 1972, days prior to being sworn into the U.S. Senate.

Biden concluded his lecture with an optimistic perspective on Americans and said he hopes the country will unite to move past its national divisions.

“In this nation, we leave no one behind,” he said. “We are not in the business of pulling up the ladders and closing the doors.”

After the lecture, audience members gathered in the lobby, many with tears in their eyes.

Sophia Mock, a second-year biology major, said she was surprised by Biden’s potential influence of her career trajectory.

“I was kind of surprised by myself when he talked about people in our generation going into public service … It was never something I had even considered before,” she said.

Some students felt that some things were left unsaid.

Ishita Kanungo, a fourth-year biology major, said she had been looking forward to hearing about Biden’s “It’s On Us” campaign regarding campus sexual assault, which seems pertinent to a university lecture.

She was interested to hear how Biden, as a white male, came to view interpersonal violence, “I would love to see how he reached that conclusion when so many others haven’t.”

After his lecture at the Arlington Theatre, Biden made a surprise visit to the simulcast streaming of the lecture in UC Santa Barbara’s Campbell Hall, where he walked through the crowd, shaking hands and giving hugs and advice to students.

The event was part of the UCSB Arts & Lectures series.

Correction: Biden was sworn into the U.S. Senate in 1972, not the Delaware Senate.