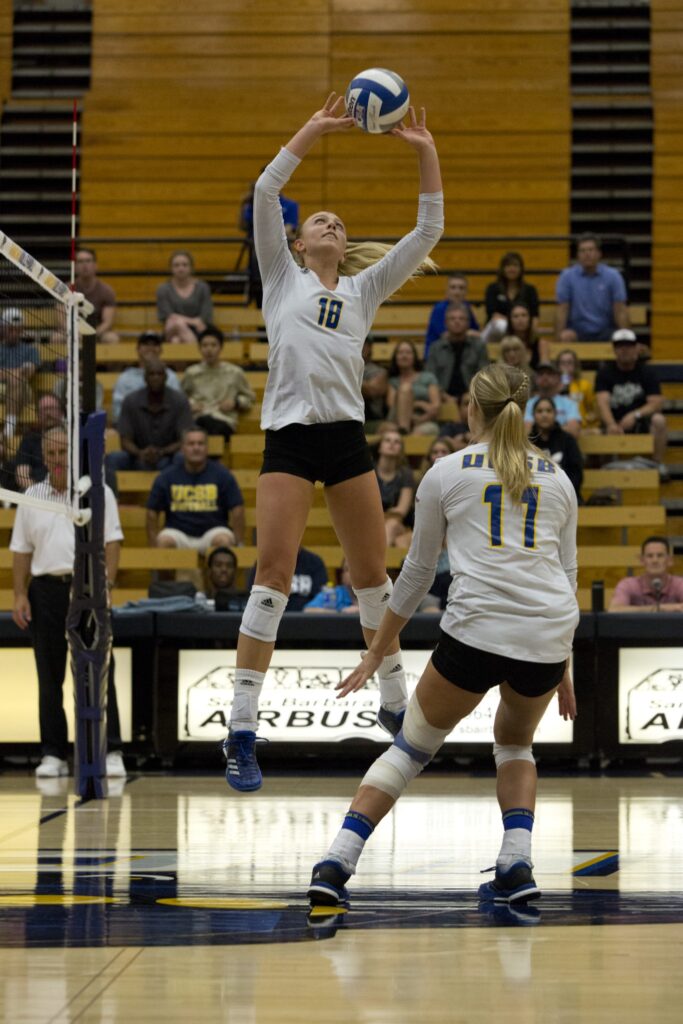 Annie Hasselmann sets to her opposite hitter. Dustin Harris/Daily Nexus

This is a new UCSB women’s volleyball team.

It has to be, because there is no way that this team, winners of three in a row, is the same as the one that dropped four in a row immediately before.

That 5-4 conference mark is good for fourth place in the Big West. The Gauchos now sit atop Long Beach, UC Davis and CSUN, the three teams Santa Barbara has beaten during the team’s current win streak.

Just a little over a week ago, UCSB was in a very different place. The Gauchos were coming off of a 3-1 thrashing at the hands of Cal Poly for their fourth loss in a row, and were staring up at the majority of the Big West.

That feels so long ago now.

“We’re just continuing to improve,” Head Coach Nicole Welch said after the match against CSUN. “We’re getting better, and we also got a couple players back that were out, so we had to deal with a lot of adversity.”

In what should be a surprise to no one who has paid attention to the Gauchos this year, outside hitter Lindsey Ruddins was UCSB’s premier attacker in both of the weekend’s matches. The redshirt sophomore had 27 kills against Long Beach State and another 20 against CSUN, both team-highs.

“(Lindsey) has been spectacular all week,” Lantagne Welch said. “We ask her to do a lot, and she really gave us a lot. She’s getting better at seeing the block and making really good choices, and it’s fun to see that evolve.”

UCSB’s stellar weekend went deeper than just Ruddins, however. Freshman Nicole Omwanghe put up a strong performance in both matches, in different aspects of the game. Omwanghe notched 11 kills, second-best on the team, against Long Beach and tied for first with seven total blocks against Northridge.

Setter Annie Hasselmann was the other Gauchos with seven blocks on Saturday night, but her game was diverse as well. Hasselmann orchestrated the UCSB offense all match with 28 kills, one match after racking up a career-high 47 against Long Beach State.

As a whole, however, Welch wasn’t thrilled with her team’s passing even despite the successful results.

“Our passing was not very good,” Lantagne Welch said. “I’m not (going to) sugarcoat it, we didn’t pass well but we actually passed better here than we did in (CSUN’s) gym because offensively we were able to sustain it.”

Welch might not have liked how her charges passed, but it certainly didn’t seem to affect the Gauchos too negatively.

Friday’s match against Long Beach State was mostly a close battle throughout. UCSB battled back from an early deficit to take the first set, blew a small lead in the second set, and then led for the majority of both the third and fourth sets.

The match against CSUN was a similar mix of drama and ease for the Gauchos, who won the first set with minimal worry. A victory in the second set, however, took an extended comeback from UCSB, who at one point trailed 17-9 and later 22-18.

Welch’s worries about her team’s passing aside, the Gauchos looked like a team reborn over the weekend, something that they’ll look to continue into the future. UCSB is staring at a difficult slate of upcoming games, as they’ll take on Hawaii, then Cal Poly and finally UC Irvine in the next two weeks. Those three teams are the best of the Big West, and will serve as a major test of the Gauchos’ improvement.

First up are the Rainbow Warriors, who will travel to Santa Barbara on October 28. The two teams will meet at Rob Gym at 5 p.m., due to the Halloween Delirium concert that night in the Thunderdome.