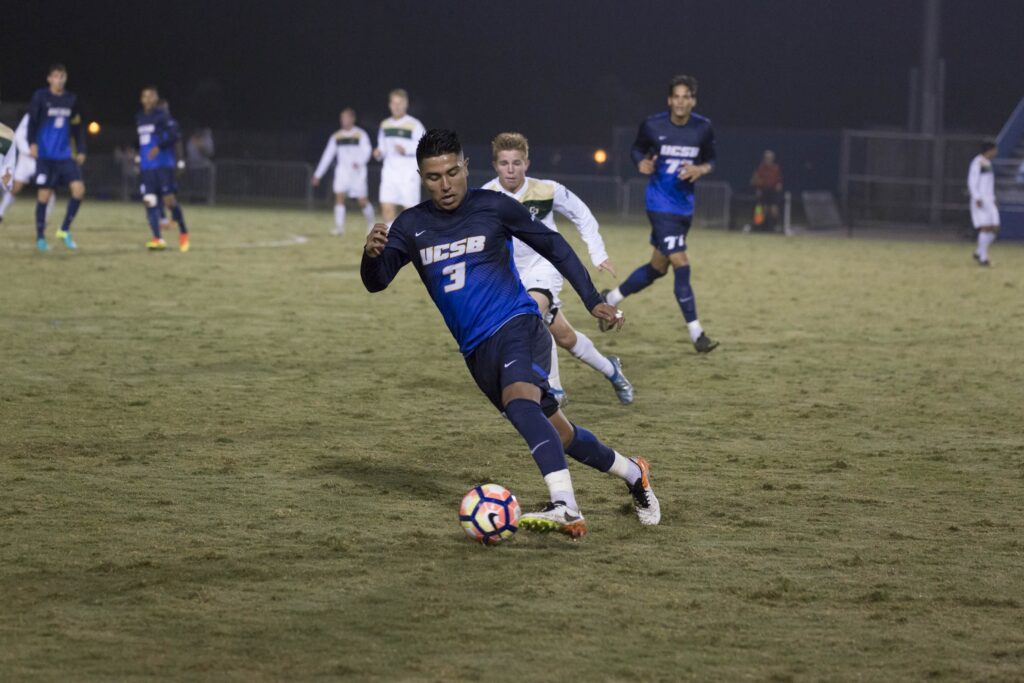 Randy Mendoza charges toward the goal after sliding past a defender. Dustin Harris / Daily Nexus

It was a competitive Wednesday afternoon as the Gauchos were able to defeat the Sacramento State Hornets via an overtime golden goal score by freshman forward Rodney Michael.

Play was heated on both sides and the closeness of the match was displayed through the full time tie. However, it was UCSB who came out on top, and the subsequent three points awarded to the Gauchos were enough to not only place them at first in their division, but also at the very top of the entire Big West table standings.

Early on, many could tell that this matchup was going to be very much revolved around possession’s sake. Surprisingly, much of all play remained in the middle third of the pitch with very few attempts on goal or crosses to the middle even occurring. Officiating was also very sharp as several close offside decisions were called. Nonetheless, the Gauchos weren’t yet aware, but they were about to play their closest game of the year. Fortunately, it also turned out to be a significant win for them as well.

Following kickoff, the first half started out very aggressively as it only took 10 minutes before UCSB was granted a yellow card. This would be the first yellow card out of a total of 4 through the remainder of the game as play was filled with consecutively fierce challenges.

However, Sacramento State probably would have leveled for a yellow card worthy challenge; instead an ill timed handball within the 18 yard box placed the Gauchos in a dangerous position to score. And score they did.

The first goal on the day came in the 19th minute of regulation time off said free kick, and it was none other than freshman forward Rodney Michael who put his team on top. Michael put his laces through the dead ball from about 10 yards out as the Gauchos celebrated their early lead.

Yet, soccer is a game full of surprises as the Gauchos weren’t able to bask in this goal’s glory for very long since Sac State started to pepper back at them with attack after attack. Ultimately, it was No. 10 for the Hornets who helped find his team level at 1-1. Sac State junior midfielder Dominic Scotti belted in a well hit shot from almost 18 yards out and found himself with a lucky deflection of a Gaucho defender as the ball rolled into the back of the net. Now tied at one a piece, tensions on both sides began to simmer down and the half time whistle sounded as both teams returned to their locker rooms in order to formulate a better plan of attack.

Both head coaches made the substitutions they deemed necessary in order to alter the attacking momentum, but it was to no avail. The second half of play pretty much was a defensive spectacle as both lines held their own on each side of the final thirds of the pitch. Only a combined two more shots on goal were recorded for the two teams. Soon enough, the final whistle came and the pressure was on as exhaustion began to creep in on both sides.

The overtime ruling was simple; both sides would continue playing through the game clock until one side scored. Once again, the passing was present once more as the two teams chose to patiently chart out their plan of attack. But Michael only needed one more try at the goal in order to award his team with a much deserved victory. This time assisted, it was sophomore forward Ignacio Tellechea who picked out an open Michael. Then, with an almost clear line of sight at the goal, he curled in his shot into the far right of the net. The team celebrations then began for UCSB as the close bout turned into three points and a well-earned victory.

After this performance, Tellechea now finds himself in second place on the team’s assist category. But who’s in first you ask? Well it’s the so far undisputed team MVP: Rodney Michael. Michael now has a grand total of four assists, but most impressively he’s now recorded seven goals in his seven matches played on the season. Thus, he must now be in consideration when the league MVP talks commence later on in the year.

The Gauchos now improve to the No. 1 overall spot in the Big West conference rankings with their total of 14 points in seven matches. They’ll look to cement their position and add to their tally this weekend in a home game against the division’s second place team: UC Davis.